A Tale of Two: The COVID-19 Pandemic and the Rule of Law in Cyprus

Once the first case of COVID-19 was reported on 9 March 2020, the Republic of Cyprus introduced emergency measures to contain the spread of the virus, as per the powers granted under the Constitution in the event of emergency. Following scientific advice, the Cypriot Government responded quickly by limiting temporarily personal freedoms guaranteed by the Constitution, disrupting once again the constitutional legal order.

Under Article 183 of the Constitution, a Proclamation of Emergency can be made “in case of war or other public danger threatening the life of the Republic or any part thereof” giving the Council of Ministers the power to suspend specific provisions of the Constitution. While there seems to be no official readily available transcript of any Proclamation of Emergency regarding the current pandemic, the President addressing the public in early March referred to the current situation as ‘war’.  In a state of emergency, the law can be contained in the name of the general public interest vis-à-vis the current state of affairs. ‘Contained’ law should not mean diminished law in times of emergency or crisis. An inevitable question thus arises. Amid the measures taken to address the COVID-19 pandemic and its consequences, to what extent is the Rule of Law safe in the Republic of Cyprus?

The constitutional legal order has been long disrupted by the law of necessity following the 1963 constitutional crisis and the 1974 Turkish invasion and occupation of territories of the Republic (Κρίτωνος Γ Τορναρίτη, Ιδιορρυθμίες του Κυπριακού Συντάγματος και Επιπτώσεις στην Ομαλή Λειτουργία του Κράτους (Λευκωσία 1980) (in Greek)). The Constitution of the Republic of Cyprus is based on bi-communalism. After the withdrawal of the Turkish-Cypriot community from various posts in 1963, the Supreme Court of Cyprus provided margin of manoeuvre for the continuance of a functional State under the doctrine of necessity in the Mustafa Ibrahim case in 1964. Since then, the doctrine of necessity allegedly allows to ‘restore’ order within the country. Amid the COVID-19 pandemic, the case of the Republic of Cyprus exemplifies the challenges posed by COVID-19 emergency to the Rule of Law, in the framework of an already long-standing constitutional anomaly.

The doctrine of separation of powers is intrinsically related to the adoption of emergency measures in times of crisis. In Cyprus, the separation of powers is diffused in the constitutional fabric where different parts of the Constitution delimit the role of each branch of government. The executive branch, consisting (by default) of the President and the Council of Ministers, is perceived as very powerful. The legislative power, exercised by the House of Representatives, is perceived as relatively weak and ‘inter-dependent’ of the executive, as political parties strive to pursue party lines and/or governmental agendas. The relative power of the legislature can be illustrated through landmark case-law such as President of the Republic v. House of Representatives which clarifies that the legislature has the exclusive authority to legislate but that in instances where the content of an act has its centre of gravity in the executive branch, the power is conferred exclusively to the executive branch. In times of emergency, therefore, certain measures can be taken directly by the executive in the form of ‘Acts of Government’, which may escape certain fundamental democratic and/or constitutional mechanisms of scrutiny and control, while the Parliament plays a subordinate role. Amid the pandemic, following a hesitant start and consultation with various stakeholders (primarily the dominant Greek-Cypriot community), the public health and economic policy responses of the Government have been vigorous. As the measures stand at the time of writing and until 30 April 2020 initially, a partial curfew is in place, with a single text-based permission system for individual mobility (with exceptions for essential workers and services), while other measures relating to the workforce and businesses have been taken. As a member of the EU and of the Eurozone, the Government, financial institutions and essential services of the country also have access to EU support and resources to withstand the crisis, surrounded by mounting debate around the legitimacy, adequacy and/or accountability of certain of these measures.

Overall, the Republic of Cyprus has enacted and implemented through decrees, laws, regulations and/or other acts and measures, special coronavirus protection protocols in line with the guidance and direction of its Government, the EU institutions and agencies, and the WHO. These include deferring all non-essential international travel to and from the island and following applicable self-isolation and quarantine recommendations. Such measures are reviewed regularly based on needs and levels of emergency. As such measures are expected to undergo an adequate and robust proportionality test in due course, including through judicial scrutiny and exposure to the Rule of Law principles, especially if and when taken on the ground of emergency.

One of the issues raised while implementing the emergency measures in Cyprus was the need to obtain a health certificate prior to the entrance into the Republic. This applied for Cypriots and non-Cypriots alike but affected specific groups of individuals of Cypriot origins and/or permanent residents of Cyprus, temporarily studying or residing abroad, more than others. In general terms, the right of a citizen to enter their country is a human right which can only be subject to proportionate restrictions for overriding interest purposes such as public safety, public order, threat to life, physical integrity, etc. Article 14 of the Constitution (no citizen shall be banished or excluded from the Republic under any circumstances) does not give the right to any government to impose any restrictions and/or arbitrary conditions regarding the entrance of its citizen. But the exercise of that right in the context of the COVID-19 pandemic may not constitute an unlawful prohibition to individual rights.

The implementation of the measure however tumbled on some practical considerations which led the Government to make arrangements for the gradual repatriation of citizens and of other residents on legitimate grounds. The obligation to obtain a health certificate may not constitute an absolute ban, unlawful restriction and/or direct discrimination on entry in violation of Article 14 and EU principles and values. It remains however that such measures may impose a higher burden on specific categories of Cypriot citizens or residents, the ones currently abroad who may be in a vulnerable position, and may lead to reverse discrimination. It should be noted that since the accession of the Republic of Cyprus to the EU in 2004 and for the time being, the territory of the Republic of Cyprus lies outside the scope of the Schengen area. Whether or not State measures are proportionate is eventually a matter of legal scrutiny.

In the wider context of migration in the Mediterranean and Europe, there is growing concern and urgency concerning the population of migrants having to face the COVID-19 pandemic in countries of the Mediterranean hardly hit by the migration crisis including Cyprus. On 20 March 2020, the coastguard of the Republic deterred a vessel with approximately 175 illegal migrants from approaching the island. On its territory, the Republic has introduced measures in reception facilities, including social distancing/quarantine, which may have affected further access to legal aid and social services. Reception centres remain overcrowded while health issues due to overcrowding had been reported even prior to the pandemic. Such State responses to the pandemic have affected migrants even more than before, endangering their internationally protected status and/or rights.

Access and administration of justice in times of COVID-19 pandemic

The judiciary could appear to be the most independent branch of government, eventually exercising judicial control on the constitutionality of measures taken. For the time being however, if no sufficient safeguards are put in place, the situation may lead to a scenario of ‘denial of justice’ exacerbated by the pandemic. On 16 March 2020, the Supreme Court of Cyprus suspended the operation of the courts in the Republic of Cyprus in all instances until 30 April 2020 or until further notice, except for extremely urgent matters as may be outlined in the relevant Regulations or where prior leave of the Court is obtained for the filing or the hearing of a matter within the said period. As such, trials scheduled are by default adjourned, causing further delays in the system and hampering to a great extent access to and the administration of justice. The Court issued a relevant announcement specifying what might be heard regarding both criminal and civil cases leaving a margin of discretion to each court to decide whether an issue is extremely urgent or not.

Under ‘ordinary’ circumstances, the average time reported for the completion of a legal action in Cyprus is six years. The fact that there are very limited means to hear cases virtually in Cyprus will, in all likelihood, create a reservoir of cases, potentially in violation of the right to fair trial.  The President of the Pancyprian Bar Association requested in a letter to the Supreme Court dated 16 April 2020 that the Courts should be declared to be essential services, that the trial of cases which do not require the physical presence of the parties and/or lawyers (i.e. applications) should go ahead and/or the full refunctioning of criminal courts for all cases, not only the exceptions provided in the relevant announcements due to the pandemic. Under Articles 6 ECHR and 47 EU Charter respectively, the right of access to court is not unlimited. It can be restricted in some instances, i.e. where there is a legitimate interest in restricting rights of access to a court, provided the limitation is not disproportionately restrictive and such measures are temporary.

Is the Rule of Law safe? Some initial observations

Containing the spread of COVID-19 and protecting migrants poses particular challenges, especially within the overcrowded settings. Even though camps far exceeded their capacities, approximately 800 more people were to be relocated in late March, as asylum seekers residing in hotels were required to vacate those premises. Moreover, FRA reports high risks of neglect as restrictions on the freedom of movement in refugee centres hinders their access to basic facilities such as health facilities.

The education of migrant children and/or refugees has been disrupted as they do not have access to internet and digital equipment. In the meantime, alleged incidents of police brutality and domestic violence have been reported by individuals and/or NGOs. There is concern that more women are calling support hotlines since the beginning of the outbreak, while relevant associations allegedly report an approximation of 30% rise in such incidents. The pandemic should not be seen by national authorities as a period of status quo; on the contrary, the criminal justice system and branches of government should remain high on alert and sustain individual rights. Many constitutional provisions, other than the ones developed in this Blog, have been affected directly or indirectly by the crisis, such as Articles 7, 11, 13, 18, 21 and 25 of the Constitution (right to life, liberty, free movement, freedom of religion, freedom of assembly and right to carry on any occupation respectively) raising concern over the safety of the Rule of Law in the Republic and demanding a robust monitoring of temporary measures. The upholding of the Rule of Law in times of crisis, including during a global pandemic, constitutes however a global challenge to be addressed through coordinated, multi-level and inclusive democratic responses underpinned by scientific evidence and based on shared fundamental values and principles. 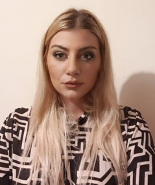