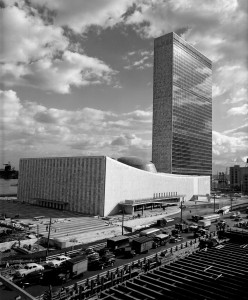 Anne Orford is the Michael D Kirby Professor of International Law at Melbourne Law School. In her recent work, including her much discussed book International Authority and the Responsibility to Protect (Cambridge University Press, 2011), she situates the „responsibility to protect“ concept in a broad historical and jurisprudential context, demonstrating that the appeal to protection as the basis for de facto authority has emerged at times of civil war or revolution – the Protestant revolutions of early modern Europe, the bourgeois and communist revolutions of the following centuries, and the revolution that is decolonisation. From Hobbes to the UN, Orford offers a critical inquiry into the contemporary international order. While UN Secretary General Ban Ki-Moon offered an agenda to convert R2P from promise to practise, Orford turns that understanding on its head, by arguing that R2P processed UN deeds from 1945 to 2005 into words.

In her Berlin Rechtskulturen Lecture, Anne Orford will further elaborate on her argument, and trace the origins of the idea that the authority of states and the international community is grounded on the capacity to provide protection back to the political and legal theorists Thomas Hobbes and Carl Schmitt:

In his classic treatise Leviathan, published in 1651, Thomas Hobbes sought to show that in a world fractured by religious warfare, where tradition, revelation, and shared values no longer guaranteed meaning, the lawfulness of authority could only be grounded upon the capacity to protect. In making that argument, Hobbes was part of a broader struggle between church and state, or spiritual and temporal authority. Central to that struggle was the question of whether the Pope had jurisdiction to declare that a ruler was unlawful and should be deposed or resisted. For many sovereigns and their advisors throughout Europe, the papal claim to depose or denounce kings had become a threat to European peace. While theologians developed detailed arguments explaining why spiritual authority was superior to temporal authority, it was Hobbes who developed a systematic argument in support of the superior jurisdiction of the state. In addressing the question of which concrete institution decides what is temporal and what is spiritual, what lies within the absolute authority of the state and what lies outside, Hobbes provided an account of the state as a clear alternative to the church’s monopoly on decision-making. According to Carl Schmitt in Political Theology II, Hobbes thus ‘brought the Reformation to a conclusion’. Today, the question of who decides whether a ruler is legitimate and on what grounds has not disappeared, but it has changed form. This lecture will explore the persistence of this question in debates about the responsibility to protect concept and its utilisation to justify international action in response to the Arab Spring.