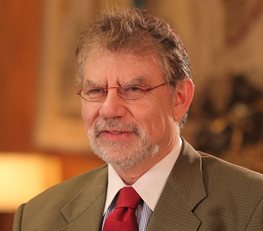 Joseph H.H. Weiler is a Professor at NYU School of Law, Senior Fellow at the Harvard Centre for European Studies, and former President of the European University Institute, Florence (2013-2016).

The EU may reasonably expect a guarantee that Brexit will not compromise the integrity of its customs and regulatory territory. Hence the insistence on the Backstop. The UK reasonably expects a guarantee that it will not be locked into a permanent Customs (and regulatory) Union with the EU unless it elects to do so. Hence its rejection of the Backstop. The resulting deadlock is hurling both parties into a No-Deal Brexit.

Despite a certain softening of rhetoric on both sides, they still resemble two characters out of a James Dean movie, racing toward the precipice each hoping the other will blink first. At this rate they might well race over the edge of the cliff, and then the blame game will begin.

Last week, together with two colleagues, Daniel Sarmiento and Sir Jonathan Faull (all three of us firm Remainers) we published a plan which, if adopted, could avoid this fate. This proposal, which includes features which have never been discussed, will guarantee the integrity and autonomy of the EU’s and UK’s respective customs and regulatory territories, and will require neither a Customs Union between the two unless that is the wish of both, nor a hard border between Northern Ireland and the Republic.

The Proposal evoked considerable resonance in several media, both positive and negative; many questions were asked to which we tried to answer in a FAQ.

It is to one reaction, attributed in the Press to anonymous Commission sources that I wish to react. And I wish to emphasize that in this comment I speak only for myself.

I do not do this solely or even mainly in order to defend the viability of our particular Proposal – I am confident that our proposal has sufficient novel and constructive ideas that could be helpful to find a way out of the current deadlock. I do so because I fear that this same reaction of these anonymous EU officials will meet any proposal for “alternative arrangements” to be put on the table by the UK government.

The polite form of this objection takes the form of “We cannot be expected to outsource control of the integrity of our market place to third parties”. The less polite form, which we have heard from a few officials with whom we discussed our Proposal has been: “We can’t trust the Brits” (see here, for example).

The current Backstop as it stands would already rely extensively on the integrity of the UK legal system and UK officials to collect the Common External Tariff of the projected Customs Union and to ensure that UK manufactured goods comply with the EU regulatory standards to give but two of many examples. Is this, then, not “outsourcing”? In some cases as part of the Backstop the Union has insisted on on-site inspection and supervision by Union officials. That is included in our alternative Proposal too, albeit, importantly, on a reciprocal basis. In effect our proposal introduces all the cooperation procedures introduced in the Backstop, but it adds further instruments, as well as domestic remedies, including criminal penalties, to ensure effective enforcement. Furthermore, the proposal incorporates a dispute settlement mechanism based on the withdrawal agreement’s enforcement mechanisms. Overall, then, this can hardly be considered to be any more “outsourcing” of the customs union than the Backstop itself envisages – in fact it is less. And, not to be forgotten, the UK under the Proposal would be “outsourcing” control of the integrity of its customs and regulatory territory to the Republic. What is sauce for the goose is sauce for the gander. It is somewhat perverse to characterize an arrangement based on reciprocal enforcement, joint inspections, close cooperation and mutual trust as being a form of unacceptable “outsourcing” to a third state.

And if the premise of any agreement is that one cannot trust the other partner, the Backstop is doomed. Without a modicum of trust it, too, will not work. Indeed, a Proposal such as ours which (unlike the Backstop) ensures parity of rights and obligations on both parties and reciprocal arrangements for UK exports to the Union and EU exports to the UK removes an incentive to sabotage the agreement and creates a mutual incentive to see it succeed.

In the Backstop the Union has insisted, totally correctly in our view, that any questions which arise in the UK as to the correct interpretation of EU standards applicable to UK goods, must be decided by the European Court of Justice. Of course this sensible requirement raised some hackles just because of the symbolism involved. In our Proposal which applies the principle of parity of rights and obligations between the two parties, we suggested that if there is a question of the interpretation of British standards of goods in Ireland destined for the UK, British courts should have the final word, using the same sensible logic adopted in the Backstop. Here, too, it is hard to explain the shrieks of alarm raised in certain Irish quarters. In neither case is the autonomy, sovereignty or independence of the local courts called into question. The final word, after all, will come out of the mouth of local judges. It is just that if the law applicable is not that of the forum, it makes sense that courts of that applicable law should assist the local court in giving the correct interpretation.

I can understand that it might be difficult for certain officials who have insisted for close to two years that the current Backstop is the only way to ensure the integrity of the EU market to accept that there may be other ways which achieve the same objective without the considerable drawbacks of the Backstop. If that attitude is to prevail, responsibility for a No-Deal Brexit, should it happen, will have to be shared by the Union too.