Cryptocurrencies: A ‘Sandbox for Regulators’?

Bitcoin stands like no other cryptocurrency for the profound transformation of financial markets in the digital economy. While the last few months saw the free trade in goods struggle against trends towards protectionism, cryptocurrencies seemed to tear down one border after the other – physical, geographic, and legal ones alike. A libertarian’s wet dream. Blockchain presents itself as a fortress against state intervention, for whatever purpose. Finally, a technological, market-based solution would put an end to the problem of monetary policy, payment transactions, and make whole chunks of government regulation superfluous.

For others, the rise of blockchain constitutes a pipedream that will lead nowhere, or nothing short of a nightmare. Financial markets suddenly appear again as unregulated as they were before the Global Financial Crisis, only that this time, the regulatory solution would be less than obvious. The anonymity and decentralized structure of distributed ledger technologies, the IT backbone of cryptocurrencies, would make effective regulation by traditional instruments like licensing, trade limits, etc., rather difficult even in the unlikely event that the world would reach agreement on the need and ways of regulating them in the foreseeable future. Opinions about the “what” and “how” of regulation are sharply divided. While China is concerned about the effectiveness of its capital controls and the environmental impact of Bitcoin mining, the United States seem to be chiefly worried about use of Bitcoin for illicit activities, such as money laundering and tax evasion, and the risks to financial stability seem to be key issues in Europe, Korea, and Japan. Unilateral regulation is difficult to achieve. Unsurprisingly, financial regulators and supervisors chose for the most part a ‘wait and see’ tactic until late in 2017, treating cryptocurrencies as a minor glitch in the world of international finance.

The unprecedented price hikes of cryptocurrencies towards the end of 2017, however, made the need for regulation imminent. Not long ago, only IT and finance geeks knew how to buy, sell, and assess the risks of cryptocurrencies. The advent of user-friendly services, which allow ordinary consumers to effortlessly buy cryptocurrencies, prepared a fertile ground for a rush on the market for cryptocurrencies. The seeds germinated with the start of trades in Bitcoin future contracts on major options exchanges CME and CBOE. Moreover, fintech companies engaging in the market for cryptorcurrencies might have profited from so-called regulatory sandboxes, i.e. special regimes providing for temporary, conditional exceptions to regulatory requirements, which a number of countries have established in order to attract fintech companies. A speculative mania ensued.

And then the unexpected happened. A sort of regulation kicked in much more quickly than foreseen, in a form that had not been expected, and turned out to be much more effective than imagined. It began at the height of the Bitcoin bubble, when the French government thought loudly about putting the regulation of cryptocurrencies on the agenda of the G20. Others followed soon. We track the interventions of various supervisors and regulators in graph 1. Some of them seem to have triggered sharp declines in the value of Bitcoin. Others have hardly any perceptible effect. Our interpretation is that factors determining the (potential) impact of a statement on the value of Bitcoin include (1) the importance of the actor for financial markets in general and the size of the respective national or regional market; (2) the novelty of the announcement; (3) the character of the announcement: warnings addressed to consumers have usually triggered a much milder market reaction than proposals to find international agreement on a regulatory framework, or even concrete unilateral steps to ban cryptocurrencies or specific aspects of them. 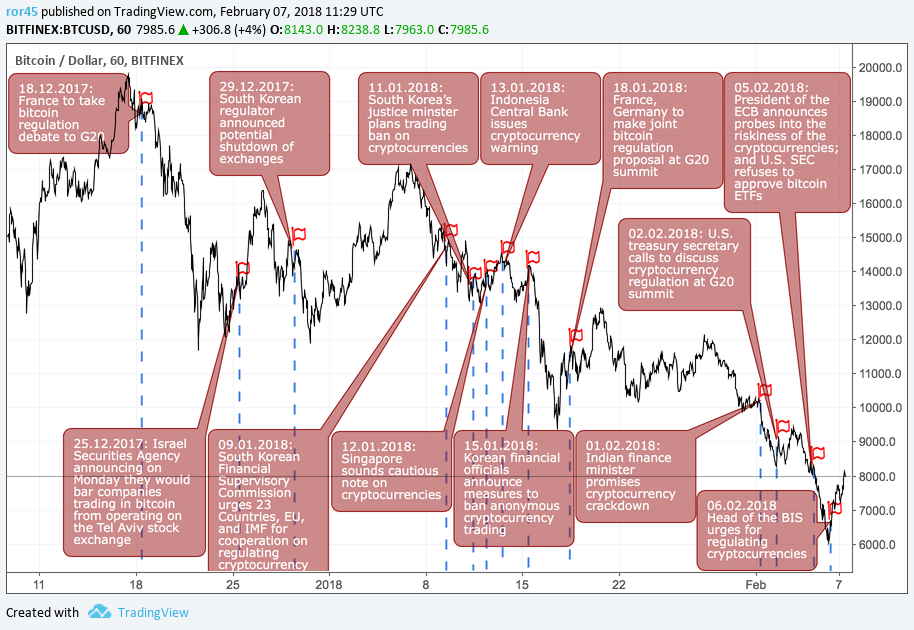 The success of these interventions was considerable. They can be identified as one of the main factors that drove asset prices down, thereby preventing destabilizing bubbles. To be sure, as of the time of writing, prices have gone up somewhat again and are still highly volatile. But the big bubble has burst and does not grow any further. High volatility of one asset is harmless as long as it does not have systemic effects – which seems to be less the case since the massive inflows into the cryptocurrency market have declined.

In a tongue-in-cheek sense, this behavior of supervisory and regulatory authorities can be described as the distributed ledger technology of financial supervision. It is distributed because it does not have a clear center. The G20 seems to be the common reference point for many actors, but it does not speak itself. It is like a shared code. Some statements may have resulted from coordination, such as the speech of the BIS head Augustín Carstens in Frankfurt in February in the presence of Bundesbank president Weidmann. But on the whole, there is no uniform strategy discernible behind these statements. Mario Draghi’s remarks in the European Parliament on the day before, for example, were made in response to questions by MEPs.

The ledger consists in the virtual public record, the collective memory of supervisory proclamations. Supervisors and regulators often seek the public limelight for their communication. This is what makes their communication effective. Words are deeds here: Every public statement by a regulator produces an entry in the virtual ledger of cryptocurrency markets and provides forward guidance in a market fraught with regulatory uncertainty.

This guidance has been largely virtual, consisting in warnings, programmatic statements and declarations of intent. Only in a few cases the statements quickly gave rise to concrete regulatory measures. For example, China took a stalwart position against cryptocurrencies by actually banning initial coin offerings, ordering the closure of cryptocurrency exchanges and trying to shut down Bitcoin ‘mines’. Also, South Korea has resorted to regulatory intervention, banning foreigners from their cryptocurrency exchanges. By contrast, other regulators and supervisors confined themselves to alerts and proposals to regulate cryptocurrencies, but rarely resorted to concrete actions.

The experience of the supervisory response to the cryptocurrency bubble of the past months keeps important insights for any prospective regulation of cryptocurrencies. First, communication is key in the regulation of blockchain. In the short term, public statements are probably the most effective tool. Financial markets are all about expectations of future returns. Public statements manage these expectations, a fact well-known in monetary policy that now becomes more relevant for financial regulation. This raises a number of legal issues, such as the question of appropriate procedural safeguards that ensure the legitimacy without compromising the effectiveness of these highly discretionary instruments. Moreover, it appears necessary to extent judicial review accordingly. For instance, in Europe, Art. 263 (1) TFEU stipulates that only measures producing “legal effects” may be subject to judicial scrutiny. One might interpret this notion in a broader fashion, in the sense that it covers measures producing effects that are qualitatively equivalent to “legal effects”, or that anticipate regulation and commit the supervisory authority to a certain demarche.

The second insight relates to the incredible speed of fintech innovations. Regulation needs to keep up with it, yet it requires lengthy negotiations at the domestic and possibly also at the international levels. One cannot run the risk of a large bubble with potentially systemic effects just because it is not possible to put regulation in place quickly enough. So far, some regulators have addressed this challenge by adopting a ‘sandbox’ approach. It relies on experimentation and supervisory discretion, allowing startups to set up a business within a defined area for a certain time under relaxed regulatory requirements. Examples include the UK, Singapore, Australia, Bahrain, Luxembourg and Switzerland. The latter allows fintechs to receive deposits of up to 1 million CHF without requiring a bank license. More countires are following in the same direction, e.g. Lithuania is planning to launch blockchain sandbox platform-service in 2019.

However, sandbox approaches clearly call for international coordination. Otherwise, they are likely to cause risks by incentivizing regulatory arbitrage and potentially harmful competition. How should such international coordination look like? To achieve a balance between safety and innovation, it should emulate the experimental character of sandboxes. One could think of a ‘sandbox for regulators’: an arrangement that would not immediately and prematurely engage in legal regulation, but facilitate, first, the exchange of information among regulators and supervisors, and second, coordinated communication and forward guidance. Regulators and supervisors could flag their views as experimental, temporary, and subject to revision. There are enough international venues which could provide a framework for that, including the Financial Stability Board, the BIS/the Basel Committee or the IMF. Ultimately, the sandbox for regulators might become an incubator for faster, more flexible, incremental, and ultimately more sustainable regulation at the European and international levels.

No Comments Join the discussion
""
Go to Top