The Eurozenship debate has generated a wealth of ideas and interesting proposals. Both Willem and Liav have summarised them wonderfully and thus there is little to be gained from reiterating the contributors’ various positions here. What I would like to do in this brief rejoinder is to consider, and reflect on, four main themes that have emerged in the critiques of my Eurozenship proposal.

I read the contributions to the debate during a brief trip to Frankfurt (Oder) a couple of weeks ago. Walking along the bridge connecting two cities and two countries (i.e., Germany and Poland), being on the ‘border’ without being stopped by a border guard and walking leisurely without seeing either a wall or a fence or barbed wire sharpens one’s view of historical time. Reinhart Koselleck’s once wrote ‘there is no history which could be constituted independently of the experiences and expectations of active human agents.’ Who could have expected the human exodus from DDR and the reunification of Germany? Had anyone predicted the collapse of Tito’s Yugoslavia – a past mentioned in Jelena’s introduction? Had Mr Gove and Mr Johnson, key architects of the British ‘Leave the EU’ campaign, predicted the outcome of the EU membership referendum of 23 June 2016? The answer to the above questions is a negative one.

The historico-political field is full of ‘mushrooms emerging from the earth’ unexpectedly. But it is also cultivated and nurtured by the expectations, struggles, ideas for reform and actions of human beings. ‘Mushroom reasoning’, which Richard is so keen to criticise, necessarily accompanies ‘mushrooming politics’ and, thus, ‘mushrooming history’. At the same time, the latter cannot be divorced from ordinary human beings’ convictions that the suffering inflicted on them by arbitrary will, power, wealth, prejudice, dogma or ideology is unnecessary and that their future does not have to resemble the present or the past. The European unification process has solidified this realisation.

Not everything begins with states. Richard sees the EU ‘as the creature of the contracting states’, a system that ‘operates through their sovereign systems’ and as an order based on reciprocity. I do not share such views. I find it almost impossible to bracket the role of social mobilisation and collective action (e.g., proto-federalist and federalist movements, European unification initiatives, peace movements, anti-fascist mobilisation and so on), non-state actors and of what I call subversive memories of wars, atrocities and destruction of life in the European integration process. Nor do I subscribe to the view that the EU legal order is based on reciprocity, as Richard states, or on pooled sovereignty, as Rainer argues, – the Court of Justice has categorically denied this throughout the decades.

In addition, I do not agree with Richard’s contention that ‘the related and most valued rights [of EU Citizenship] are, for the most part, not rights that are offered by EU institutions – the notable exception being the right to vote in European Parliament elections- but rights that are upheld by the constituent states’. EU citizenship tights are upheld by the Member States precisely because they are provided by EU institutions and enforcement proceedings will follow if the Member States breach their obligations under EU law. Dimitris has eloquently expressed this. He has argued that a republican democratic account would support the grant of voting rights at EP elections to all members of ‘the public’, irrespective of their nationality. Oliver fully shares this point of view and has provided good justifications for this. Democracy is closer to a republican Europe of peoples rather than a republican Europe of states.

Rainer argues that this can be achieved by national citizenship reform and greater inclusivity in national arenas. No one would object to this; there is no disagreement among the participants here. Jean-Thomas’s contribution complements this position by being explicit on the desirable national citizenship reforms; namely, expanding municipal franchise to all residents in all Member States and limiting the Member States’ power to ‘super-or-down size the European citizenry’ in violation of EU law. However, the issue at stake is that, given that such reforms at national level have not taken place for years and seem unlikely to take place in the near future, why should we not consider making EU citizenship more inclusive and responsive to the needs of Europe’s residents?

Rainer’s response is that this cannot be done because the ‘two levels of government are constitutionally intertwined’. But why should this constitutional fact lead us to believe that citizenship at one level must be derived exclusively from citizenship at the other level? After all, we know that such a derivation is not prescribed in a deterministic way; it is a ‘historically preferred’ derivation, that is, it was politically agreed in the 1960s with respect to the beneficiaries of free movement and residence. It has been sedimented in law since then. But political choices are changeable and ‘contingent combinations’ are alterable. Of course, the Member States would object that the proposed disentanglement of citizenships would interfere with their doctrines of national sovereignty and their juridico-political choices, as Daniel and Eva wonderfully show with respect to Denmark and Germany, respectively, and Jelena remarks with respect to divergent definitions of residence. In response, Jules notes the didactic role of history in his conclusion; there is a historical precedent and therefore ‘it is worth giving an autonomous EU citizenship a try’ (Jules Lepoutre) or welcoming ‘a leap of faith’ (Oliver Garner).

Either national citizenship or Eurozenship?

My argument for Eurozenship did not, and could not, map out all possible reforms which could be taken at national or EU levels. Nor was my intention to argue that a reconstruction of EU citizenship along the lines I proposed would solve all problems. The contributors to this debate outlined a number of reforms, while Willem makes a convincing case for the simultaneous strengthening of citizenship at both levels. I fully agree with Willem and have consistently defended reforms in the material scope of EU citizenship and a social citizenship in the EU for more than two decades. In this forum I only reflected on one question: ‘who should be a citizen of the European Union?’. I did not focus on the rights EU citizens ought to have or how national citizenship could become less restrictive. I agree with both Willem and Liav that a reconstruction of EU citizenship would be inherently productive if it gained support from a wide range of actors, gave expression to real ties of social solidarity and changed power imbalances and ideological interests. EU citizenship reform is not a matter of ‘either/or’ in the same way that one cannot make a convincing case about democratic deficits in the EU without addressing democratic deficits in the Member States and their role in generating democratic deficits in the EU.

On institutional change, Brexit and emancipation

It is true that the character, pace and direction of institutional change in this domain will not be determined by our contributions to this debate. Such an expectation would not be realistic. And although the intellectual temper of the present era counsels against radicalism and our life and mind are saturated with the Brexit discourse and politics, we should not forget that democracy at all levels is essentially about the quality of human experience and the richness of associated life. Brexit has lessened the quality of both and thus it can hardly function as a compass for future reforms. Unlike Liav, I am rather hesitant to conclude that it can serve ‘Europe’s constitutional moment to reform its citizenship regimes’. Brexit has highlighted the mistakes in constructing an equivalence among demagogy, demography (that is, the aggregation of votes) and democracy and in dividing deeply communities and societies at all levels of governance. The spirit of emancipated, internationalist democracy and human solidarity is steady blowing and must be galvanised for it is this spirit that turns walls of all sorts, which narrow morality and human empathy, into bridges, like the bridge I walked on a couple of weeks ago in Frankfurt (Oder). 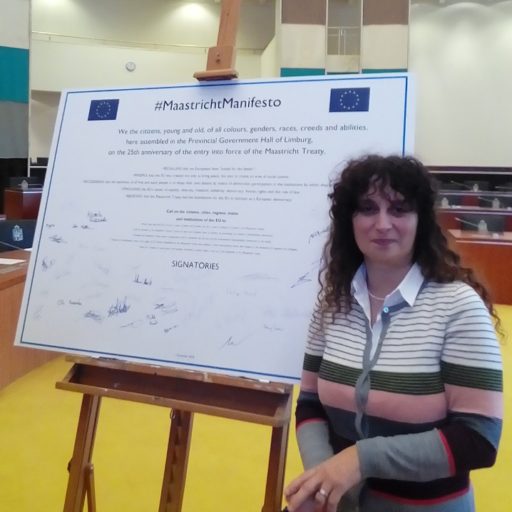