Judicial Reform in Times of War

Russia launched its big war against Ukraine at a time when Ukraine has started implementing a comprehensive and genuine judicial reform. Ukraine has not only managed to resist the attack but also kept implementing the reforms and strengthening democratic institutions. This article describes the Ukrainian experience of the functioning of the judiciary and reforming judicial governance institutions during martial law times. The key lessons and successful solutions may become a beacon for the entire region.

So, given your professional experience, how would you reform the High Council of Justice?

For the last eight years, I have been working on holding judges who took arbitrary and illegal decisions accountable. I know the problems of the judiciary and I know how to solve it. I also believe that the future composition of the High Council of Justice will be able to introduce a qualitative change.

This dialogue took place on 23 February 2022, a day before Russia launched a full-scale invasion of the territory of Ukraine. The man answering questions is a Ukrainian lawyer who applied for the High Council of Justice and the man asking them is a retired US judge invited to help with the integrity scrutiny of the candidates.

Open interviews with the candidates for the highest positions in the judiciary are part of an ambitious and bold judicial reform in Ukraine that envisions an open and transparent selection process with the involvement of international experts.

Russian bombings and missile attacks suspended the implementation of the reform for several months, but did not cancel it. Ukrainian judiciary had to deal with urgent crises evacuating courts from the frontline and saving the lives of its personnel. Once the situation stabilized, the reform resumed after a few months.

How the Ukrainian judiciary responded to the challenges of war

To start with, the judicial system of Ukraine was poorly prepared for a shock to the system. Only a few days before the invasion, ten members of the High Council of Justice (HCJ) voluntarily resigned because they did not want to pass an independent integrity assesment, and the agency became unfunctional. The HCJ is the most important and powerful institution within the judicial system of Ukraine: It decides on the appointment and dismissal of judges, administers disciplinary responsibility, takes decisions on temporary suspension and authorizes the arrest of judges. So, when Russia launched the full-scale invasion, unfortunately, there was no institution to give instructions to courts, prepare and coordinate the evacuation of case materials and take care of the personnel.

At the beginning of March, the Ukrainian Parliament took emergency measures by amending the legislation and transferring some of the HCJ functions which are not safeguarded by the Constitution to the Chief Justice of the Supreme Court. Chief Justice immediately took leadership by seconding judges from newly occupied territories and changing the jurisdiction of some courts. Importantly, the judiciary continued operating under constant air strikes and electricity blackouts. In sum, the Ukrainian judiciary managed to adapt and demonstrate resilience, although it will not be able to keep functioning in the long-term without the HCJ.

What is judicial reform in Ukraine about

In July 2021, the Parliament of Ukraine launched a comprehensive reform of judicial governance. The previous attempts taken after the Euromaidan Revolution in 2013-2014 failed. The main lesson we learned is that establishing a new Supreme Court from scratch, increasing transparency, introducing integrity and financial checks of judges cannot lead to expected results if those who make decisions are not trusted and lack independence.

For this reason, the main objective of the reform launched in 2021 was to ensure that the High Council of Justice and the High Qualification Commission of Judges (another judicial governing agency responsible for the selection and evaluation of judges, HQCJ) are composed of highly qualified, independent and honest professionals. The reform suggested that the members of the HCJ and the HQCJ are selected through open and transparent competitions with the involvement of independent international experts. Importantly, international experts were granted decisive votes in the process.

In November 2021, the Ethics Council, the body established for the integrity assessment of future HCJ members, was established. It is composed of three Ukrainian judges nominated by the judiciary and three foreigners nominated by international donors. Due to the Russian invasion, the Ethics Council had to suspend its work, but in April the interviews with the candidates were re-started. As of November 2022, the Ethics Council scrutinized nearly 100 candidates and made recommendations, so it is expected that in the next two-three month the new members will be appointed, and the HCJ will be functioning again.

Furthermore, in January the Competition Commission – a similar body established for the selection of the HQJC members – launched a competition. The process was delayed due to the invasion; however, Russians could not stop this reform either. Now 300 candidates are competing for 16 positions, the competition will probably be finished in spring 2023.

Judicial reform and the European integration

In June, the EU members states voted for granting the EU-candidate status to Ukraine. It was not only a strong act of support demonstrated by European partners, but also a recognition of the progress Ukraine has made since 2014. In fact, the transformation of the country over past years is truly impressive.

For the last eight years, Ukraine has made giant steps toward countering corruption and building independent democratic institutions. In 2016, we launched the award-winning electronic procurement system ProZorro and opened state registries. We made our officials openly declare their assets and lifestyle. More than 700,000 assets declarations are submitted annually in Ukraine, nearly 1,000 are fully checked by a special corruption prevention agency each year. Ukraine is one of a few countries in the world with a comprehensive automatic cross-check system. To tackle high-level corruption, we established a system of new independent anti-corruption institutions from scratch.

Without a doubt, Ukraine still has a lot of homework to do in order to actually start the EU accession process. The hardest and the most important tasks lie in the area of the rule of law. The EU institutions will evaluate Ukraine‘s compliance with the standards of the union. However, since the EU considers the judiciary as an internal matter of member states and, therefore, does not have detailed requirements, Ukraine‘s judiciary will be evaluated through the lens of the Council of Europe and Venice Commission recommendations.

The tricky thing here is that the changes Ukraine has to implement in order to ensure independence and integrity of the judiciary are not in line with the recommendations of the Council of Europe and so-called “European standards”. One of the most harmful is the idea that the main guarantee of the independence of the judiciary is self-governance and non-involvement of other actors in selection and disciplining of judges.

Why “judges governed by judges” concept safeguards corporatism but not independence

Ukraine started building judicial governing institutions in early 2010. For the first time the HCJ and the HQCJ received real powers in selecting and disciplining of judges. Then after the Euromaidan Revolution the judicial councils were strengthened. In 2016, constitutional amendments depriving Parliament of its powers to appoint and dismiss judges and making the role of the president rather ceremonial were adopted. European partners welcomed these developments, believing reducing formal political influence would equal ensuring judicial independence. In practice, this led to the opposite – the judiciary became more dependent and lost accountability.

It is important to note here that according to the Constitution of Ukraine the majority of the HCJ members are judges elected by their peers. Thus, the most influential groups within the judiciary, which are often referred to as “clans”, received full control over the selection and disciplining of judges. Here are two examples.

In 2018, the Congress of Judges of Ukraine had to select four HCJ members out of 23 candidates. The day before the voting, civil society activist published four names of supposedly pre-approved candidates received from whistleblowers inside the system. The next day all four candidates were appointed. The same happened in 2021. This proves that judges did not vote independently, they were convinced to vote in support of concrete candidates, supposedly in exchange for future favours and cover ups of their disciplinary misconduct.

Another example is the criminal case against judges of the District Administrative Court of Kyiv (DACK). In summer 2019, the National Anti-Corruption Bureau revealed large scale corruption crimes supposedly committed by judges. In particular, DACK judges are accused of the creation of a criminal group, bribery, taking illegal decisions, creation of artificial obstacles in the activity of the HQCJ. According to the investigation, the group planned to seize the state power. This may seem surreal until one listens to the wiretap recordings published by the bureau (the transcript of the recordings is available here). Despite the fact that the HCJ in 2019 refused to suspend judges from office and even blamed National Anti-Corruption Bureau for starting the case.

These two examples show how the good intention to reduce political influence over judiciary helped judicial clans to usurp powers and take the whole system under control.

The good news is that despite the drawbacks, Ukraine invented unique solutions that already proved their efficiency in ensuring independence and accountability of the judiciary.

In 2018, international experts were involved in the selection of judges for the first time in Ukaine. The High Anti-Corruption Court was established from scratch, and there was a high demand of independence and integrity of its future judges. Considering the negative experience of previous judicial selections, it was decided to invite international experts and grant them so-called “veto right”. This solution proved its effectiveness as more than 80 percent of questionable candidates were disqualified. Now the reform of judicial governance aims at multiplying the experience of the High Anti-Courruption Court.

However, international experts are not a sustainable solution, so how can it be ensured that renewed institutions are not hijacked? Ukraine has the answer to this question as well.

Experts representing civil society organizations participate in the selection of leadership of anti-corruption institutions in Ukraine since 2015, and they become members of selecting and disciplinary panels within these bodies, as well as civil oversight councils helping to improve the transparency and accountability of institutions.

Moreover, starting from 2016, civil society is involved in the integrity screening of judges and judicial candidates through the Public Integrity Council. The Public Integrity Council (PIC) is a unique body consisting only of experts nominated and then appointed by civil society organisations. It participates in the qualification evaluation of judges and judicial candidates conducting integrity screening and adopting opinions of non-compliance with integrity criteria. Since 2016, the PIC has been involved in the selection of judges for the Supreme Court and the qualification evaluation of nearly 3,000 judges.

The experience of the PIC proves independent experts representing civil society organizations are capable of conducting integrity screening, dealing with tons of information and resisting high pressure. In 2022, prominent civil society expert, a former member of two compositions of the PIC and NABU civil oversight council Roman Maselko was appointed a member of the High Council of Justice after successfully passing the Ethics Council screening. This is his interviews cited at the beginning of the article.

Ukrainians are now paying for freedom and democracy with blood and sweat, and we came closer to the EU  than ever before. We fully realize we have to work a lot to transform our institutions and making them truly democratic. Although the European communinaty should also do some homework in preparing and adjusting to the innovative solutions Ukraine comes up with.

Ukrainian solutions are bold and effective and they are already working not only in Ukraine but also in Moldova which is implementing judicial governance reforms following Ukrainian approach. It is time for Europe to reconsider some old models and ideas. 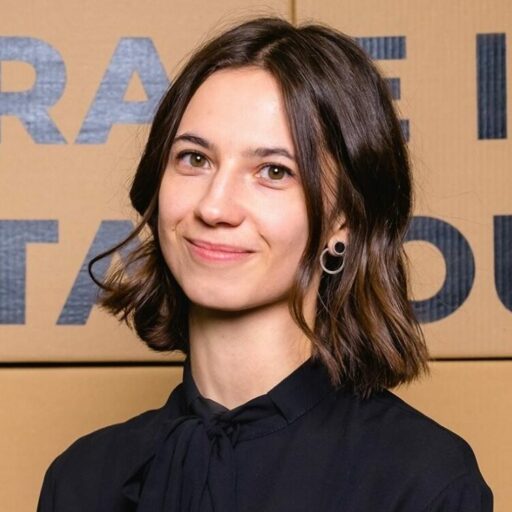 Halyna Chyzhyk Halyna Chyzhyk is a judicial reform expert at the Anticorruption Action Centre (Kyiv, Ukraine) and was a member of the Public Integrity Council (2016-2020).