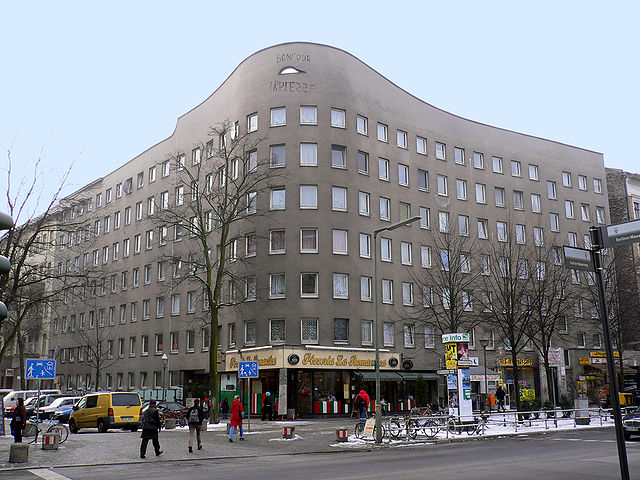 On Monday, 23 January, architect and architectural historian Esra Akcan  (2011-2012 Rechtskulturen Fellow at Humboldt University Law School) will talk in Recht im Kontext‘s Rechtskulturen Colloquium about Urban Renewal and Immigration in Berlin’s IBA (Internationale Bauausstellung / International Building Exhibition) 1984/87. Her paper deals with world cities at the wake of the twenty-first century and their ambivalent relation to legality. On the one hand, housing laws and regulations instituted by the city senates and municipalities play a significant role in determining the future of urban architecture, on the other hand, countless informal housing settlements around the world as well as the most exciting street art exist at a slippery slope between legality and illegality.

“This lecture will focus on Berlin-IBA 1984/87 that was justifiably one of the most important architectural events of the late 1970s and 80s, where major aesthetic and intellectual shifts of the period materialized as social housing in the historical city. IBA’s fresh formal ideals were complicated however by the under-discussed fact that it took place in the Turkish immigrant neighborhood of Berlin’s Kreuzberg. I will explore IBA 1984/87 as a micro cosmos of the history of urban housing, the postmodern and deconstructionist debates in architecture, and the relation between housing and immigration policies. Having to operate within the Senate’s immigration laws such as the ‘ban on entry and settlement’ and the ‘desegregation regulation’, IBA’s division into New and Old Building sections ended up generating two quite different responses to these housing policies from the perspective of the ‘foreign guest workers’. I suggest to analyze IBA with an art/architecture historical method that gives voice not only to the architects and policy makers, but also to immigrant inhabitants while setting a distance from sociology and ethnography inspired research in architecture that maintain either positivist convictions or geopolitical divides between the West and its ‘other’.“ (Esra Akcan)

Anna-Bettina Kaiser, junior professor of public law at Humboldt University und an expert on building law and regulation, has agreed to serve as commentator.

„Hat sich noch nie jemand an den Kopf gefasst und gefragt, warum man Studenten mit hochspeziellen Gebieten wie Baurecht ärgert?“ („Did nobody ever wonder why law students are tortured with highly specialized fields such as building law?)“, student litigator Arwin Fathi recently asked in a comment on this blog. Well, we are convinced that building law is, beyond its practical relevance, an intellectually challenging field, and that it should be of great interest not only to law students, but to anyone interested in architecture and aesthetics, law and society, ethics and politics. Esra Akcan and Anna-Bettina Kaiser might tell us why that is the case. We look forward to their presentations and to a lively debate.

Other posts about this region:
Deutschland 3 comments Join the discussion
pixel_not_set
Go to Top