The Eurozone Crisis: Some reflections on economic sustainability and the issue of legitimacy

The Eurozone Crisis: A Constitutional Analysis by Kaarlo and Klaus Tuori is a welcome addition to the vast literature on the recent financial turmoil, the Eurozone crisis and the policy, legal and institutional reform of the European Union in their aftermath.

The book consists of three parts. Part one introduces the reader to the main themes of the book, namely, the macroeconomic and the microeconomic layers of the European economic constitution, the causes of the recent financial crisis and the European response. Against this backdrop, part two focuses on the issue of constitutional mutation, exploring, in particular, the constitutionality of the European measures that were taken in response to the crisis, the realignment of the principles of the macro-economic constitution and the wider implications on democracy and social rights. Finally, part three goes through key initiatives that are currently on the table offering thus a glimpse on the future of the Eurozone and the challenges ahead.

One of the chief virtues of the book is that it lays the basis for a broader debate on the present and future of the Eurozone without becoming entangled in the details. Further, the authors attempt to shed light on the interplay between economic policy and the evolution of the European economic constitution in a manner that is dispassionate, well balanced and accessible even to those unfamiliar with these subjects. I found the discussion of the principles of the European economic constitution and the comparative analysis of the micro- and the macro-economic facets of it to be a very insightful introduction into the more rigorous analysis of themes such as the constitutionality of the EU response to the financial crisis, which is considered in a subsequent chapter. I also learnt a lot from the authors’ criticism of current European initiatives that aim to strengthen legitimacy and democratic accountability in Europe in general and in the Eurozone area in particular.

Another admirable quality of the book is that it covers an extensive ground within a limited space. There are of course certain omissions to note. For example, in one of its relatively recent publications, the International Monetary Fund has been critical about the handling of the Greek sovereign debt crisis by Eurozone member-States. The IMF publication is briefly mentioned in the book but, in my view, the IMF points of criticism deserve full consideration in their own right especially those relating to (a) moral hazard considerations that informed the decision of Eurozone members to rule out from the start debt restructuring; (b) the case for having in place ex ante programme agreements and burden sharing (in place of promises of conditional assistance) and (c) the failure, in the opinion of the IMF, of the EU officials to promote growth-enhancing structural reforms instead of just ‘sticking to EU norms’. Taking into account that these lines of criticism underscore aspects of the European economic constitution that may require revision (e.g., the role of national Parliaments in approving rescue packages, whether economic growth in troubled countries can be achieved through the imposition of austerity measures during times of major financial distress etc.), they bear the potential of serving as constructive guidance on what we should be doing in order to improve the effectiveness of EMU institutions in delivering tangible outcomes, especially that of sustainable economic growth. It seems to me that institutional effectiveness (alongside robust accountability mechanisms to uphold democratic governance) will be a catalyst to strengthen the legitimacy of the European economic constitution for the years to come, granted that the lack of it undermines credibility and ultimately erodes public trust.

Similarly, the book offers an overview of the main definitions of economic/financial stability without exploring the interplay between stability and resilience. This is not a trivial matter. Financial resilience has become an essential component of macro-prudential regulation post-crisis; however, its practical implications are difficult to pin down with any precision. At the danger of oversimplifying, the mainstream view tells us that resilience is the capacity of the economy and/or the financial system to resist shocks and that it is to be measured in terms of how quickly the system bounces back to normal. One difficulty with this account of resilience is that the perceived ‘normality’ may not be a normal or indeed a desirable state of being after all. This will be the case, if, for example, by ‘past normality’ we have in mind a market configuration like the one that was at play in the years leading to the crisis of 2007, namely, one that is conducive to unsustainable economic growth. A further difficulty is that a speedy response may itself not be a realistic or sustainable strategy in the first place. The Eurozone response to the Greek sovereign debt crisis is a case in point in this regard. It highlights the fact that under certain circumstances, it may be deemed optimal just to delay things although not necessarily for the direct benefit of the country in default. In this particular case, the Stand-By Agreement supported program served exactly that purpose. Although an upfront and immediate restructuring of the Greek debt would in all probability have been beneficial for Greece, the SBA-supported program was preferred as a holding operation, which allowed Eurozone partners to buy out valuable time in order to take measures that were necessary to protect other vulnerable members of the Eurozone. Therefore, an alternative and arguably preferable way of thinking about financial resilience is by focusing on the perpetual transition of the economic/financial system and the need to regulate adaptation at micro (firm-specific), meso (sector-specific) and macro (system-wide) levels. A European economic constitution that embeds this alternative conception of resilience is arguably more attuned to the Eurozone desideratum of sustainable economic growth, because it calls for policies that inter alia facilitate change and foster adaptive capabilities as, for example, through the building of buffers to address any spillover effects of economic policies to the society, especially at times of economic crisis.

At times the book leaves the more sophisticated reader hungry for more. For example, quite rightly it is pointed out in the book that, in principle, it is economically and morally suspicious to demand the continuous membership in the EMU (or to sanction exit) of Member-States that bear more burdens than benefits out of the common currency. Yet, a short-term burden may turn into a long-term benefit for a Eurozone member-State and vice versa. Accordingly, one needs to think of the timeframe within which to assess the impact of EMU on burden sharing among Eurozone members. Further, one has to look at the grounds that drive national discontent, as these may be short-sighted and the by-product of political capture serving the interests of the few at the expense of the many. Last but not least, the EMU is relatively easy to ‘undo’ but very difficult to ‘redo’. One needs to question whether an alternative scenario (arguably one which would be more consistent with the high importance that we attach to national sovereignty and democratic accountability) is likely to offer a more viable and sustainable solution not only for the country in question but also for the European region as a whole. It seems to me that the last point carries special weight, because regional peace and prosperity were the cornerstones of the creation of the European Communities in the aftermath of the Second World War.

To conclude, The Eurozone Crisis: A Constitutional Analysis is an exemplary case of scholarship that combines insights from the disciplines of law and economics. It invites us to take a critical stance on the values that underpin our societies and on what needs to be done in order to ensure that the European economic constitution is attuned to our intuitions about legitimacy and democratic accountability. The insightful and comprehensive examination of the relevant topics makes the book an essential reading. 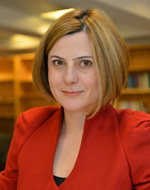 Andromachi Georgosouli Dr Andromachi Georgosouli is a senior lecturer at the Centre for Commercial Law Studies (CCLS), Queen Mary University of London. Her research focuses on theories of regulation and how they reshape the landscape of financial regulation post-crisis.
Other posts about this region:
"The Eurozone Crisis" - A Book Debate, “The Eurozone Crisis” – A Book Debate, English Articles, Focus, Schwerpunkte No Comments Join the discussion
Go to Top