Why Poland and not Hungary?

According to Frans Timmermans, speaking on 17 September 2017, “the situation in Hungary is not comparable to the situation in Poland” implying that Poland is far worse off than Hungary in the rule of law department. But is that true?

Timmermans’ diagnosis that Poland is worse than Hungary is surprising considering the easily available and multiple studies documenting many years of systematic attacks on the rule of law in Hungary (see for instance this 2016 report from the European Federation for Human Rights and this 2017 report from the International IDEA in which Hungary is presented as the archetypal backsliding story).

Timmerman’s argument was also offered a few months after the European Parliament itself held in a resolution that the “current situation in Hungary represents a clear risk of a serious breach of the values referred to in Article 2 of the TEU [which] warrants the launch of the Article 7(1) TEU procedure.”

Hungary’s descent into autocracy under Orbán has been so steep that it is now regularly described as a semi-authoritarian regime and has now achieved the lowest ranking in the Central European region in Freedom House’s latest Nations in Transit report (Poland achieved its lowest point in more than a decade in this same survey but it still ranked higher than Hungary): 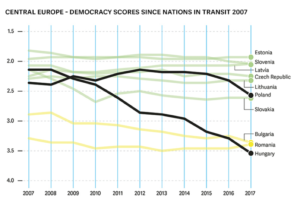 As noted by Dr Christopher Adam, the founding editor of the Hungarian Free Press, “while Hungary may still be considered “free” by Freedom House standards, its aggregate score indicates that it is now the “least free” member state of the EU”. Hungary now scores lower than either Romania and Bulgaria, two Member States that entered the EU under a Cooperation and Verification Mechanism that requires ongoing monitoring of the independence of their judiciaries. But Hungary at present is not subject to monitoring.  Double standards work in Hungary’s favour.

Despite overwhelming evidence of Hungary’s steep and sustained descent into autocracy and evidence that Poland is quickly following Hungary’s example (if only because the Polish ruling party is implementing an “on-steroids” version of Orbán’s constitutional capture blueprint), the European Commission has so far refused to activate either its Rule of Law Framework or Article 7(1) TEU vis-à-vis Hungary, while it quickly responded to Poland’s decline by invoking the Rule of Law Framework in January 2016, only a few short months after Poland’s PiS government came to power and started wreaking havoc with constitutionalism. Multiple reasons to justify inaction in the Hungarian case have been raised over the years and it would be difficult to cite them all here. The two key justifications, as put forward by Věra Jourová before the European Parliament in December 2015, are that (i) “concerns about the situation in Hungary” can be effectively “addressed by infringement procedures” and (ii) national “rule of law safeguards” would still be “capable of effectively addressing” any systemic threats to the rule of law.

These two justifications however can hardly survive a brief Google search.

First, there is no evidence that infringement proceedings have so far prevented to any meaningful extent Hungary’s transformation into an autocratic mafia state. In fact, Věra Jourová herself subsequently argued in April 2017, at a time where demonstrations were taking place in protest against Orbán’s attempts to shut down the Central European University, that imposing “administrative steps or infringements or other measures” against the Hungarian government would be unlikely to result in any real change. That was a position in total contradiction with the one she previously defended before the Parliament in December 2015 when she expressed faith in infringement procedures as the European Commission has so far brought them.

By contrast, and secondly, there is a substantial body of evidence that the Hungarian judiciary’s independence and impartiality have been systematically undermined via forced retirements and other measures in Hungary (see for instance the report issued by the International Bar Association’s Human Rights Institute  in 2015; see also the Grand Chamber judgment of the ECtHR in the 2016 case of Baka v Hungary). As noted in a previous paper of ours, it is “ludicrous to believe that the ‘Hungarian justice system’ could remedy to any serious extent the threats and breaches of EU values identified in the Parliament’s resolution because the independence and impartiality of the Hungarian judiciary had already been fatally undermined following repeated and ultimately successful attempts by Orbán’s ruling party to seize control over the appointment of judges, determine according to political criteria the viability of individual judge’s careers and seize the process through which cases were assigned to specific judges”.

So, while Vice-President Timmermans is right to highlight and be worried about the fact that “today in Poland the constitutionality of legislation can no longer be guaranteed”, the same can be said of the situation in Hungary. One has just to look at how the Hungarian Constitutional Court is doing its best not to decide the constitutionality of the so-called Lex CEU and Lex NGO (for further analysis, see the posts on this blog of Professors Halmai and Uitz as well as this study by Professor Bárd). The Court has been reduced to an echo chamber of the government’s views.

The Commission’s official justifications for its inaction in the Hungarian case therefore lack credibility.

From a legal point of view, two other reasons – both of which the Commission is reluctant to admit – appear to explain much of its current denial regarding the situation in Hungary.

First, most of the damage to Hungary’s democratic fabric and national “rule of law safeguards” is already done and fully entrenched, so undoing the damage is a difficult task. In Poland, the capture of independent institutions is still underway and might be more easily halted before the capture is complete.

Secondly, the constitutional coup in Hungary was carried out through the rapid enactment in 2011 of a new constitution that was specifically designed to speed Hungary’s transformation into an autocratic one-party state. Hungary’s ruling party, having won a constitutional majority in the 2010 election, was able to rewrite its national constitution specifically to permit capture of the Constitutional Court and to enable the speedy destruction or capture of all possible counter-powers through perfectly legal means. By contrast, in the absence of the supermajority that would have been necessary to revise the Polish Constitution, the ruling party there has had to violate the Polish Constitution in order to achieve its autocratic goals. The Polish government has violated its own constitution repeatedly and blatantly (for a recent and extremely comprehensive demonstration see this study by Professor Sadurski), leaving the Commission no choice but to act against its natural inclination to wait out major problems. The Commission evidently seems more comfortable pressing a Member State to follow its own laws rather than pressing a Member State to follow the principles of the EU.

In our view, these two arguments do not excuse the Commission’s failure to do its duty. In 2013, the Tavares report of the European Parliament called on the Commission and the Council to act decisively while Hungary was still in the middle of its constitutional capture.  While the Commission occasionally scolded Hungary at that time, the Council did precisely nothing and the Hungarian juggernaut proceeded without pause. European institutions should not repeat the same mistake now when faced with repeated attacks against the EU while Orbán’s relatives benefit from EU-funded contracts and with new legislation targeting the most internationally well-regarded university in Hungary as well as civil society groups promoting human rights and transparency. If setting a bad example within the EU is not enough, Orbán’s policies have since emboldened if not inspired autocratic regimes worldwide.

It is therefore reasonable to remain unconvinced by the Commission’s legal arguments that infringement proceedings and national rule of law safeguards are effective or its political ones that you can have a dialogue with Hungary when it comes to justifying failing to trigger even the relatively mild pre-Article 7 procedure. When compared to the situation in Poland, there is no objective factor which appears to justify inaction on Hungary while the Commission is active on Poland. At the very least, the rule of law framework should have been activated to determine whether the situation in Hungary was as bad as that in Poland.

One is forced to conclude that we have here an obvious case of double standards. As argued by Professors Kelemen and Müller, these double standards can only be explained by the protection afforded to Orbán by the European’s People Party whose leaders have repeatedly and shamelessly embraced and protected Orbán over the years.

Laurent Pech Laurent Pech is Jean Monnet Professor of EU Public Law and Head of the Law & Politics Department at Middlesex University London. He is currently a member of the H2020 funded research project on ‘Reconciling Europe with its Citizens through Democracy and the Rule of Law” (RECONNECT). ORCiD >>
3 comments Join the discussion