My highlight of the week was undoubtedly the „State Opening of Parliament“ in Westminster. If you missed it, do watch it! That is, even in this year’s stripped-down version (obviously there was no time for the horse choreography, so the cavalry and the gilded Irish State Coach had to remain in the stable), constitutional theater at its finest. 600 years of constitutional history are wrapped into this ceremony like raisins in a strudel. Absolutely wonderful!

The British, as is well known, are not citizens of a republic, but subjects of a crown. There is no such thing as republican equality: most are Commons, some are Lords. When the Queen arrives in Parliament, she is received by two gentlemen of fairly common appearance but in decidedly uncommon garb, one of whom goes by the name of Edward Fitzalan Howard, 18th Duke of Norfolk, and holds the hereditary office of Earl Marshal of England; the other is officially called David Cholmondeley, 7th Marquess of Cholmondeley, and in that capacity pursues the duties, whatever those are, of the Lord Great Chamberlain. After greeting these two, the Queen is led to the chamber of her Lords, where she takes seat as Queen in Parliament in front of a roomful of Peers of England, Scotland, and Ireland, all clad in pretty scarlet capes with ermine collars, and a number of other dignitaries. Once she is seated, she orders a person titled the Gentleman Usher of the Black Rod to walk over to the chamber of the Commons and summon these unruly fellows before their queen. As the messenger arrives at that place which is situated a corridor or two away he first has the door slammed into his face – a mildly shocking moment in what otherwise is an outstandingly courteous and solemn affair – whereupon he lifts his Black Rod and knocks three times at the door. He is instantly admitted, of course, and enters the chamber of the Commons to deliver his message while the recipients, albeit rather civilly, hoot and jeer and make funny remarks, most of all a crusty old Labour MP named Dennis Skinner who invariably shouts something endearingly undeferential in his Derbyshire accent at this point of the procedure. A Parliament official called Serjeant at Arms of the Commons then shoulders a humungous utensil of unclear use called a Ceremonial Mace, and the whole crowd noisily sets off to visit the Lords in their chamber and listen to the Queen’s speech. 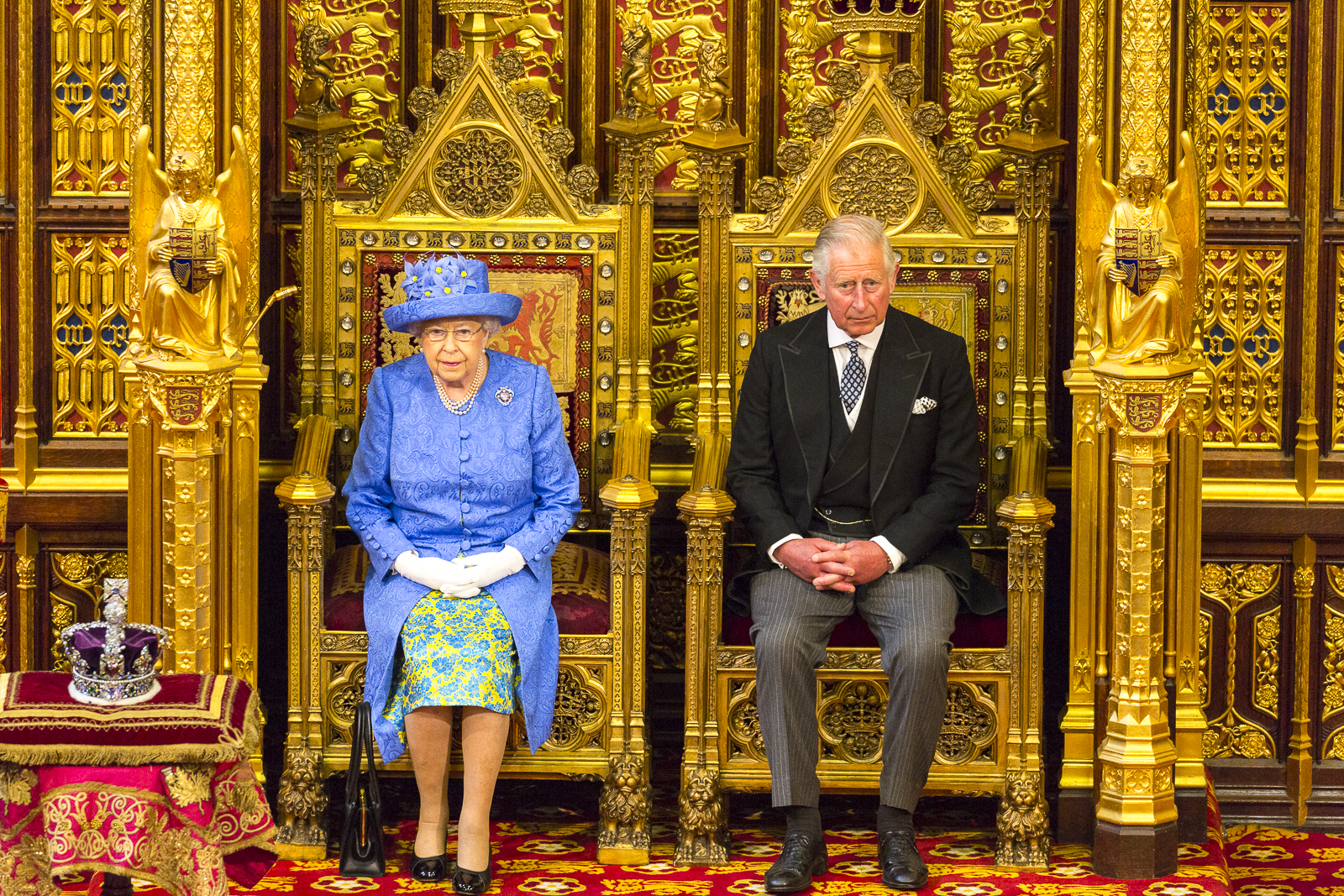 One can enjoy this spectacle for its nostalgic splendor, as a sort of suspense-less period movie for anglophiles full of pomp and gold and fanfare. What I find so great about it is something else, though: the wonderful constitutional mise-en-scene that it is, and in that incomparably British way, too! Everything is ever so slightly ironic. Nothing really is what it pretends to represent. There are rather few heads of noble families among the scarlet-clad Lords, most of whom, for all their merits, are distinctly bourgeois people, retired politicians and such. There is the Imperial State Crown, carried by the Lord Great Chamberlain before the queen on a purple cushion, but no Empire to match it for more than half a century. The Queen, the centre of the whole ceremony, has actually very little to do – basically reading aloud a text written by someone else and not tripping over her feet on her way to the Lords‘ chamber, is all. Nobody, of course, is in fear of that charming old lady, nor of the Black Rod wielded by her Lords‘ Gentleman Usher. All that boisterous independent-mindedness of the Commons has no counterpart whatsoever. Their rowdy ways give by no means offence to anyone but are just as part of the ritual as the fabulous Cap of Maintenance, one of the three regalia which is carried by the alleged Lord Keeper of the Privy Seal, an office that requires its holder, a Tory politician named Baroness Natalie Evans of Bowes Park, to hold that fancy headgear aloft on a pole during the entire ceremony. Even old Dennis Skinner, the socialist coal miner from Derbyshire, has long ago ceased to be a scandal and turned into just one more raisin in the fragrant folds of the great golden British state-strudel to the delight of all who taste it. 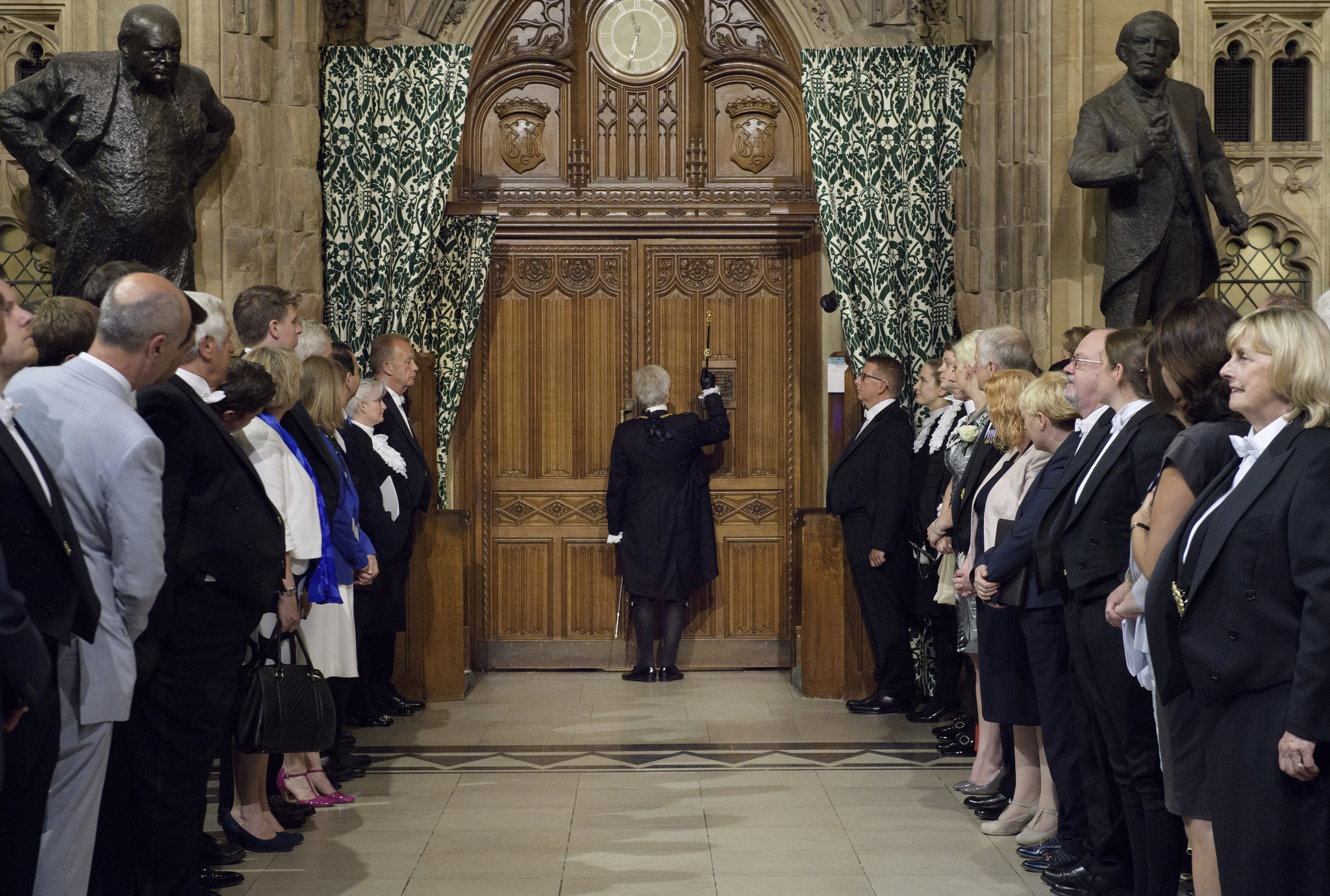 Everything in that ritual is serious, but not actually quite serious in a sense that really means what it means. Participants and spectators try to keep on a straight face for most parts, but before the TV sets and on Twitter the giggling is all the more uncontrolled, I suppose. Which is a great thing. With this practice of not-quite-seriousness the British have during the last 400 years successfully avoided most of the revolutionary bloodshed that the kingdoms and empires of the continent had to endure. All possible sources of unrest have just been comfortably wrapped into the strudel, the latest example being UKIP which – you have to give it to Theresa May – has been annihilated in the elections as the Tories have snatched all their issues away from them to stuff the strudel with. In terms of constitutional culture that is certainly an outstanding achievement.

Laughing at French state ceremonies? Inconceivable. At German ones? Neither, although for other reasons. British state ceremonies, on the other hand, appear almost designed to be witnessed tongue-in-cheek. Prince Charles is perfectly in line with the ritual as he exchanges a few friendly words with his old chap Norfolk at the gate of the Parliament. So is the Usher of the Black Rod as he winks to a female colleague on his way to the Commons.

At the moment there seems to be very little reason for serenity in British politics, though. It is still not settled whether Theresa May’s legislative program proclaimed by the Queen’s mouth, and thereby her government, will have a majority in Parliament next week. For that she needs the votes of the most unfunny persons in the whole of British politics, namely the Northern Irish Protestants. And with Brexit at the core of her program she will have to deal with people sitting in Brussels, Paris and Berlin and rather disinclined to let any British wrap them into any sort of ironic ceremonial strudel. And because the whole situation is so grim, and by Theresa May’s own fault, the old chaps of her own party already prepare for a decidedly unhumorous step, which is to take her down.

Perhaps the British wouldn’t even be in this situation if it weren’t for their famous humour. With respect to Europe, that humour has always been mostly about finding non-English people impossible in a faintly amusing way: these Frenchmen with their cheese and these unspeakable Germans, some of them decent enough fellows, for sure, but on the whole not to be taken seriously. For many years, the British press reporting on the EU had been almost exclusively about making fun of all sorts of regulations invented or not, of Herman van Rompuy’s jug ears, of the grotesque idea that some clowns in Luxembourg or Strasbourg or whatnot should tell the British what the law is. One who brought this kind of humour to perfection during his time as the Brussels correspondent of the Telegraph was the Right Honorable Alexander Boris de Pfeffel Johnson, the Eton-and-Oxford-educated and awfully funny Foreign Secretary and possible successor of Theresa May.

British humour is a distinctly aristocratic affair. It is about putting a distance between oneself and one’s situation. To be able to do that with grace and ease requires you to be just what you are, as opposed to what you do or can do or have done. This distance makes you sexy and attractive. Everyone wants to be like you, so self-confident, so sure about one’s place in the world. You get copied a lot, your ways of speaking, your way to dress, to do your hair, to smoke, to do sport, to do journalism, to be funny. All those foreigners striving to appear British, isn’t that amusing? Only the French insist so humourlessly on being French that it is almost funny in its own way.

The more the EU has become a republican project in recent decades, the worse British humour and the EU got along with each other. In the EU Council, the heads of state and government are equal. No commons, no lords, and certainly no majesty. One must actually expect a Slovakian to find an Englishman just as amusing as vice versa. Suddenly, David Cameron and Theresa May, when no one at the summit wanted to speak to them any more, didn’t look self-assured and aristocratic but actually rather sad. It takes a while to learn how to deal with that sort of situation. This week the Brexit negotiations have begun. May both sides not run out of humour.

One of most prominent and difficult issues in the Brexit negotiations will be the „divorce bill“ the EU will ask the UK to pay. STEFFEN HINDELANG expects the list of items on that bill to be quite extensive.

Among the topics discussed at the EU summit this week was the still unresolved crisis of the Common European Asylum System. The EU Commission has made proposals on how to overcome this crisis. DANIEL THYM calls for more public attention for this fundamental process: „Current debates could result in a pan-European understanding of asylum law, a kind of constitutional identity for the GEAS, even if gridlock and failure remain conceptually possible.“

In France, President Macron and his brand new party La République en Marche won an absolute parliamentary majority last Sunday. TIM WIHL investigates to which extent the power of Macron could be deemed dangerous and reports on a new decision by the Constitutional Council about the French anti-terror laws.

In Poland, the Constitutional Court, after having been successfully taken over by the government, has proven its use for its new masters as it complied with the wish of the government to strike down parts of the law on the National Council of Justice as unconstitutional, which gives the government the opportunity to replace these norms in order to bring the Council and thereby the judiciary as a whole under its thumb. MARCIN MATCZAK explains how this works.

In Italy, the trauma of its unconstitutional electoral system remains unrepaired so far as there is still no majority for copying the German personalized proportional suffrage. GIACOMO DELLEDONNE shows what this has to do with the provisions of the Italian Constitution.

In Germany, the European Court of Justice has examined the power of the federal police to control unsuspicious persons and declared them too vaguely defined. Why this at first sight appears like good news but on second glance rather weak and a missed opportunity to step in against racial profiling, is explained by ALEXANDER TISCHBIREK and TIM WIHL.

Glossator FABIAN STEINHAUER has been provoked by a comment asking whether „Mr. Steinbeis has ordered these glosses“ to comment in his weekly column on ordering, origin and provocation.

MANUEL MÜLLER interviews Christoph Möllers about how the EU can resolve its crisis.

TAMMY HERVEY and JO SHAW take the anniversary of the Brexit referendum as a reason to criticize the idea of ​referenda reflecting the constitutionally binding will of the people.

JAVIER COUSO examines the opportunities for liberal constitutionalism in Equador after the departure of President Rafael Correa.

In the next week, we will be picking up a major news item from this week for scrutiny: the German legislation on Trojan software used by the government. Another topic is not so obvious: the „one country, two systems“ agreement about Hong Kong which turns 20 years old on July 1st, and how well or badly this deal has turned out to work.

Take care, and all the best,