Careers and Continuities: The German Federal Ministry of Justice and its Pasts 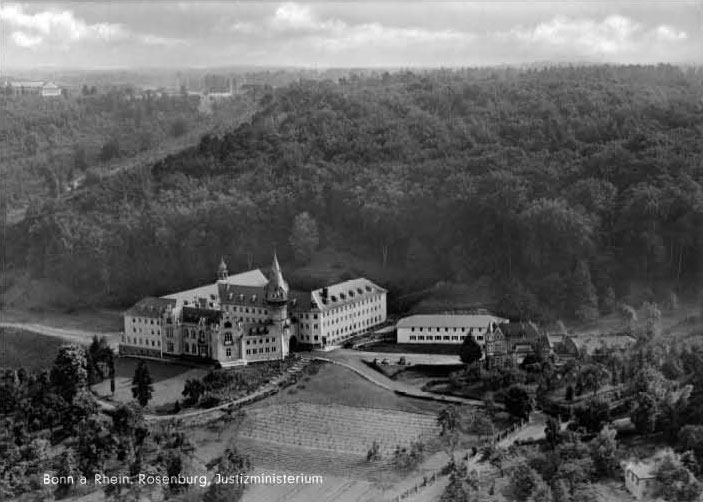 „Alas, what is it that is to be investigated and researched here?” That question was present in all presentations and discussions of a long conference day at the Berliner Kammergericht on 26 April 2012, marking the establishment of the  „Unabhängige Wissenschaftliche Kommission beim Bundesministerium der Justiz zur Aufarbeitung der NS-Vergangenheit“ („Independent Scientific Commission at the Federal Ministry of Justice for the Investigation of the National-Socialist Past“). Is it not well known how quickly, in the early years of the Federal Republic,  the old elites found their way back into their previous leading positions? Are we not more than familiar with the facts stressed in Berlin once again by Freiburg historian Ulrich Herbert: that the German judicial system was dominated, in the first three postwar decades, by former Nazis? And is it not already common wisdom for anyone interest in contemporary history, that „remarkably successful aggressive self-assertion of the lawyers“?

Research in the archives of the Federal Ministry of Justice (BMJ) could now contribute to a discovery and disclosure of questions still lurking under the surface of the current state of scholarship. Michael Stolleis recently characterized these questions in the just published concluding volume of his seminal four-volume treatise on the history of German Public Law, „Geschichte des öffentlichen Rechts in Deutschland“ (1945 bis 1990), as the „more relevant questions“: „How about the German society’s sensibility to recognize its own cultural past? How was a new beginning possible, with so many leading figures „burdened“ by their own past?“

These questions are directly linked to the question of the interrelations between personal and substantial continuities – a question raised and adressed to the scholars by the Federal Minister of Justice  in her introductory statement, before she sat down and listened attentively for an entire conference day. A question leading to that key question voiced by Ulrich Herbert: „How was it possible to establish with such a judiciary, such a judicial system a democratic and – from the late 1960s onwards – also liberal legal system?“

The Commission’s final report is scheduled for 2015. Until then, the researchers shall investigate how the Federal Ministry dealt in the 1950s and 1960s with its national-socialist past. How about continuities, personal continuities as well as substantial ones? How many „burdened“ („belastete”) employees served with the Federal Ministry of Justice? What impact had the „burden“ of their past on legislation, and on the judiciary? What position took the Ministry on the criminal prosecution of Nazi crimes? On the Nuremberg trials? On the establishment of the „Central Office of the State Justice Administrations for the Investigation of National Socialist Crimes“ in Ludwigsburg?

The working group is small, its funding still needs to be secured: In january, Federal Minister of Justice Sabine Leutheusser-Schnarrenberger named  Manfred Görtemaker, professor of history at Potsdam University, and Christoph Safferling, professor of criminal law and international law at the Philipps-University of Marburg, Germany, and deputy Director of the International Research and Documentation Center for War Crimes Trials, also in Marburg, as members of the research commission. Both scholars have full access to the Ministry’s historical files which shall later be transferred to the German Federal Archives. The Berlin symposion now convened by Görtemaker and Safferling shall be instrumental to sharpen the Commission’s research questions and to develop its research program for the coming years.

In Berlin, the current state of scholarship was outlined by a group of eminent speakers. Their presentations made it very clear that the work of the „Independent Commission“ holds the promise of an experiment in transdisciplinary research on law. It could provide an impetus for public discussion. And it holds the promise to generate new interest in the increasingly weakened theoretical fundamentals of the law („juristische Grundlagenfächer“), thereby providing an impetus for a revival within, inter alia, the fields of legal history, legal theory, legal sociology and historical research on law.

Bernd Rüthers, professor emeritus of civil law and legal theory at the University of Konstanz, highlighted in his presentation legislative continuities linking the „Third Reich“ with the Federal Republic. Rüthers emphasized the relevance of historical reflexion in legal methodology and jurisprudence: „Following a short period in a holding pattern, functional elites kept their positions even after 1945 – and employed the very instruments and methods they had been using after 1933. Silence reigned – in the courts as well as in the faculties of law. In Festschriften and obituaries, the old networks directed the legal profession’s self-presentation.” Casting a cold and critical eye on legal history would contribute to a more sensitive and nuanced awareness for contemporary risks of a transition from a legislative to a court-centred state, the legal theorist said. Rüthers concluded on a melancholic note and pointed to the fact that  legal history and legal philosophy, the disciplines that could help to identify and critically analyse such transitions, were taken off the compulsory curricula of German legal education in many law faculties in recent years.

Joachim Rückert, professor emeritus of private law, legal history and legal philosophy at Goethe University Frankfurt, drew from his initial explorations in the BMJ’s personnel files and presented „Bemerkungen über Mitläufer, Weiterläufer und andere Läufer im Bundesministerium der Justiz nach 1949” („Remarks on Hangers-On, Endurance Runners, and Other Runners in the Federal Ministry of Justice after 1945“). Horst Dreier, professor of public law and legal philosophy at the University of Würzburg, examined the Ministry’s impact on constitutional developments in the Federal Republic’s early years. Analyzing the BMJ’s personnel files, Rückert found that only in 1966 the percentage of „burdened“ employees serving with the BMJ had reached its peak: in 1966, all four directors of the ministry’s divisions (Abteilungsleiter) and 50 percent of all heads of its sub-divisions (Referatsleiter) were former members of the NSDAP or its sub-organizations. Yet, such numbers do not tell much about the precise kind of historical „burdens“ and responsibilities, about political and ideological continuities, as Rückert admitted. He agreed with the historian Raphael Gross who had called for greater attention for continuities in the area of morality and moral judgement.

In the discussion, Gross‘ perspective was vehemently opposed by Ulrich Herbert. Herbert urged his fellow scholars to focus more on acts and deeds, on facts instead of morality. Thereby also the pure fact of party membership would be less relevant to an assessment of individual careers, Herbert argued. Instead, a focus on acts and deeds would facilitate a less complex debate. However, if one is to analyze the widespread auto-suggestion earlier described by Ulrich Herbert, if one is indeed to examine the perpetrators‘ own firm belief to have always „only served the law“ – then it definitely needs a closer look on the entire picture, with all its complexities.

The original German version of this post was first published in Frankfurter Allgemeine Zeitung of 2 May 2012,  p. N4 (Geisteswissenschaften). Translation into English (including all quotations) by the author.

Our photograph depicts the „Rosenburg“ at Bonn, seat of the Bundesministerium der Justiz (Federal Ministry of Justice) from 1950 to 1973.

Other posts about this region:
Deutschland 1 comment Join the discussion
Go to Top