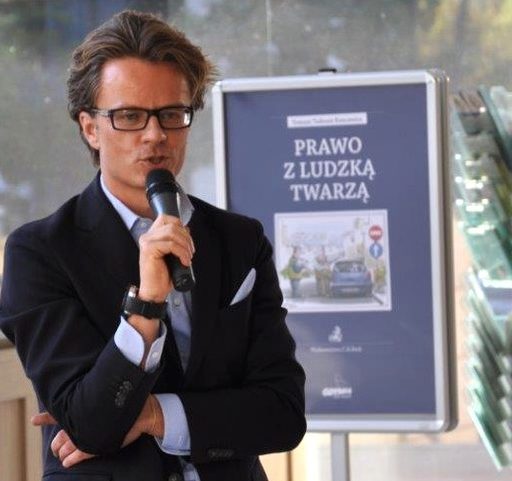 Tomasz Tadeusz Koncewicz is a Professor of Law and Director of the Department of European and Comparative Law at the University of Gdańsk. He is currently Fernand Braudel Senior Fellow at the EUI Florence and Principal Investigator at the research project "Reconciling Europe with its citizens through Democracy and the Rule of Law" (RECONNECT).

"History doesn’t repeat itself but it often rhymes."

Here we go again. The reports are resurfacing that the Commission is ready to back away from the Article 7 procedure that was initiated against Poland last December. Rumour has it that such withdrawal is driven by bitter infighting within the Commission („pro-Art. 7 TUE Timmermans v vacillating Juncker”) and fears that Art. 7 TEU could result in a series of potentially divisive votes by EU countries and ultimately fail to force Poland to undo its judicial changes. Further talks with Poland are advocated instead …

Should we be surprised? For anybody who vaguely follows the Commission’s vanishing act, the answer must be a resounding „no”. Instead, the analysis that follows offers a journey back in time and argues that the past teaches us some important lessons and … rhymes.

Zwartveld: Once Upon a Time in the Community Based on the Rule of Law …

Case C – 2/88 IMM, Zwartveld* remains to date one of the most fascinating (and forgotten!) procedural decisions the Court of Justice (the Court) has ever made. At first, the case looks look like a very unlikely candidate for the rule of law building block. Yet, do not let the (rather) peculiar facts fool you. The case was a referral from a Dutch court hearing a criminal case involving financial embezzlements in the common market in fisheries. The national judge wished to inspect documents drawn by officers of the Commission during investigations carried out and then call them as witnesses. His application was refused by the Commission on the grounds that the documents requested concerned aspects of the internal organization of the Commission, and as such could not be sent for inspection by a judge. Having received this decision, the judge sent the case to the Court. The Commission argued that the case was inadmissible since the Treaty regulates exhaustively the jurisdiction of the Court and access to it by national courts. The latter always take the form of Article 267 TFEU referrals for preliminary rulings. The Commission argued that  the request of the national judge was not within the confines article 267 of the TFEU, since it neither concerned the interpretation nor the validity of European Union law, and as such was clearly inadmissible. The Court disagreed.

While it confirmed the lack of a specific head of jurisdiction, it did not see this sole finding as sufficient for the request to be inadmissible. The basis for the Court’s jurisdiction stemmed from the special character of the European Union law. The Court started by referring to two constitutional judgments Costa v Enel (Case 6/64) and Les Verts (294/83) The Treaty created its own legal system that became an integral part of domestic legal systems (Costa), and the Union is based on the rule of law (Les Verts). Rule of law calls for a wide interpretation of art. 4(3) TEU (at the time it was art. 10 Treaty on the European Economic Community) that reads: „Pursuant to the principle of sincere cooperation, the Union and the Member States shall, in full mutual respect, assist each other in carrying out tasks which flow from the Treaties. The Member States shall take any appropriate measure, general or particular, to ensure fulfilment of the obligations arising out of the Treaties or resulting from the acts of the institutions of the Union. The Member States shall facilitate the achievement of the Union’s tasks and refrain from any measure which could jeopardize the attainment of the Union’s objectives”. Applying these findings to the case at hand, the Court underscored that when a national court investigates alleged infringements of EU law and requests assistance, the principle of loyal cooperation requires every institution to do its best to assist the national court in its task.

As for the Court’s jurisdiction to entertain the case, the Court singled out Art. 220 of the Treaty on the EEC (today Art. 19 TEU: „The Court of Justice of the European Union shall include the Court of Justice, the General Court and specialised courts. It shall ensure that in the interpretation and application of the Treaties the law is observed”). This provision obliges the Court to make sure that the Commission complies with its duty of loyal cooperation. In Zwartveld, Art. 19 TEU has been linked to Article 4(3) TEU, so that the former would enable judicial control of whether the latter is respected. Having set out the jurisdictional context, we should now move to the procedural aspect of Zwartveld. Ensuring observance of the law as required by Art. 19 TEU means that the Court supervises the respect of Art. 4(3) “by means of a legal procedure appropriate to the objective pursued by the national authority” (fr. “[…] par une voie de droit adaptée à l’objectif que cette autorité poursuit” (emphasis added). The introduction of the term “legal procedure” by the Court is a novelty of Zwartveld. It is the procedure and jurisdiction that enables the Court to make sure that the duty of loyal cooperation incumbent on the institutions is observed.

Fast-forwarding Zwartveld to 2018:  Of Times When the Opportunistic Politics Reign Supreme

Back to 2018. There are important constitutional takeaways from this case. Let me just mention four.

First, unless we want to sit idly, we must accept that times of constitutional debacles call for creative interpretation. The Commission does not function in a legal vacuum. It is bound by the duty of loyal cooperation in the pursuance of the objectives of the Treaties. This duty is justiciable and must be enforced before the Court. When there is duty, there must be legal remedy. Ubi officium, ibi remedium.

Secondly, could the Commission un-trigger Art. 7(1) TEU in the same way that it can withdraw a legislative proposal? It seems that Art. 7(1) TEU cannot be compared to the ordinary legislative procedure, yet the rumours paint a picture of a hesitant and wavering Commission and point toward an interpretation according to which the Commission thinks it has the power to withdraw Art 7(1) TEU as long as the Council has not adopted any formal action. What then? Ubi officium, ibi remedium? Treaty action for failure to act comes to mind almost instantaneously. The argument here would be that that the Commission failed to carry through the Art. 7 TEU procedure that it itself implemented in the first place. If the Commission lays out the case against Poland for Art. 7(1) TEU and then withdraws the proposal in a “compromise” with the Polish government that doesn’t address the serious issues (for example, that a lot of judges were fired), wouldn’t that provide the textbook case of inaction? In the usual case, it’s hard to prove that the Commission should have acted.  But in this case, the Commission clearly felt it should act when it tabled its reasoned opinion.

Thirdly, the question whether the Commission might ultimately fail in its pursuit of Art. 7 TEU procedure and use it as an excuse for withdrawing its reasoned proposal is misplaced and leads the entire rule of law mechanism astray. The Polish government had more than enough time to do something meaningful (restore the independence of the Constitutional Court, unpack the Court, publish its judgments …). Nothing of the sort happened. Quite to the contrary. The Law on the Supreme Court will enter into force in July and the Supreme Court will join the long list of captured institutions. The ball is no longer in the Commission’s court. it has been formally passed to the Council, at least since 21 March 2018. Why then is the Commission still dialoguing with Poland when it has no longer any legal authority to do so? Zwartveld’s recognition of the mutual loyal cooperation teaches us that the Commission is now bound to act positively, rather than look back, not to mention entertaining any thoughts of backtracking on its reasoned proposal to trigger Art. 7 TEU. Should the Commission drop the case against Poland now, even after winning few concessions from this Member State, it would be publicly changing its mind without changing the facts that gave rise to the rule of law concerns.

Fourthly, the rule of law crisis shows that the guardianship of the Treaties is to be earned, not to be presumed. Art. 19 TUE is but an afterthought for the Commission. Two elements portray a disturbing picture of the once powerful Art. 19 now in tatters. Firstly, the Portuguese judges case presented the Commission with a golden opportunity to side with the rule of law and deploy the law argument more forcefully in the anticipation of the Court’s ruling in the pending case of the Polish judges (C – 192/18). Instead the Commission pleaded with the Court (see para 19 of the judgment in C – 64/16) that the case was clearly … inadmissible. Secondly, the collective constitutional abdication by the Commission was on full display in the Białowieża case.

Art. 19 TEU clearly mandates the Court to ensure that in the interpretation and application of the Treaty the law is observed. The argument made with Zwartveld in mind is that unfulfilled potential lies in the constructive interpretation of the text in the light of the old constitutional precedents. Zwartveld not only builds on earlier Van Gend – Costa – Les Verts, but first and foremost finds new and reframes old rhymes. What this „jurisprudential building and rhyming” teaches us today is to recognise that in the community of law worthy of the name, the politics should always adapt to the law, not the other way around („Politia legibus, non leges politiae adaptandae”).

Opportunistic politics reigns supreme these days in Brussels, with the rule of law being thrown out Mr Juncker’s window. As of today, the Art. 7 TEU time line and road map for actions drawn by K. L. Scheppele, D. Kochenov and L. Pech back in December 2017 are clearly not adhered to by the institutions. I realise all too well that this Commission will shrug its collective arms and ask „Zwartveld? Les Verts? What Zwartveld? What Les Verts?” and look the other „pragmatic way”. However, lawyers and media should not let the Commission off the hook this time. Taking Art. 7 TEU off the table and cutting a deal with the right wing government in Poland would strike a final deadly blow to the EU rule of law. Exposing the Commission’s constitutional procrastinations by writing, calling a spade a spade, honouring the precedents, and yes, last but not least, by connecting the elusive jurisprudential rhymes, are the least we can do right now. We must not let „Zwartveld/ Les Verts talk” be marginalised and looked at as a legal oddity from another era. Rather, these must continue to serve as the foundational blocks of the EU legal order, blocks that need to be brought back into our today’s discourse on the rule of law.

This Commission might, and will be gone, soon, but the long-term consequences of its failed policies will stay with us much longer. An uneasy question thus looms large. Will the honoured legal rhymes prevail over time? As of writing, I am concerned that they indeed might not. Just like myths need able story-tellers, rhymes always live through, and thanks to, the resolve of their judicial and political guardians …

*The analysis of Zwartveld comes from my forthcoming book, Procedural mind in the EU Law. An Essay in Procedural Thinking

DOWNLOAD PDF
LICENSED UNDER CC BY NC ND
SUGGESTED CITATION  Koncewicz, Tomasz Tadeusz: Dusting off the Old Precedent – Why the Commission Must Stick to the Art. 7 Procedure Against Poland, VerfBlog, 2018/6/12, https://verfassungsblog.de/dusting-off-the-old-precedent-why-the-commission-must-stick-to-the-art-7-procedure-against-poland/, DOI: https://doi.org/10.17176/20180612-221626-0.