Ernst-Wolfgang Böckenförde’s work has received extensive scholarly attention beyond Germany in recent years, with incisive discussions of his legal and constitutional theory, his theorization of the relation between politics, law and religion, and his intellectual mentors. But amid Brexit and the run-up to the European elections in May 2019, it is worthwhile returning to some of the finest moments of Böckenförde the public intellectual. He penned his writings on the process of European integration just after having retired in 1996 from both the Federal Constitutional Court (after the usual twelve years judges may serve on the constitutional bench in Germany) and also the University of Freiburg, where he had served as professor of public law, constitutional and legal history and philosophy of law since 1976.1)

Böckenförde was a proponent of European integration, regarding it as desirable first and foremost from a political point of view: as a peace process. But he formulated four cardinal warnings about the way the process was being conducted. Re-reading today his writings penned in the 1990s and early 2000s, Böckenförde’s warnings appear almost prophetic. They chiefly concerned (1) the issue of democracy internal to the EU, (2) the weakness of European cultural policy, (3) the tensions arising from discrepancies between European economic and fiscal policies, and (4) the issue of diverging views between EU member states as to the ultimate purposes of integration.

(1) Böckenförde’s democratic theory is intimately tied to the concept of the “chain of legitimacy”. In representative democracy, all political decisions ultimately need to be traced back to the people, for these decisions to carry democratic legitimacy. The “chain of legitimacy” may be long, but it must not be interrupted. However, in the EU the chain of legitimacy does not flow from the European electorate to the European parliament which then forms the government. Nor does the EU feature direct elections for any of its top executive positions. Instead rules and regulations are predominantly generated by the representatives of the governments of the member states with only limited participation by the European parliament. This created both a democracy deficit internal to the EU, Böckenförde wrote, and precluded the formation of a sense of a European demos responsible for its own destiny. By design instead, the architecture of the EU reinforces representation via the national governments and as a result the reification of national political cultures. Böckenförde proposed instead the adoption of a more federal structure in order to relate the different polity levels in the union, with the principle of subsidiarity broadly guiding the distribution of competencies.

(2) Böckenförde warned that far too little was done to integrate the peoples of Europe on a cultural level – not to replace national belonging, but to complement it. He argued that Europe needed joint history textbook commissions to transcend the nation-focused history curricula still in place in EU member states. He lamented that European publics still consumed their news almost exclusively through national media that necessarily tended to prioritize national over European themes. He liked to invoke Jean Monnet, one of the architects of the EU, who famously said: “If I were to do it all over again, I would start with culture.” Böckenförde repeatedly criticized the fact that the process of integration was predominantly organized along economic dimensions (which he felt were necessary), with too little consideration given to cultural issues; namely, how to increase cohesion between the peoples of the EU member states, and how to foster the level of identification with one another that the economic union based on joint liabilities would require. Shared possibilities for democratic participation were not sufficient, Böckenförde argued, to create a common democratic culture and social cohesion between the peoples of the EU. Without a European cultural policy, the “market-economic approach” that dominated the process of integration “will not lead to greater unity, but to greater separation”. Importantly, Böckenförde pointed out, strong commitments to a shared European culture should not be feared for leading to the demise of national appreciations. One was not forced to choose between being European and, say, German, or Portuguese. People were capable of multiple and overlapping identities, being both British and European, for example, at the same time. But a European sense of belonging would not evolve simply from greater economic interdependence and periodic elections (which, besides, were still sites of competition between nation-based, not EU-based parties). A European sense of belonging would require institutions designed to promote it.

(3) With the 1992 Maastricht Treaty, the members of what was then the European Economic Community decided on the deeper economic and fiscal integration, and a sub-group on a common currency. The implications of the currency union were too little explained to EU citizens with the result, Böckenförde wrote in 1997, that once financial crises were to break out, European publics would be ill prepared and therefore reluctant to put up the transfer payments such crises required. Furthermore, while Böckenförde welcomed the creation of the single market, he warned that the political integration was lagging behind the economic integration, with potentially disastrous electoral consequences: while EU member states were less and less capable of regulating their internal markets (as this competency had shifted to the EU- level), they remained nevertheless responsible for labour market policy and distributive social policy in the eyes of the national voter. A legitimacy deficit would arise: the member states are still seen as responsible for the common good of their citizens, but national governments are no longer sovereign to set up restraints for the common market. The Euro crises and the political crises ensuing in their wake, especially in Greece, Portugal and Italy, confirmed Böckenförde’s concerns.

(4) Finally, Böckenförde defended the idea of a “multi-goal Europe” at a time when even uttering the possibility of a “multi-speed Europe” was highly unpopular among pro-European publics. Some saw in the idea of a multi-speed Europe an insult to the members who had just joined, others suspected in the phrase the hidden desire among the economically stronger members to share only some privileges of EU membership with new candidates, but not all; in other words, to “cherry pick”. But Böckenförde’s reasoning was rather different. Those advocating an “ever-closer union” (especially Germany and France at the time) would need to accept that other member states might never wish to pursue the same goal, notably Britain. Therefore, Böckenförde insisted, it did not help to simply aim at a “multi-speed Europe”, but one also needed to acknowledge the reality of a “multi-goal Europe”. The practical implications of this were that one would need to open different EU treaty mechanisms to different audiences and drop the goal of an ever-closer union for all member states. For example, he proposed that Turkey might eventually join the Euro group and thus the currency union, but stay out of the political union of the EU. Britain on the other hand should be allowed to opt out of those mechanisms aiming at a closer political union, while remaining economically integrated. Had Böckenförde’s engagement for a “multi-goal Europe” gained more currency earlier, today’s Euro-sceptics might have less success in winning votes with arguments against an ever-closer union.

Böckenförde’s vision of Europe was one deeply appreciative of the diversity of the European peoples, rich in different cultural, societal, political and institutional traditions, but united in the idea of building a shared area of freedom, security, and justice based on a common understanding of human rights and a social responsibility to regulate market economies. His vision reflected his overall approach: to meet others at eye-level, and to let the better argument win, pragmatic and non-ideological.

Mirjam Künkler Prof. Miriam Künkler, PhD, is Research Professor at the Swedish Collegium for Advanced Study and currently a Senior Research Fellow at the "Multiple Secularities" project at the University of Leipzig. 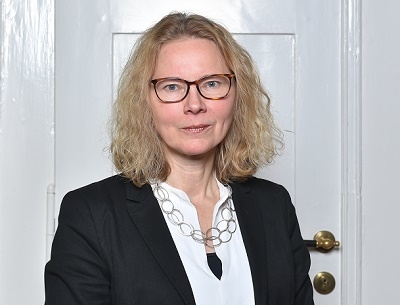 Tine Stein Tine Stein is a Professor of Political Theory at the University of Göttingen.