How can a democratic constitution survive an autocratic majority?

If I try to derive the answer to this question from what we heard about the cases of Hungary and Poland, I am afraid I have to say: hardly. Each of the three panels of this workshop showed the same pattern:

In Hungary, this situation allowed a formally legal regime change through enacting a new constitution, accompanied by the enactment of a new category of laws that, although not part of the constitution, can be amended only by a two-thirds-majority. Even if the opposition should win an election (which is, of course, unlikely under the new conditions), it would not have much room for implementing its program. Should it win a two-thirds-majority (which is even less likely), it would be practically compelled to abolish the Fidesz Constitution and enact a new one that would probably be not less partisan than its predecessor.

In Poland, to the contrary, the PiS-Party can only change legislation, not the constitution, which severely limits its capacity to pursue a legal regime change. So, the ruling party attempted to change the political system by open violations of the constitution. One would expect civil society to react vehemently to such attempts. But societal protest remained feeble. What if the rule of law is not regarded as a value worth of being defended?

If Hungary and Poland seem to be lost for liberal and democratic constitutionalism, at least for the time being, the next question is how democratic constitutionalism can prevent an autocratic majority. The task is to make it difficult for an autocratic parliamentary majority to capture the institutions of critique and control of government and to undermine separation of powers. The first concern would, of course, be to design an electoral system that avoids the translation of a normal majority of votes into a super-majority of seats. Secondly, it would be important to shield all important rules of the democratic game against amendment by simple majorities. This means entrenchment on constitutional level. Election laws are certainly part of the rules of the game. The same is true for the composition and powers of the constitutional court. In addition, the instruments of militant democracy allow for a prohibition of political forces that wish to overthrow the democratic system.

However, as the two cases show, all this is in vain if an autocratic party succeeds in winning a super-majority or openly disregards the provisions of the constitution without meeting strong resistance from society. This refers us to the deeper sources of the problem: the weakness of representative democracy, and, since it is difficult to imagine a liberal democracy without political parties, also the loss of trust in parties, partly because of bad performance, partly because of a new inclination toward populism. These tendencies can be observed not only in the two countries we dealt with, but also in a growing number of democratic states that have not yet turned to authoritarianism. Insofar, constitutions are of little help as we find ourselves in the sphere of the societal and cultural preconditions of constitutionalism. Here, legal means reach their limits. Other precautions will have to be employed, education perhaps being the most promising one. 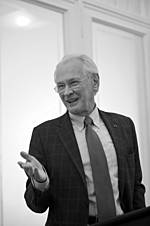 Dieter Grimm Prof. em. Dr. Dr. h.c. mult. Dieter Grimm, LL.M. (Harvard) is Professor emeritus for Public Law at the Humboldt University, Berlin. From 1987 to 1999 he served as justice at the Federal Constitutional Court, from 2001 to 2007 he was Rector of Wissenschaftskolleg Berlin.
Other posts about this region:
Polen, Ungarn No Comments Join the discussion
Go to Top