How Canada Capitalizes on Ukrainian Refugees

For those fleeing the war in Ukraine, Canada launched a new temporary residence pathway, the Canada-Ukraine Authorization for Emergency Travel (CUAET) program on March 17, 2022. Offered in conjunction with a special family reunification program, CUAET is open to an unlimited number of Ukrainians regardless of their existing ties to Canada. While seemingly an open and benevolent gesture, Ukrainians are welcomed inside the Canadian nation not as humanitarian subjects but primarily as workers to potentially contribute to the Canadian economy.

Those more attentive to the protracted nature of the current “refugee crisis”, point to the differential treatment of others seeking asylum in Canada. In contrast to the unlimited number of Ukrainian nationals potentially streamlined through CUAET, the country restricted the numbers of Syrian and Afghan refugees eligible for asylum and, even then, has only admitted 8,500 Afghan refugees (of a possible 40,000) and 25,000 Syrians.

Temporary status is not better than permanent residency

What are the limits, then, of this recent benevolence? Unlike the family reunification program, which provides a pathway to permanent residency, CUAET will admit an unlimited number of Ukrainians, but on a temporary basis, granting residency for a maximum of three years. In other words, those arriving through the CUAET will not be refugee claimants, hence they are not afforded the typical (albeit imperfect) refugee-determination process. Nor will they be government assisted refugees who arrive with the entitlements of permanent residents. Indeed, the government has clearly stated that “the CUAET is a temporary residence pathway and is not a refugee stream”.

National and international temporary migration programs that only allow provisional entry, inevitably reproduce precarity, dependency, and conditions ripe for exploitation. In Canada, since the 1960s, the temporary employment of foreign nationals has proliferated across a range of employment sectors. Facilitated by the Temporary Foreign Worker Program,migrant workers often arrive to congested living arrangements, dangerous work-environments, low wages, and little legal protection or opportunity to remain.

These workers are branded as good enough to work, but not good enough to reside permanently in the country or to access supports. Migrant advocates have fought against these conditions, demanding an end to temporary migration schemes that primarily benefit employers and states. Ostensibly benign, CUAET chips away at these efforts, and consigns those fleeing violence in Ukraine to uncertainty in Canada.

Temporary status also means that Ukrainians will be ineligible for settlement programs, language classes, employment assistance, and training programs, which offered with the view to social and economic integration, are only accessible to permanent residents.

Interpretations of the CUAET as a more viable route to safety within Canada have remained singularly focused on the unlimited number of entries the program may facilitate. However, when read against the Canadian government’s unwillingness to waive visa requirements for Ukrainian nationals, a more insidious agenda is revealed. If entry visas to Canada were waived, Ukrainians could board a flight, and upon arrival, claim asylum, initiating a process, enabling them—if successful—to remain in Canada permanently.

Yet, despite the horrors in Ukraine, at a House of Commons’ Standing Committee on Citizenship and Immigration meeting on March 1, 2022, Liberal members unanimously voted against a motion to implement visa free travel from Ukraine to Canada. In doing so, the government actively blocks Ukrainian nationals from claiming asylum in Canada—a stark contravention of Canada’s stated commitment to refugee protection.

Canada capitalizes on the Ukrainian crisis to economically strengthen the nation

CUAET explicitly states that “applicants are encouraged to apply for a 3-year open work permit at the same time as their [temporary] visa application”. This is a timely use of temporary open work permits for Canada, which has been experiencing acute labour shortages. Exacerbated by the COVID-19 pandemic, the number of job vacancies in Canada reached an all-time high of close to 1 million at the end of 2021. In response, Canada decided to actively streamline a much higher number of skilled workers applications and the country welcomed over 400,000 new permanent residents in 2021, with similar plans for 2022 and 2023. A steady influx of Ukrainian workers will no doubt further assist the Canadian state in tackling labour shortages.

Entry through CUAET requires Ukrainians to apply online for a Canadian visitor visa, and to provide their biometrics. The monthly minimum wage in Ukraine is 6,000 UAH, which equals to $257 Canadian dollars. Those able to pay for biometrics and those able to afford the travel to the specific Canadian visa applications centers (VACs) in neighbouring countries to submit their files, will, no doubt, represent privileged, higher-class migrants, proficient in Canada’s official languages. These premises will translate into primarily recruiting well-resourced migrants who will become productive (if temporary) subjects inside and for the Canadian nation.

Those lacking monetary resources will be stuck claiming asylum in Ukraine’s neighbouring countries. Notably, the VACs are not easily accessible. In Romania, for instance, the only VAC is in the capital city of Bucharest. Most people, however, enter Romania at the Siret border which is 500 km away. In Poland, the only VAC is in Warsaw, 400 km from the main border entry of Medyka. Similarly, in Moldova, the only VAC is in the capital of Chișinău, which is 200 km from the Mohyliv-Podilskyy border. These are large distances, especially for those crossing on foot. There are no VACs listed in Hungary and Slovakia.

CUAET, celebrated by many, appears an open and benevolent strategy. Yet, Ukrainians seem welcomed inside the Canadian nation, mainly as workers and only secondary as humanitarian subjects. Moreover, the program runs the risk of undermining the country’s already tenuous refugee protection system by reinforcing the economistic priorities of Canadian immigration and further normalizing temporary migration schemes.

Other posts about this region:
Kanada, Ukraine

Raluca Bejan Raluca Bejan is an Assistant Professor at the School of Social Work at the Dalhousie University in Halifax, Canada. 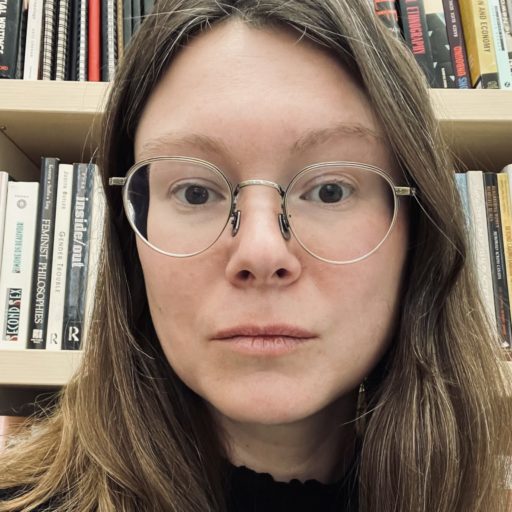 Catherine Bryan Catherine Bryan is an anthropologist and assistant professor at Dalhousie University's School of Social Work in Halifax, Canada. Her research focuses on labour migration and the long-arm of capitalist political economy.

Other posts about this region:
English Articles, Kanada, Ukraine 3 comments Join the discussion
Go to Top