The Sleep of Reason Produces Monsters 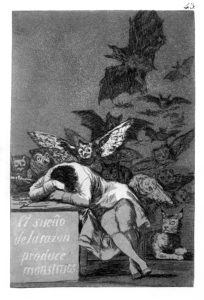 Goya’s enigmatic drawing seems to contain a message which is reverberating down the centuries to sound a cautionary note in our current political environment. The slow but steady rise of authoritarian nationalism in Putin’s Russia, Kaczyński’s Poland, Orban’s Hungary, Erdogan’s Turkey, Wilder’s Netherlands, Kjærsgaard’s Denmark, Le Pen’s France, Brexit Britain; now crowned by President-elect Donald Trump as the leader of the free world poses potentially serious challenges to our contemporary politics. However what is at risk in these developments is not garden variety politics – whether to build an opera house or a football stadium – or even reasonable disagreements, and pluralistic worldviews about the good life or questions of justice, but rather it relates to the basic primordial deeply-rooted values upon which our interactions are based – capital ‘C’ Constitutional politics. The rise of authoritarian nationalism seems to question (not for the first time in history) the very basis upon which we relate to each other as free and equal and how we increasingly relate to those outside of the state of our citizenship or residence as free and equal. Whereas these ideas predate the ‘post-war consensus’, they have arguably received their most powerful expression and protection in this epoch which is under threat of unravelling completely due to contemporary authoritarian trends.

Part of the malaise surrounding our contemporary world is a tendency to view constitutional politics, to borrow Goethe’s metaphor, as architecture rather than music; as fixed and immutable rather than a dynamic phenomenon which requires the ongoing assertion and reassertion of the key values and terms of engagement of our mutual interaction with each other and with authority. At the risk of stating the obvious, we must constantly remind ourselves that politics, including constitutional politics, is dynamic, and as such we cannot be complacent about the values which have crystallized in the post-war era. This doesn’t necessarily mean, as the agonists have it, that politics is always necessarily about intense political struggle; but at a very minimum it reminds us that politics, including constitutional politics, is about iteratively articulating, justifying and defending our constitutional values on an ongoing basis.

With all the caveats of apportioning blame from the vantage point of hind-sight and running the risk of appearing to dispense pieties from on high, I think there are a couple of things those of us who care deeply about the achievements in prosperity, justice and recognition of previously marginalised sections of society of the post-war era, and who think that the moral basis of human interaction should still be liberty and equality (or one of its many manifestations), can learn from these developments and the nature of politics. There are also a number of points we can put into practice to defend these values.  We can be neither complacent nor leave its defence to others. We must, all of us, as educators, parents, partners, spouses, children, siblings, carers, employers, employees, colleagues, friends, acquaintances even strangers – engage in the ongoing articulation, justification and defence of our constitutional values if they are not to succumb to the forces of authoritarian nationalism and possibly worse.

To this end, and drawing from recent experience, it is worth elaborating a number of key points we can put into practice to more effectively undertake this enterprise to quell the threat to our constitutional values in recent times. The key principle of these points is reason, not only our reason, or abstract reason, but more importantly appealing to the reason of those who are seduced by authoritarian nationalism’s siren song.

1. (Self)Education: If we care about preserving our constitutional values we must, all of us, first educate ourselves. This includes revision classes of our systems of government, the basic idea of social democracy and the justification of the welfare state and individual rights (for which Wikipedia is a useful resource).   In the debates leading up to the Brexit vote in the UK, for example, the remain camp’s mealy-mouthed defence of EU membership came, more often than not, from a position of relative ignorance about the details of the EU and what exactly it does, and doesn’t do. There were many available defences of, for example, EU immigration policy which failed to gain any traction in the debate, being drowned by the frequent mis-truths of the leave campaign and the embarrassed silence of many of the protagonists of the remain campaign. More preparation and more clear factual information about the EU could have helped persuade many more of the advantages of the European project, that the costs were far outweighed by the benefits, and exploded the lies and myths peddled by parts of the leave campaign.

2. Patience: Defending our constitutional and political values is not easy and our attempts will not always succeed, particularly not at first. However we must persist, meeting lies or prejudice with reasoned defence, again and again until the message gets through, always appealing to the reason of our interlocutors.

3. Courage: Sometimes we will find ourselves in the minority and continuing the fight will require courage. However, we need, in a context rather different to Macbeth, ‘screw our courage to the sticking place’ to ensure that we can meet the attacks on our constitutional values with resilience.

4. Persuasion: We need to (re)learn the art of rhetoric, persuasion and bringing people around to our point of view. Part of this involves some of the previous points but it also includes being aware of the ways in which political discussion evolves and develops. This means keeping on top of political discussion: there’s no point ‘banging on’ about percentage points of GDP growth when the conversation has moved on to other issues such as immigration. This requires a certain intellectual alacrity which we need to practice again and again. Another aspect of persuasion is putting yourself in the position of your interlocutor and trying to see things from their point of view. There is a sense that in much recent political debates we have failed to see the wood for the trees, shrilly crying foul about procedural transgressions, bureaucratic peccadillos or ad hominem attacks when those that needed persuading most were looking elsewhere or had larger, more immediate, concerns.

5. Justify but ask for justification in return: Appealing to the reason of our co-citizens is, of course, in part an exercise in justification. This involves showing how certain values are objectively good values, how certain ideas are objectively good ideas, how certain policies are objectively good policies in the context of engaging with each other as free and equal. We cannot out-source the justificatory burden to our teachers, to our elected representatives, to the media. We must actively day to day engage in the justification of our values reminding our co-citizens how they protect and benefit us all. By the same token where we are met with objections or counter-claims, we should not resort to ridicule or derision; we too are entitled to justification and so we must patiently but persistently interrogate our co-citizens as to why we should believe that there is a conspiracy of elites, or that the entire political class is completely corrupt or that elections are rigged or why media outlets are biased, insisting on evidence where necessary.

We must not derelict our duty to defend our constitutional values through persuasion and reasoned argument in a spirit of mutual respect. Otherwise, we are in serious danger of failing to heed Goya’s warning and inadvertently allowing reason, and in particular the reason of those seduced by authoritarian tendencies, to drowse in our constitutional politics with potentially disastrous consequences.