A New Constitutional Dawn for Unionism?

On 30 June 2021, the Queen’s Bench Division of the High Court of Justice in Northern Ireland High Court in Belfast, ruled on two applications challenging UK legislation implementing the Protocol on Ireland/Northern Ireland annexed to the EU/UK Withdrawal Agreement. This constitutes the litigation arm of the new-found unionist goal to “scrap the protocol”, and arguably the Withdrawal Agreement. Colton Judge for the High Court rejects all the claims. In doing so, he delivers a few messages which are suitable to deepen divisions in Northern Ireland. For example, the statement that accession to the EEC was a “surrender” of sovereignty chimes with unionist vocabulary: on Northern Irish walls, the old slogan “no surrender” is already related to the Protocol. Further, the judgment portrays the extreme flexibility of UK constitutional law as its strongest virtue, and classes international treaties, including the Protocol and the Good Friday Agreement, as merely political compromises not suitable for adjudication. If these views were confirmed before the UK Supreme Court, the EU or anyone else would be well advised to be very careful when concluding agreements with the UK, and to pay close attention to effective enforcement mechanisms beyond UK courts. Fortunately, this judgment will be appealed. Thus, there is hope that the Court of Appeal and/or the UK Supreme Court promote a more realistic view of how the UK can integrate into a rule based international order.

A thorough analysis of this litigation would better wait until the UK Supreme Court dictum. This blog highlights this litigation’s political background and the High Court’s ultra vires tendencies and indicates how his reasoning, if upheld, would shape the relevance of international agreements between the UK and the EU.

The litigation is part of the unionist challenge of the Protocol Ireland/Northern Ireland, which so far made headlines also through violence in the streets of Belfast.

Unionism and Nationalism are distinguished by the aim to retain Northern Ireland as part of the UK (Unionism) and to re-establish Irish Unity (Nationalism), and also associated with cultural markers such as language, religion and celebrations (St Patrick’s Day, the Irish national holiday, and the 12th July, celebrating the 1690 victory of William of Orange over James II in 1690, arguably initiating “Protestant ascendancy in Ireland”). The 1998 Good Friday Agreement aims to move the dispute on Northern Ireland from militia to politics. Yet, British legislation (Northern Ireland Act 1998) endorses both Unionism and Nationalism: The principle of “power-sharing” between Nationalists and Unionists is mirrored in the requirement of “cross community voting” for issues of enhanced relevance, which requires a majority of designated Unionists and designated Nationalists (section 4). Under section 42, 30 members of the legislative assembly (MLAs) can require a cross-community majority in any Assembly vote. Further, the First Minister has to be nominated by the largest party, and the Deputy First Minister by the 2nd largest party (Section 16 A), which in practice means that the First and Deputy First Minister are a Unionist and Nationalist. Current polls suggest that after the next Assembly elections in May 2022, the First Minister might be a Nationalist for the first time in Northern Irish history.

The first application was lodged by a coalition of high level political Unionism (Allister et al): the then leaders of the unionist parties represented in the Northern Ireland Legislative Assembly (Arlene Foster, DUP, Steve Aiken, UUP and James Allister, TUV), the then First Minister of Northern Ireland (Foster), a former leader of the UUP, who was Northern Ireland’s First Minister after the Good Friday Agreement, which he co-negotiated (William David Trimble, Baron Trimble, a member of the House of Lords), a former MEP for the Brexit party (Benyamin Naeem Habib) and a prominent “Brexiter” who was a Labour MP before she became a member of the House of Lords in 2020 (Baroness Catherine Hoey, originally from Northern Ireland). The second applicant, Clifford Peeples, is a pastor in Northern Ireland who identifies as a unionist and has convictions on grounds of possessing fire arms. Allister et al had no influence in Peeples bringing his claim. However, they cooperated closely with this litigant. One hopes that this does not indicate a general trend. First commentary on the judgment already conjures the 1974 unionist strike against the Sunningdale agreement as exemplary.

Why did the High Court rule on the compatibility of the Protocol Ireland/Northern Ireland U with UK law, on the basis of a challenge brought more than 12 months after its adoption in the first place? The formal answer is that the challenge was to a statutory instrument adopted on 9 December 2020, the Protocol on Ireland/Northern Ireland (Democratic Consent Process) (EU Exit) Regulations 2020 [2020 Regulations], and thus the judicial review application on 5 March 2021 was just within the maximum period of three months (paragraph 323). However, Colton Judge found that “in effect the challenge is to the Protocol and the acts of parliament implementing it in UK law” and proceeded on that basis. In other words, although the UK government correctly claimed that the application was delayed in so far as it challenged the Protocol (and the Withdrawal Agreement) as such, the judgement can be read as answering  the political question whether the protocol needs to be scrapped.

On top of that, in deciding whether the Protocol violates Article 50 TEU, Colton Judge encroached on the CJEU’s monopoly to interpret EU law.  Larkin QC as counsel for the applicants argued that a durable relationship cannot be created by the Withdrawal Agreement (paragraph 289). Formally, the Protocol is not a permanent instalment. Article 13 paragraph 8 assumes that it will be superseded by subsequent agreement(s) between the EU and the UK, possibly in parts before its final replacement. Article 18 provides the UK with the opportunity to unilaterally rescind Articles 5, 7-10 Protocol following a vote of consent in Northern Ireland. However, reservations on whether this complies with Article 50 TEU are legitimate. Yet, the CJEU arguably has jurisdiction on this matter: under Article 12 paragraph 4 Protocol the CJEU’s jurisdiction is retained as far as Articles 5 and 7-10 are concerned. The arguments brought by this judicial review focus on those provisions. Accordingly, the CJEU’s interpretive monopoly would apply.

Catering to the litigation’s political aims?

The High Court arguably went beyond the remit of judicial review in other, and more serious aspects. In several instances the High Court supported the political argument of the Unionist claimants unnecessarily, contributing to the triumphant declaration that substantively they had won their case.

This is most apparent in the High Court’s consideration of the Acts of Union of 1800, which was ideologically central to the unionists’ claim. That acts solidified appropriation of Ireland into the United Kingdom, raising its status from a mere territory also governed by the crown to a territory where citizens are treated equally with those in Great Britain. Historically, it would seem that the Act of Union was overridden by Irish independence, which the UK accepted by the Irish Free State (Agreement) Act 1922. There was even precedent in that the House of Lords found the Act of Union ceased to be effective upon passing of the 1922 Act (paragraph 103). Nevertheless, the High Court found it necessary to state rather early on that the Withdrawal Agreement violates the (no longer existent) 1800 Act by limiting the access of GB providers to the market in Northern Ireland (paragraph 62). Colton Judge rejects the claim that establishing different trade regimes for Northern Ireland and Great Britain violates Article VI of the Acts of Union, through proposing a new constitutional doctrine around constitutional statutes: the Act of Union (1800) and the Withdrawal Agreement Acts (2018, 2020) are all considered as acts of constitutional status. Accordingly,  the lex posterior derogat principle renders the Act of Union irrelevant in so far as it is overruled by the younger legislation. Elevating the 1800 Act to current UK constitutional law clearly caters to the Unionist cause in this matter.

The UK and international law – the long arm of dualism

In relation to all the challenges the High Court had ample opportunity to deliberate on the UK’s stance on international agreements under a dualist constitutional principle, with the added benefit of an extremely flexible constitution.

The judgment duly recites the UKSC Miller judgment, which explains how UK-style parliamentary sovereignty and an executive prerogative in negotiating international treaties can only co-exist with a dualist approach to international law: since international agreements have no effect whatsoever internally, parliamentary sovereignty can play its role when the international agreement is incorporated into national law. (paragraphs 68 – 69) Closely related to this finding, the High Court also cites the passage which goes to Dicey’s 1915 treatise in order to find that the unwritten UK constitution is extremely flexible (paragraph 92) and the conviction that this very flexibility allows preserving parliamentary sovereignty. These lines of thought allow the High Court to accept modification of section 1 Northern Ireland Act 1998, which is a constitutional statute, by a mere regulation, as well as  the implicit repeal of elements of the Act of Union. In relation to international law, the reasoning is at times reminiscent of Austin’s doctrine that international law merely constitutes a moral authority due to its political character. The Protocol itself is characterised as “the product of political negotiations. It is a compromise. It provides a “high level legal framework as a solution to its aims and has left many of the practical aspects of implementation and technical details for the ongoing work of the UK government and the EU to the Joint Committee established by it”. (Paragraph 256)

Where does this all go?

One wonders how a country whose courts view its constitution’s flexibility as a primary virtue and stress the merely political character of international law, can be expected to align to a rule-based legal order? At the very least, in agreements with the UK attention needs to be dedicated on enforcement, implementation, and mutuality. Any openness of phrasing, which would reflect a continental tradition of drafting, would lead the UK recipient to find that this agreement is political, and not enforceable.

This also highlights a fundamental weakness of the Good Friday Agreement: this agreement does not entail any dispute resolution mechanism, or explicit provision on how divergence on interpreting its clauses can be overcome. Accordingly, Unionists, Nationalists, the UK, and Ireland can endow its relatively open norms with contradictory meaning.

As mentioned, the case will most likely end up in the UK Supreme Court. There is thus hope that the political messaging of the reasoning is reduced. However, as the passages cited from the Miller ruling demonstrate, there is less hope that the UKSC will promote a different vision on the UK’s relationship to international law. 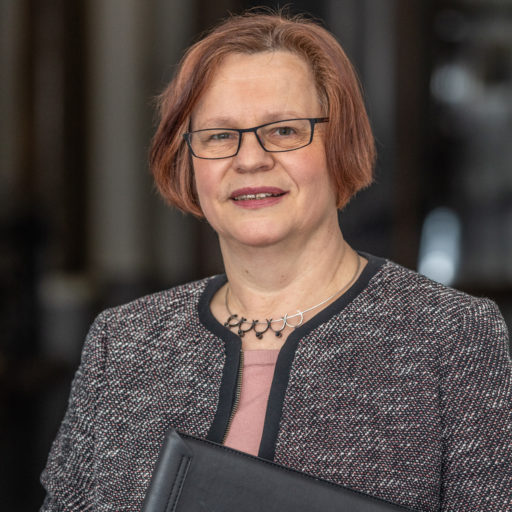 Other posts about this region:
Vereinigtes Königreich 1 comment Join the discussion
pixel_not_set
Go to Top