On 6 April 2021, Alibaba, a leading e-commerce platform, was fined $2.75 billion due to it abusing its dominance in the Chinese market. In the official statement by the regulator, Alibaba’s behaviour was described as having “eliminated and restricted competition in the online retail platform service market”, as well as having “infringed on business of the merchants on the platform”. Alibaba accepted the fine without appealing and promised to ensure its compliance. It should be noted that it only took four months from the start of the anti-trust investigation to the issuance of the huge fine, making the investigation duration far below average (9–12 months). Three weeks later, Chinese regulators started a new investigation on Meituan, the O2O food-delivery and services-on-demand services giant, for similar anti-competitive conduct. All these measures signify Chinese regulators’ strong determination to crack down on monopolistic conduct.

Despite the anti-trust fine on Alibaba attracting worldwide attention, there are not many disputes around this punishment. According to the administrative statement, Alibaba had imposed exclusivity requirements on its merchants. In China, this practice is called ‘choose one from two’, which means that merchants signed with the e-commerce platform of Alibaba are not allowed to do business on other platforms. If there is a lack of market dominance, such exclusivity agreements are perceived to improve market competition. However, when the market share reaches 50%, such conduct becomes detrimental to market competition as well as consumers, and therefore should be illegal. Considering that the market share of Alibaba e-commerce platforms amounted to 76.21%, 69.96, 63.58%, 61.70%, and 61.83% from 2015–2019, respectively, the penalty for its abuse of market dominance is undisputable.

Although the fine of $2.75 billion set a historic record, it is generally agreed that this amount was not exorbitant. According to Chinese anti-trust law, companies that abuse their dominance of the market should be fined between 1% to 10% of their sales. This record fine constitutes 4% of Alibaba’s total 2019 sales in China, which is below the median. In comparison, the anti-trust penalty on Qualcomm of $985 million in 2014 was as high as 8% of its total 2013 sales. As a result, as the CEO of Alibaba told the media, this fine would not exert a huge impact on the company’s operation. He also promised to assist regulators in maintaining market order.

‘Choose One from Two’

Chinese regulators ascertained that Alibaba had imposed an exclusivity agreement on its merchants for more than five years. In fact, ‘choose one from two’ was perceived as common practice for tech companies for a long time. One of the most renowned cases can be traced to November 2010, when Tencent declared that users of QQ (the most popular instant messaging software in China) were required to uninstall 360 Safeguard (an anti-virus software provided by Qihoo), or else QQ would suspend its service on their laptops. However, this exclusivity clause was legitimate since the Supreme Court of China ruled that Tencent did not have market dominance in 2014. Afterwards, such practices quickly spread to other areas. Taking the competition of food delivery service for example, merchants in several cities in China asserted that they were required to choose between Tencent-backed Meituan and Alibaba-owned Ele.me in 2019. These anti-competitive conducts were punished by local regulators. The most common battlefield for ‘choose one from two’ is amongst e-commerce platforms, where e-commerce giants such as Jingdong, Suning, and Pinduoduo have repeatedly complained about Alibaba’s exclusivity agreements to suppress market competition.

The anti-trust punishment on Alibaba may deter monopolistic conduct and restore order to the market. Other tech giants are expected to adjust their market strategies accordingly. But regulatory attention on Alibaba goes far beyond the scope of anti-trust risks. For instance, Ant Group, Alibaba’s financial technology (fintech) arm, attracted intense regulatory attention in the past six months. In November 2020, Ant’s record $34.5 billion IPO was suspended by the Shanghai and Hong Kong stock exchanges, mostly due to its regulatory risks. Since then, Ant has been inquired by Chinese regulators thrice, the third time being as recent as 12April, 2021. Regulatory measures on Ant seem to be independent from the anti-trust penalty on Alibaba, but all these measures revolve around the same keyword: platform economy.

Ant Group: Too Big to Fail and Too Connected to Fail

E-commerce platforms owned by Alibaba and Ant work in coordination to achieve and entrench Alibaba’s dominance of the market. Alibaba’s foray into the finance sector started with a third-party payment processor (Alipay), with the objective of providing escrow to resolve a lack of trust in online transactions on its e-commerce platform (Taobao) in 2004. Alipay held the money until consumers’ confirmation of goods having been received. The massive user base from Alibaba helped Alipay gain a competitive advantage in the Chinese market. In turn, the revolutionary e-payments helped Alibaba entrench its dominance in the e-commerce market. At this time, Alibaba’s relationship with regulators could be described as a honeymoon period, due to the latter’s urgent need for finance innovation. Successively, Alipay introduced mobile and QR code payments, driving the shift away from cash in the Chinese economy. Starting out for e-payments, Alipay was able to launch a low-cost financial platform and sell financial instruments to its existing user base. Yu’e Bao was launched in 2013, which allowed Alipay users to earn yield on their money in Alipay app, and immediately became the world’s largest money market fund. Then Ant Credit and Ant Cash Now were launched in 2014 and 2015, respectively, to provide loans to consumers as well as to small and medium-sized enterprises. Soon afterwards, Alibaba’s finance empire was established based on its Alipay platform, with entry permission licenses of all financial sectors, even including banking and insurances. 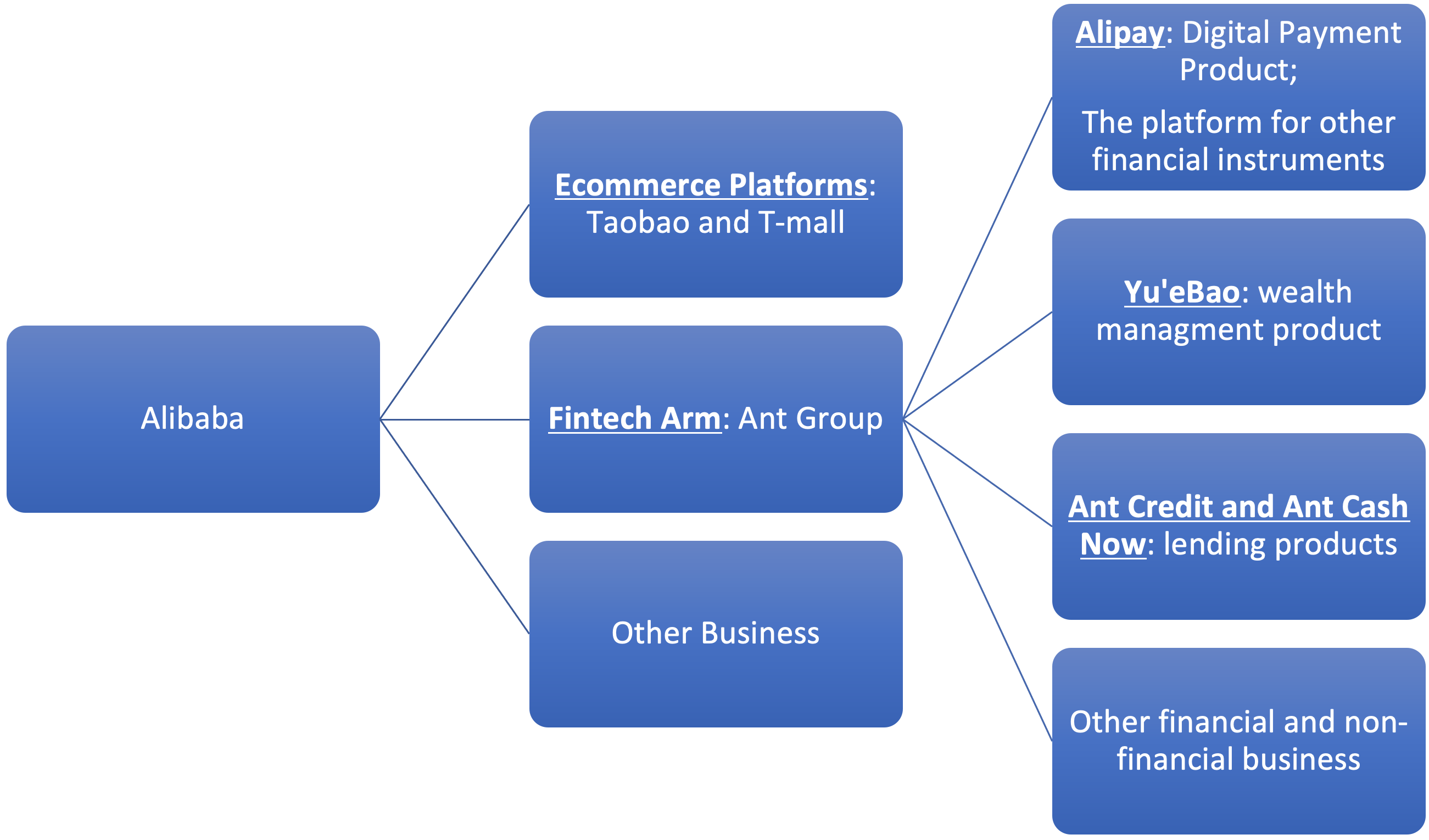 The rise of Alibaba’s finance empire quickly attracted regulatory attention, mostly due to its systemic importance. For one thing, Alipay provided services for over 1 billion users and 80 million merchants, numbers that far exceed any major bank’s customer base in the world, making it too big to fail. For another, Ant cooperates with around 100 banks and 170 asset management companies in its lending services and financial management services, making it too connected to fail. Fintech also multiplies liquidity risks. For instance, Yu’e Bao is able to complete T+0 transaction, which means a transaction can be settled on the same day it is made. Accordingly, any surge in withdrawal demand may lead to a disaster of the whole financial system.

Such huge risks to China’s financial stability require Chinese regulators to impose stricter supervision and regulation on Ant. Other regulatory concerns include an information monopoly over data collection, inappropriate links with consumer lending operations, and improper competitive behaviours. Again, Ant promised to restructure its business as directed by regulators and few disputes were raised around this series of regulatory interventions.

For regulators, the rise of the platform economy is perceived as double-edged sword. It poses significant opportunities and challenges globally, which can be exemplified by the path of Alibaba. The success of its e-commerce platform is mostly achieved by its ability to connect demand (consumers) to supply (online merchants) in the market. It facilitates transactions with technology at low costs, consequently gaining user acceptance. However, platform economies have a systemic tendency to monopolise markets. To be specific, through their interactions with users, platforms gradually gain the dominance of data, which is perceived as the most significant resource in the platform economy. Gradually, platforms become able to provide a variety of data-driven services and expand their business beyond their initial scope. This normally results in a winner-takes-all dynamic, posing obstacles to new entrants to the market. A similar development can be observed in the case of Alibaba, which has developed from an e-commerce platform to a technology empire.

Regulators aim to take advantage of their ability to restructure domestic economic development while containing systemic risks. Recent regulatory measures on Alibaba, including Ant, provide some clues as to how Chinese regulators manage to achieve these dual objectives.

First, platform economies in China should serve national strategic objectives. During the meeting on 15 March 2021, Mr. Xi, the President of China, repeatedly emphasised the strategic role of platform economies in promoting innovation and, accordingly, national competitiveness. In other words, national competitiveness is the objective of Chinese regulators whilst innovation is the means. Therefore, regulatory measures should intervene when platform economies constrain innovation. When the market remains competitive, platforms gain advantages by providing higher quality and lower price services. This requires their continuous investment in research and development, which benefits the whole society. Their contribution to national competitiveness can explain Alibaba’s honeymoon phase with regulators during its early stage. However, monopolies limit platforms’ incentives for innovation, since the dominant platform can easily abuse their user stickiness and dominance of data, keeping its competitors away from the market. In this regard, monopolistic conduct contradicts China’s urgent demand for innovation and should be punished without a doubt.

Second, regulators have their own discretion to determine whether platforms in actuality comply with national strategic objectives. To be specific, Ant described its business as technological rather than financial. If this description was affirmed by regulators, Ant would be able to take advantage of regulators’ preferential treatments for its seeming alignment with strategic objectives of technological innovation whilst circumventing financial regulation and supervision. Accordingly, Ant planned to make public offerings on the Sci-Tech Innovation Board (the STAR Board) in the Shanghai stock exchange. The STAR Board is launched to support sci-tech and innovative enterprises, which is featured as more flexible listing rules and greater access to funding than the Main Board in the Shanghai stock exchange. However, regulators perceived it as misdescription since Ant’s business contributed little to sci-tech innovation but caused systemic risks to the financial system. Since financial stability is also one of China’s top priorities, Ant’s IPO process was suspended. A few months later, regulators instructed Ant to restructure as a financial holding company under China’s financial supervision system. Then, on 16 April 2021, the STAR Board amended its listing rules to restrict fintech companies’ listing by requiring the latter to prove their technology credentials. Evidently, Chinese regulators are still exploring ways to ensure platform economies to in actuality serve for national strategic objectives.

Third, platforms should be managed in coordination with regulators. As mentioned, Alibaba did enjoy a honeymoon phase with regulators for a certain period, which can be attributed to its compliance with the regulators’ demand for innovation. On the other hand, this phase was also due to Alibaba’s active collaboration with regulators. Some commentators attributed recent regulatory measures on Alibaba to the speech made by Jack Ma, the founder of Alibaba, on 24 October, 2020. He criticised Chinese financial regulations as overly risk-averse and inconsiderate of the development of fintech. These media reports oversimplify Chinese regulators’ motivation to regulate Alibaba and platform economies. However, to some extent, Jack Ma’s speech signifies a recent lack of collaboration between Alibaba and the regulators. Alibaba has to pay for this with the most direct consequence – an estimated reduction of $150 billion valuation in the IPO of Ant.

In conclusion, recent regulatory measures are neither expected to significantly impact the business of Alibaba nor of Ant. However, they remind Alibaba of the necessity and importance to engage in innovation and embrace regulation. 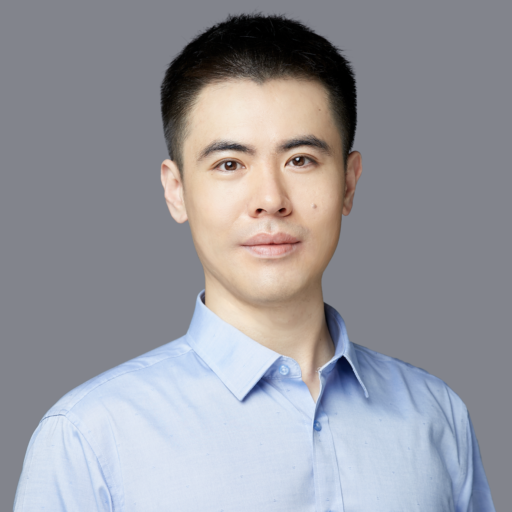