The news that Elon Musk intends to turn Twitter into his private property out of concern for free speech draws part of its force from the paradox it seems to raise: if property is understood in Blackstone’s classic formulation as „that sole and despotic dominion which one man claims and exercises over the external things of the world, in total exclusion of the right of any other individual in the universe“ – how can that be something that benefits the open, public marketplace of ideas and opinions that Twitter supposedly is or should be? Acquiring the right to exploit a good for one’s own private benefit and to exclude everyone else from its use – how does that fit in with the intention of opening up this good to the general public and not excluding anyone at all?

A story of contradiction, disharmony, tension. Like fighting for peace, sinning for virtue. This is the stuff myths are made of, and for that reason alone it should appear appropriately monumental to the ever striving-for-larger-than-life-stature Technoking of Tesla. But more interesting than the man’s personal motives and his apparently somewhat undercooked views on freedom of speech seems to me the question of what property is supposed to be when applied to a marketplace of ideas. The question is also one to ask myself, albeit of course on a scale orders of magnitude smaller, as the owner of Verfassungsblog. 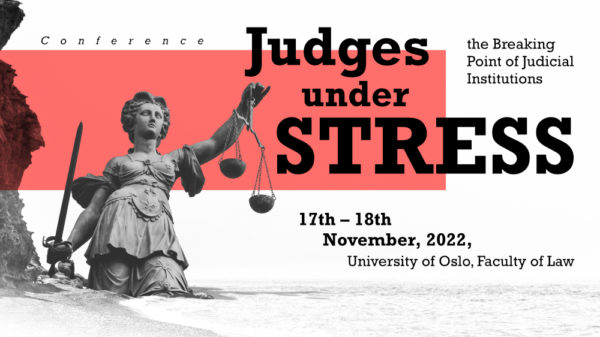 The project Judges under Stress holds the final conference from 17th-18th November 2022 at the University of Oslo. We invite submissions on Institutional Path Dependence – how legal traditions and culture live on, transform and disappear, Judicial Ideology – how judges see themselves in the legal system and Judicial Resistance – how judges can resist and postpone the breaking point of the rule of law. Abstracts of max. 300 words, please send to jusconference2022@gmail.com by 30th May 2022. Find more information here.

Property, with respect to a platform like Twitter, refers to technology, not content. Platform operators claim to be engineers, not publishers: they do not want to be responsible for the content, and if they were, if they decided and chose and took responsibility for what gets on their platform and what doesn’t, then that would be discrimination, censorship, averse to freedom (apropos „despotic dominion“). Their not being held responsible implies in return that they must be open to everyone and not presume to judge whether what people are doing on their platform is good or bad.

Even in the presence of NetzDG and DSA and Trump and hate speech and fake news, this is for the most part still the legally coded self-description of digital capitalism, and it is what gives the appearance of plausibility to Musk’s claim that his private ownership of Twitter can be a beneficial thing for freedom of speech.

The other part of this self-description, on the other hand, doesn’t apply to us at all: if there’s one thing we’re not, it’s engineers. We are editors. We don’t build a platform for others to produce content on, we take responsibility ourselves for what we publish. We are emphatically not a social medium. We are not even a blog in the original sense: it is not the case that our authors just upload what they want to share with the world on their own account. We are actually pretty much a classic old-school medium that makes an editorial decision about what to publish and what not, and takes responsibility for it. We accept what we like, i.e. find sufficiently interesting, well-founded and convincingly argued. In doing so, we believe we can give good reasons for our decisions, as our academic authors rightfully expect. Nonetheless, though. In the end, what we accept and what we don’t is: our business.

Responsibility. That’s what often gets too little emphasis in the classical liberal definition of property, I think: my „sole and despotic dominion“ over my property, as far as it even exists, is only the reflex of being, and being made, responsible for my property. Your business, society tells me: you have to take care of it so we don’t have to. You keep your business in order. If there are problems with it, they are your problems.

Under the purely classical liberal definition, I would be a bad owner, if not a downright fool. I draw no financial profit from my property of Verfassungsblog – on the contrary. Since I incorporated Verfassungsblog GmbH in 2018, all income from crowdfunding, cooperations and other sources has been sucked up to pay the salaries of those who manage this drastically grown editorial operation every day. I myself haven’t seen a penny in years, to be completely honest. Verfassungsblog will never yield profits, so there wouldn’t be anything to withdraw in the first place. The most I can expect is that we end the year without a loss (a goal we clearly failed last year and well might fail again this year).

I am not disposed to feel all that bad about that, though. In fact, I am enriched by Verfassungsblog in innumerable ways – something that appears immediately obvious if you take two steps back from the narrow liberal concept of property. This is my business, which gives me an esteemed and independent place in the world, and I would argue, in line with Adam Smith, that this is at least as powerful an incentive for entrepreneurial spirit as profit in the narrow sense of the term. I enjoy the mind-blowing privilege of working with the brightest people and engaging with the most exciting issues I could wish for every day. Don’t worry, really. I’m fine. (How I pay for my livelihood? That’s my business.)

Verfassungsblog GmbH is my property. Turns out my property has been non-profit all along. I am fairly confident that we meet the requirements of the German tax law as an entity that is „serving the public good“ (gemeinnützig). „Promotion of science and research“ (§ 52 AO, para. 2 no. 1), „general promotion of democratic government“ (para. 2 no. 24): that is the core of what we do. We will now amend our statutes accordingly and submit an application to the tax authority to have our non-profit status formally recognized.

Council of Europe: Consultancy services needed for support to judicial reform in Serbia

The Council of Europe has launched a call for the provision of consultancy services in Serbia in the area of independence and accountability of the judiciary, internal organisation of the judiciary, judicial training and caselaw harmonisation.

The call for experts is launched under the framework of the Project “Support for the implementation of judicial reform in Serbia”, co-funded by the European Union and the Council of Europe, implemented for a period of three years (2022-2024).

Interested providers are invited to apply by 11 May 2022. https://go.coe.int/QYvQJ

That is why we are not a publishing house in the conventional sense: we do not run a trade. We do not sell stuff. We do not get paid in exchange for products or services, at least as far as our core business is concerned. We do what we do for entirely different reasons and motives, and those who fund us do so not so much in return for the specific benefit we produce for them, but rather so that we can do our work at all. (I don’t mean to lecture publishers about their business model, but to be honest, the commercial logic of selling products and services doesn’t seem to add up for many of them any more, does it? Which is why some of them turn their business into rent-seeking schemes and exploit their intellectual property monopolies and their ownership of author’s and reader’s user data instead. We’ll see how sustainable that will be. It’s not really theirs after all, is it?)

Anyway. From 1 January 2023, if everything goes to plan, we will officially operate as a non-profit corporation under the name of Max Steinbeis Verfassungsblog gGmbH. This will open up a lot of new fundraising options. We can’t go on as terribly underfunded as we are after all, can we. Will this still be my business? Yes. But not exclusively. Never has been, really.

So, a non-profit corporation it will be for us. Elon Musk, if you are interested in this model, do get in touch! If not, at least donate, will you? You’ll get a tax deduction, isn’t that great? (Oh, wait…)

Is it allowed to hold demonstrations for Russia in Germany despite the Ukraine war? Or rather, is it permissible to ban them? PAULA FISCHER examines what the German right of assembly allows and where the limits are.

The climate catastrophe is approaching, but the German government is explicitly making driving cars and burning petrol and producing CO2 cheaper with a „fuel rebate“. Is this in line with the state goal of environmental protection in Article 20a of the Grundgesetz? THOMAS GROSS says: no, it’s not.

Speaking of overheating: the housing market in Germany is in bad shape. STEFAN KLINSKI makes an innovative proposal: restrict market access for companies whose business model drives up rents and land prices by imposing a licensing requirement. Legally, says the author, this would be viable.

Cryptocurrencies are increasingly regulated, including in the EU. JANNIS LENNARTZ takes a look at the impact of ramping up blockchain regulation on fundamental rights. 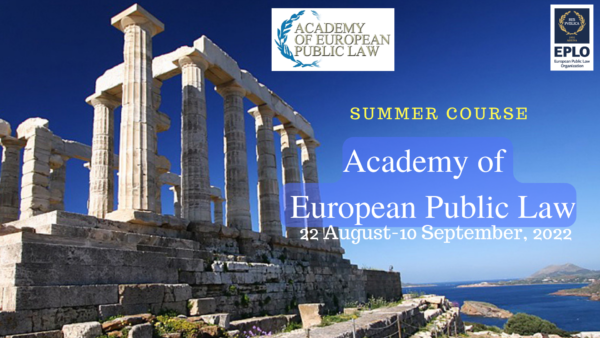 This August, Professor Juli Ponce will focus on “the right to good administration” in law, as well as questions of “nudging” and the use of artificial intelligence. Professor Matteo Gnes will focus on “Legal techniques of legal integration”, norms that drive integration, & methods for harmonisation and standardisation.

In the UK, Boris Johnson is still in office, being fined for his breaches of the Covid regulations he himself created notwithstanding. ALISON YOUNG wonders if „partygate“ is the beginning of the end of the British constitution.

A Polish Supreme Court judge hoisted into office by the Polish government has referred to the ECJ the question of whether the appointment of a judge during the time of the communist dictatorship raises a problem with the independence of the judiciary. ANNA WÓJCIK reports how the ECJ disposed of the matter.

The ECJ wants to create more publicity for its judicial work through livestream broadcasts. ALBERTO ALEMANNO finds this laudable because it breaks the information monopoly of journalistic, legal or other insiders who attend the sessions on site.

In Bulgaria, the parliament has finally abolished the Special Criminal Court and the Special Prosecutor’s Office. RADOSVETA VASSILEVA looks at how the two institutions have damaged the rule of law over the last decade, while still being supported by the European Commission.

Since 2015, EU member states have not really taken their obligations under the Schengen Agreement seriously. The open internal borders, one of the EU’s greatest achievements, have become practically irrelevant in many cases. But now the ECJ has spoken some clear words, which are analysed by JONAS BORNEMANN.

So much for this week. Are you already supporting us on Steady? You do? Thank you very much. You don’t? Why not?