On 18 November 2019, Hong Kong’s Court of First Instance (“CFI”) held that parts of the Emergency Regulations Ordinance (the “Ordinance”), and the Prohibition on Face Covering Regulation (the “Regulation”) enacted pursuant to the Ordinance, violate the territory’s Basic Law – its constitutional instrument. Beijing’s response to the ruling was the equivalent of a temper tantrum. Zang Tiewei, a spokesman for the Legislative Affairs Commission (“LAC”) of the National People’s Congress Standing Committee (“NPCSC”), fulminated that the NPCSC was the only entity that could decide whether Hong Kong laws comply with the Basic Law. In a similar vein, NPCSC deputy Tam Yiu-chung dismissed the CFI’s judgment as “in need of rectification” and threatened an NPCSC interpretation if this did not occur within Hong Kong’s courts.

A threat to “rectify” an unfavourable judgment from a Beijing apparatchik, viewed in isolation, is already an unacceptable attempt to dictate outcomes to the territory’s beleaguered judges. Viewed in light of the CFI’s judgment and Beijing’s lengthy history of undermining the Hong Kong judiciary, Beijing’s latest outbursts amount to nothing less than a declaration of war on the territory’s common law legal system.

What did the CFI actually rule?

The CFI (sitting, unusually, as a panel of two judges), was asked to consider six grounds of challenge (numbered in the judgment 1 through 5B):

(1) The Ordinance amounts to a delegation of general legislative power to the Chief Executive in Council. Such a delegation is inconsistent with the legislature’s role as defined in the Basic Law. Accordingly, the Ordinance as a whole is invalid.

(2) The Ordinance was implicitly repealed by the HK Bill of Rights Ordinance („BORO“) of 1991, which transposed portions of the International Covenant on Civil and Political Rights (“ICCPR”) into Hong Kong law. Alternatively, it was implicitly repealed by Art 39 of the Basic Law (stating that ICCPR provisions previously applied to the territory shall remain in effect).

(3) To the extent that the Ordinance gives general legislative powers to the Chief Executive in Council, the Ordinance violates the “prescribed by law” requirement in Art. 39 of the Basic Law.

(4) Due to the principle of legality, the general language in the Ordinance does not empower the Chief Executive in Council to adopt measures that infringe individual rights outside of emergency situations.

(5A) The provisions of the Regulation imposing a ban on face coverings are a disproportionate restriction of rights guaranteed by the Basic Law.

(5B) The provisions of the Regulation conferring powers on any police officer in relation to face coverings are a disproportionate restriction of rights guaranteed by the Basic Law.

I summarise the CFI’s conclusions on each of Grounds 1, 5A, and 5B below.

Ground 1: The Ordinance was an improper delegation of general legislative power

The CFI explicitly did not consider whether the Ordinance was also unconstitutional insofar as it delegated legislative power during an “occasion of emergency”. Rather, it took pains to state, in paragraph 96, that “we do not wish it to be thought to be our opinion that the Basic Law categorically precludes any emergency powers from being given to the Executive”. This particular distinction mattered because of the circumstances in which the Regulation was drawn up; even as it invoked the Ordinance, the Hong Kong government insisted that there was no state of emergency. This nuance appears to have been lost on Zang: he declared that the decision had “weakened” the administrative power of the Chief Executive.

Ground 5A: The Regulation provisions imposing the substantive ban on face coverings were a disproportionate restriction on rights guaranteed in the Basic Law

The CFI accepted the Government’s contention that there was a legitimate aim behind the substantive ban (namely law enforcement). It also accepted that there was a rational connection between the ban and that aim. However, it concluded that the ban was only a reasonably necessary restriction on fundamental freedoms in connection with unlawful assemblies (which, as the CFI pointed out, by definition could not have been peaceful assemblies: para 151). Insofar as the ban applied to authorised public meetings and processions, or to “unauthorised” assemblies that remained peaceful throughout, the ban was disproportionate (para 166). In reaching that conclusion, the CFI emphasised that:

Ground 5B: The Regulation provisions conferring powers on police officers in relation to face coverings were a disproportionate limit on fundamental rights guaranteed in the Basic Law

Section 5 of the Regulation, in effect, allowed a police officer “to stop any person in any public place who is using a facial covering and to require that person to remove it so that his or her identity may be verified, if the officer reasonably believes the facial covering is likely to prevent identification” (para 171).

After observing that section 5 was extremely broad, the CFI concluded, at paragraph 189:

“There is practically no limit on the circumstances in which the power under that section can be exercised by a police officer, save the requirement that (i) the person is in a public place, and (ii) the facial covering used by that person is reasonably believed by the police officer to be likely to prevent identification.”

It therefore concluded that the section exceeded what was reasonably necessary to achieve the aim of law enforcement.

What the CFI did not find

Beijing’s Tantrums in Context: A Crisis Long in the Making

In light of what the CFI actually decided, Beijing’s responses might well seem even more baffling. I suggest, however, that they are merely the latest escalation in an ongoing campaign to undermine the independence and relevance of the Hong Kong judiciary.

(1) The power of interpretation of this Law shall be vested in the Standing Committee of the National People’s Congress.

(2) The Standing Committee of the National People’s Congress shall authorize the courts of the Hong Kong Special Administrative Region to interpret on their own, in adjudicating cases, the provisions of this Law which are within the limits of the autonomy of the Region.

The Standing Committee of the National People’s Congress shall consult its Committee for the Basic Law of the Hong Kong Special Administrative Region before giving an interpretation of this Law.

The first skirmish took place in 1999, in the Ng Ka Ling right-of-abode litigation. The Court of Final Appeal (“CFA”) determined that Hong Kong courts were empowered under the Basic Law to determine whether other laws were consistent with it – including acts of the NPCSC. This perceived challenge to NPCSC authority generated howls of outrage from cadres and led to a humiliating CFA climbdown framed as a “clarification”. The Hong Kong Government later sought – and the NPCSC granted – a Basic Law “interpretation” effectively nullifying the CFA’s judgment for good measure.

A second battle, in 2005, concerned the length of tenure of replacement Chief Executives. After Tung Chee-hwa resigned from the position in 2005, the question arose as to whether his replacement Donald Tsang would serve out only the remainder of Tung’s term (i.e. 2 years), or a fresh 5-year term. After it became clear that the question would become the subject of judicial review applications in Hong Kong, the NPCSC issued an “interpretation” to dictate its preferred outcome – with the stated purpose of short-circuiting the Hong Kong judicial process.

The third direct clash, in 2016, is relatively well known. After several legislators-elect used their oaths of office as a means of protest, the Hong Kong Government sought to have two of them disqualified from elected office. While a Hong Kong court was seised of the matter, and before it had issued a judgment, the NPCSC delivered its own “interpretation” of the Basic Law – dictating the result to the CFI. Of five “interpretations” the NPCSC has delivered to date, only one has occurred at the behest of a Hong Kong court.

Nor should it be thought that Beijing’s war on Hong Kong’s legal system has been confined to “interpretive” salvos from the NPCSC. Rao Geping, a politically connected academic at Peking University, has suggested that NPCSC “interpretations” become routine. Tian Feilong, a Beihang professor and emerging Party-line “talking head,” penned a column in 2018 castigating Hong Kong’s legal profession for harbouring the “arrogant belief” that the city’s common law was worth preserving. And pro-Beijing politicians have stepped up their attacks on the judiciary – frequently with overtly racist connotations – over the past few years.

Viewed against that background, the NPCSC’s most recent fulminations – complete with an attempt to oust the Hong Kong courts’ ability to review the constitutionality of Hong Kong law – amount to a crisis long in the making. They are not, as former Chief Justice Andrew Li declared, “surprising and alarming”. Alarming they may be. But not entirely surprising.

Other posts about this region:
China, Hong Kong 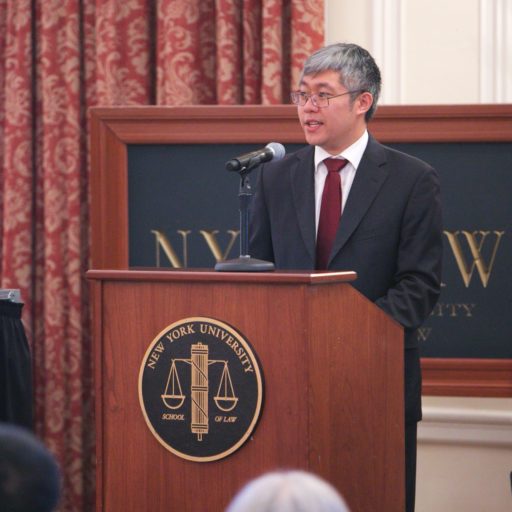 Other posts about this region:
China, Hong Kong No Comments Join the discussion
Go to Top