A German Court went to Peru

It is not very often that an on-site meeting of a German higher regional court makes its way to the front pages of international news media. Yet, the reported visit of judges and court-appointed experts from the OLG Hamm, one of 24 higher regional courts in Germany, has achieved just that when the nine-person group traveled to the Andean city of Huaraz in Peru in late May 2022. This was after all no ordinary visit. They had come to see with their own eyes whether Saúl Luciano Lliuya’s house is threatened by outburst floods from Lake Palcacocha. Floods that, as the Peruvian farmer argues, are caused by melting glaciers due to climate change and thus, ultimately, by German energy company RWE.

The visit constitutes to our knowledge the first time a German court has traveled abroad for an on-site meeting. We argue that this form of “strategic visitation”, similar to strategic litigation, might not result in a judicial breakthrough but holds important symbolic and political significance.

The lawsuit Luciano Lliuya vs. RWE AG, in a true David vs. Goliath fashion, has already made climate litigation history in 2017 when the OLG Hamm decided to declare the claim admissible and enter the evidentiary phase. Luciano Lliuya, a farmer and mountain guide, had filed a claim against RWE in 2015 in a civil lawsuit. 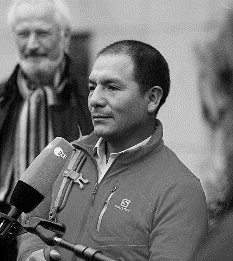 While RWE is not directly involved in Peru, he argues that he suffers indirectly from the consequences of RWE’s business activity. He requested the Court “to determine that the respondent is liable, proportionate to its level of impairment (share of global greenhouse gas emissions), to cover the expenses for appropriate safety precautions in favor of the claimant’s property from a glacial lake outburst flood from Lake Palcacocha.” 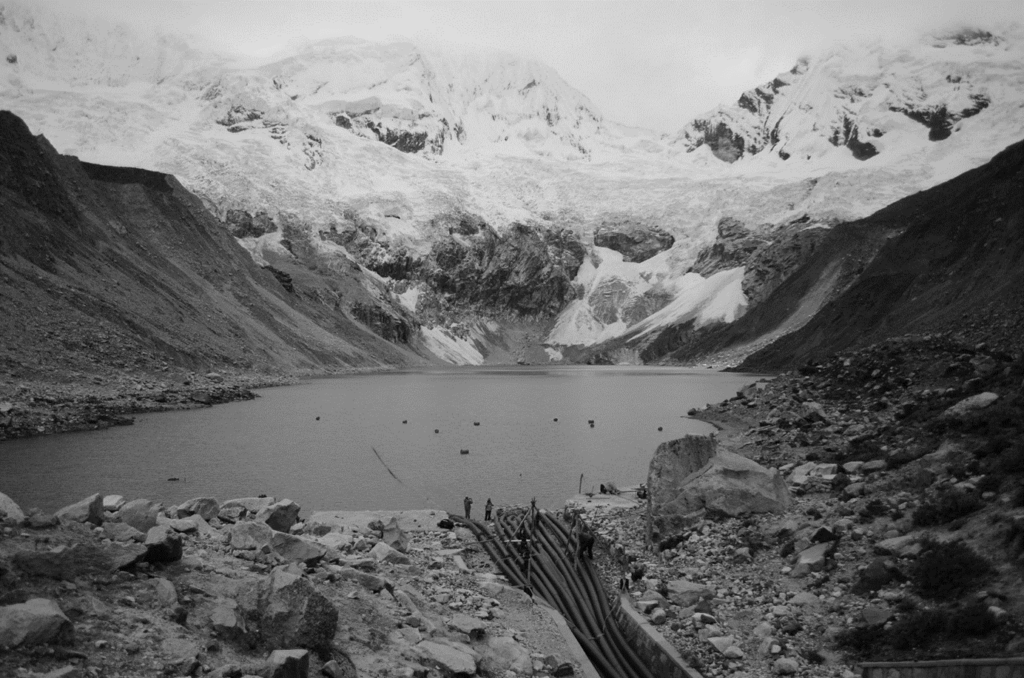 Legally, the indictment is based on §1004 of the German Civil Code which contains a general compensation claim. Luciano Lliuya, supported by the NGO Germanwatch, thus asked the courts to reimburse him as well as the local authorities for mitigation measures that they are bound to incur to protect their houses from future floods. The amount of damages claimed is calculated according to the share of RWE’s contribution to global industrial greenhouse gas emissions: 0.47 percent. As a declaratory judgment, he would thus not receive substantial damages himself but the assurance that RWE contributes 0.47 of the costs required for flood protection in Huaraz.

While the District Court Essen had dismissed his claim, citing the impossibility of effective redress and lack of a linear causal chain between RWE’s business activity and the melting glaciers in Peru, the second-instance court in Hamm has generally affirmed the possibility that a private company can be held responsible for protecting people directly facing the consequences of climate change. Thus, the claim was declared generally admissible and proceeded to the evidentiary phase.

In 2020, in another surprising twist, the Fifth Civil Chamber of the OLG Hamm decided to not only rely on expert witnesses but to undertake an on-site visit to Peru. This sets a historic precedent for Germany, where on-site visits abroad by the judges are almost unheard of, as well as for the rising number of climate change litigations all over the world. Yet, in other regions of the world, on-site visits to alleged victims and affected communities are part and parcel of judicial activity.

International courts have developed a significant practice of on-site visits abroad, mostly in connection to fact-finding. Yet, it has been rare that the judges themselves and not just court-appointed experts are traveling to the respective location. The first visit of the ICJ in 1997 to the Gabčíkovo-Nagymaros Project was chronicled in the American Journal of International Law by later-ICJ President Peter Tomka and Samuel S. Wordsworth.

Marco Benatar argues that while some types of cases such as border and delimitation disputes suit themselves to on-site visits, other in situ inspections raise the risk of a further politicization of the courts as it breaks the alleged distance from the scene and potentially gets embroiled in the political context of a conflict. Naturally, on-site visits also pose significant practical hurdles such as possible security concerns and additional funding needs. 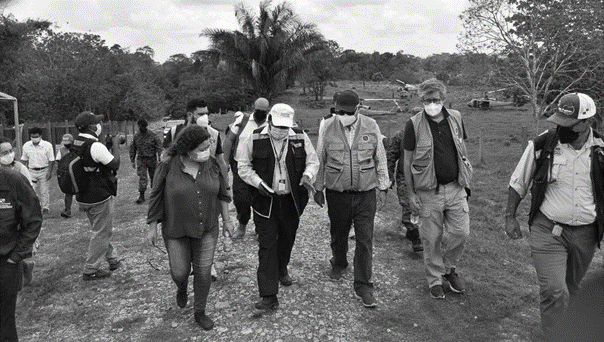 The IACtHR in a recent visit to El Darien, Panamá (2022)
(Photograph: provided by Pablo Saavedra, Executive Secretary of the Court.)

The Inter-American human rights system, spearheaded by the Inter-American Court (IACtHR) and the Inter-American Commission (IACHR), has been the most outspoken advocate of on-site visits in its judicial practice. They have not only adopted regular sessions abroad but also visit individuals and communities in the process of monitoring the compliance with a decision by state authorities. Both human rights bodies employ those visits strategically as part of their judicial communication to increase their legitimacy. Pablo Saavedra, who became the Executive Secretary of the IACtHR in 2004, has developed the fundamental understanding of the Court as “una corte de toga y mochila” [a Court with robes and backpack]:

“The [backpack] is a symbol of going to the countries, of visiting the countries, going to the people, to have more interaction. The object of this was to have more legitimacy, because it is very easy to have legitimacy when you always talk with the same people. Our main problem was that no one knew about the court. Even today, the people who live in the Americas don’t know about the Court. For this reason, we decided to start having public sessions and hearings in the countries. This was very important. I believe we were the first tribunal to start having sessions in the countries, which included open public hearings, interactions with the universities and civil society in the states we visited. This changed a lot, especially for the visibility of the court.” (as cited in Steininger, p. 17)

However, this does not mean that this overhaul of public outreach was without challenges and criticism, even among the bench:

“This was a massive change. Before, we only had the public hearings here in the courtroom in Costa Rica where at maximum only around 100 people can attend. Now it is open to all of the people in all of the countries and this changed a lot. It had a huge impact. As always in a court, there are always some more traditional and conservative voices. For instance, when we started to visit the countries, some judges thought that this would look like tourism, that they would be criticized for that. They favoured a more traditional court, not a tourist court. And later there was the discussion on the media court. They feared that the court was too fancy, that it would look like a comedy. I said, no one does it, we should start doing that. The traveling court, and the media court changed a lot for the proximity of the judges with the reality and also with the media and the new kind of communication.” (as cited in Steininger, p. 17)

The direct engagement with alleged victims through on-site visits became a pillar of the people-centered approach of the Inter-American human rights bodies. It is reflected in its communication principles as well as its practices, in traditional press, and multi-media: videos, pictures, infographics, documentaries, and podcasts, among others.

Justices and Law Clerks from the Constitutional Court of Colombia in a Public Hearing in the middle of the Amazon jungle (2014) (Photograph: provided by the author, Law Clerk Sandra Trujillo.)

This proactive approach has also been adopted by constitutional courts in the region, most prominently the Constitutional Court of Colombia. In 30 years of existence of the Colombian Constitutional Court, the chance of holding public hearings on high-impact issues, as well as several in situ inspections by Justices and Law Clerks throughout the country to remote regions such as the Darien Gap in the territories of indigenous peoples, the Atrato River in the Pacific, or the Amazon, have contributed to the Court’s ability to develop the transformative role of its jurisprudence. The visit of the OLG Hamm and the resulting media coverage might trigger more domestic courts to imitate such proximity practices which have so far mainly been deployed by tribunals from the so-called Global South.

In the Inter-American context, the OLG Hamm might take inspiration from another powerful precedent concerning climate change and the protection of communities, specifically, the landmark Advisory Opinion on the Environment and Human Rights (Advisory Opinion OC-23/17). The main point of this instrument is that the guarantee of rights is intrinsically linked to the right to a healthy environment. Additionally, it develops an important point about accountability beyond geographic location criteria for States and private actors, in Banda’s understanding of the case law of the Court, „…if pollution can travel across the border, so can legal responsibility“.

From the perspective of the relations of the Global North with the Global South, we see at least two general readings. On the one hand, it is possible to state that the precedent of strategic visitation of a German court to an isolated Peruvian community is positive insofar as it: (i) has already put the issue on the news agenda; (ii) generates hope in the community directly affected by the visit of „alien“ judges in contrast of the lack of responsibility of domestic authorities; and (iii) demonstrates the importance of holding a large corporation from the “north” accountable for the impact of its actions felt by individuals and communities all over the world.

On the other hand, there is of course ample criticism that could be levied against such visits. One possible negative reading might interpret those actions as a type of intervention of a foreign jurisdiction of a powerful country such as Germany in a comparatively weak state like Peru. A kind of neo-colonialism with judicial flavor or a precedent that only boils down to the lip service of a few privileged German judges, given the impossibility for many judges in the world to visit the thousands of cases that are discussed in their chambers about the acts of corporations abroad or even in the own country.

Yet, in our interconnected globalized world, contemporary global law has to reflect the blurring of borders. In an age of impending climate catastrophe, the impact of greenhouse gas emissions by industries on the livelihood of many people all over the world is not an isolated butterfly effect but rests on mountains of evidence. Mainstreaming climate concerns into law also requires a heightened sensibility in domestic law. In cases like the Palcacocha lake, the traditional notions of “sovereignty” and preconceptions of “authority” can be replaced by global values of human rights and the environment which have been developed in the Inter-American system. The precedent set by the OLG Hamm after this visit to Peru may go beyond the symbolic and influence other tribunals. Will other jurisdictions dare to follow this path?

Silvia Steininger Silvia Steininger, LL.M., M.A., is a Research Fellow at the Max Planck Institute for Comparative Public Law and International Law in the team of Professor Armin von Bogdandy. 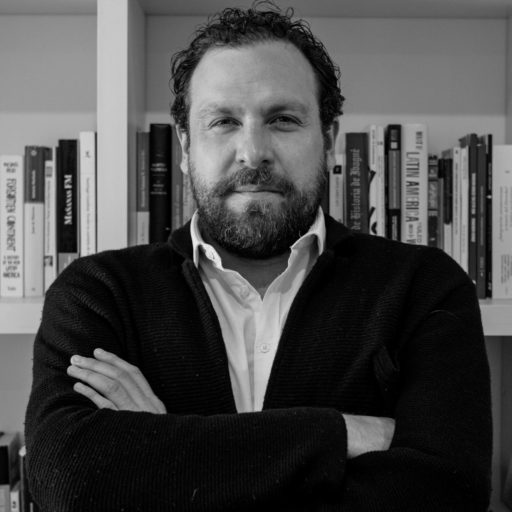