It is not yet clear how the poker game between Barcelona and Madrid will end, at least in the long run. But one party can already be identified as a loser: the Spanish Constitutional Court. No matter who you root for in this exceptionally confusing and dangerous conflict – the constitutional court in Madrid apparently has already suffered a loss of authority from which it will not recover quickly. 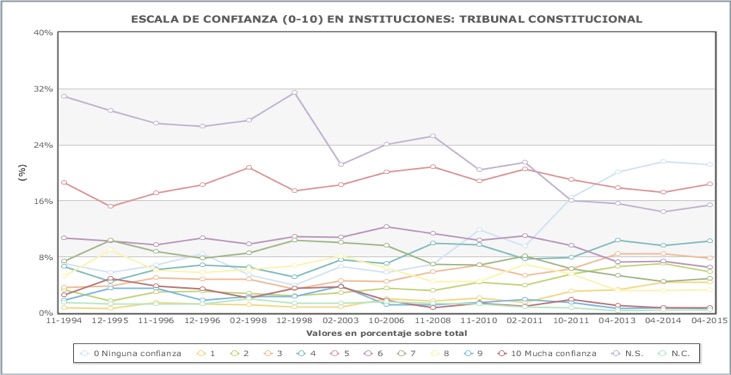 Not only the moderate and ardent supporters of the Constitutional Court have changed their opinion during this period, but also and above all the indifferent: in 1998, a third responded with „I don’t know“, today only one sixth. Two decades ago, you could get by just fine without having much of an opinion on the Constitutional Court. Not any more today, apparently.

It must be said, though, that this has also been a period of severe economic crisis in Spain. Confidence in all state institutions has fallen accordingly, not only in the Constitutional Court. However, if I am not mistaken the Court’s particular fever curve seems to reflect something else as well: the increasing politicisation of the court during the escalating Catalan quest for independence. In 2006, the conservative Partido Popular, then in the opposition, filed a suit against the statute of autonomy of the region of Catalonia, which was negotiated and adopted by the then socialist majority. For four years, the Constitutional Court struggled with alternating attempts by both political camps to manipulate its composition in one direction or another. In 2010, the judgment was finally passed, unanimously and on the surface a compromise: the Estatut was not overturned as a whole, but in many important details it was, and above all, the term „Catalan nation“ as used in the preamble was denied any normative value. Days later, millions of angry Catalans took to the streets. In 2015, the Constitutional Court struck down as unconstitutional not only official but also informal votes on Catalan independence: the constitutional requirement of indissoluble national unity prohibits not just the answer but already the question of Catalan independence. In the same year, the government empowered the Constitutional Court to enforce itself its judgments against Catalan disobedience, impose fines, impeach officials and annul acts contrary to its judgments. The court becomes its own enforcer. It no longer just adjudicates, it executes. It no longer exercises just judicial authority, it exercises power.

This seems to me not the least important aspect of the current Spanish tragedy. The invention of constitutional courts used to be the pride and joy of European constitutionalism. It was the key to success in the transition to democracy not just in Germany in 1949 and in Spain in 1978, but also in South Africa, in Central and Eastern Europe and in Latin America. After a revolution, in a deeply divided society, it takes more than courage and good will to embark on the adventure of democracy. Those who end up in a minority must be able to trust that they will not be raped and robbed by the majority if the cede power to them. How could they be reasonably expected to do that? The best way to inspire the minority with this trust was to install a strong, impartial constitutional court that will check those in political power without exerting power itself.

That trust might be lost now in Spain, and that is awful. However, this affair seems to me instructive beyond the specific tragedy of Spain.

Firstly, the politicisation of constitutional justice is not a purely Spanish phenomenon, nor is the judicialisation of politics. Instead of dealing with the Catalan desire for self-determination as a political problem, the Partido Popular just had to point to the court. Look, it is not us, it is the constitution! A political problem in search of a solution turned into a legal question in search of an answer, and that was to be given by the Constitutional Court. While the way in which the Constitutional Court was turned into a political actor was particularly blatant in the Spanish case, in principle that sort of thing happens everywhere where constitutional jurisdiction exists. Particularly when the courts are put in charge of preserving the „unity of the nation“ (or, for that matter, „constitutional identity“).

Secondly: that constitutional courts will restrict the power of the majority for democracy’s sake is no longer accepted as a matter of course any more, not just in Spain, but in many post-revolutional societies in Europe and beyond. The (actual or self-proclaimed) majority sees no reason to inspire the minority with trust – quite the contrary: They want to teach those scoundrels finally a lesson, they want to settle the scores with their erstwhile oppressors, and they consider it their democratic birthright to do just that. That is what they are in the majority for, after all. They want unbridled power, and the constitution should better get out of their way. In Catalonia, this majoritarian sentiment takes the rather passive-agressive form of exit, whereas in other parts of Europe it comes in less diffident ways, as Turkish, Hungarian and Polish judges and opposition can testify.

Until now, we have been used to seeing constitutional courts as a kind of natural opponent of autocrats. But perhaps this is no longer true in these times of stealth authoritarianism. Orbán must be very fond of his Hungarian Constitutional Court for all the many constitution-shaping ends he can use it for. Kaczyński, too. And Erdoğan, as well.

Speaking of Hungary: the „Lex CEU“, which threatens foreign private universities in Hungary in general and the constitutionalist stronghold CEU in particular with closure, has caused a lot of international concern. On October 11th, the deadline by which the required state treaties had to be signed has expired – but two days after, the Minister of Justice suddenly announced that it would extended by one year. RENATA UITZ, CEU’s most shining light of comparative constitutionalism, notes that this is a remarkably cavalier way of handling the rule of law even for FIDESZ standards, her own relief for the unexpected delay notwithstanding. (Correction: Rénata notified me of the fact that András Sájo is back since May, which makes the light of comparative constitutionalism at CEU downright blinding now.)

Back to Catalonia: KARLO BASTA has witnessed the civil wars during the disintegration of Yugoslavia at first hand and can therefore judge if the occasionally heard comparisons to Spain are well founded or not. Conclusion: Not so much, for the time being. Not yet, that is.

In Britain, there have been new speculations as to whether there is still any chance of walking away from the Art. 50 notification of Brexit after all. CORMAC MAC AMHLAIGH examines if that would be possible under European law. With rather discouraging results.

In Switzerland, a new popular initiative is currently pending, driven by the right-wing populist SVP party, which, if successful, would force the state to breach the European Convention on Human Rights and other treaties of international law on a regular basis. STEFAN SCHLEGEL describes the curious fact that this initiative has effects before it is even adopted.

Speaking of violations of international law:  NULA FREI and CONSTANTIN HRUSCHKA highlight the numerous legal and political problems that accompany the EU’s attempts to stop the influx of refugees via the Mediterranean in Niger, Chad and Libya.

The German state of Mecklenburg-West Pomerania has so far received fairly moderate attention on these pages, but now the state constitutional court in Greifswald has issued an interesting verdict: to reserve the office of equal opportunities commissioner only for women is, in the view of the north-east German guardians of the constitution, no prohibited discrimination. BERIT VÖLZMANN explains what that is about.

Plenty of extraordinarily worthwhile reads about Catalonia this week. A selection: ANNE PETERS wonders how well international law, with its familiar categories in terms of referenda, still manages to cope with a phenomenon such as Catalonia. HENRI LABAYLE draws a bleak picture for those Catalans who hope to have a future as an independent country within the EU. MARTIN SCHEININ denies Catalonia’s right to unilaterally break away from Spain, but affirms Catalans‘ right to be heard with this desire. MIGUEL ÁNGEL PRESNO LINERA examines Catalan President Carles Puigdemont’s statement to declare independence and then suspend it for the time being, measured against Catalonia’s own laws adopted specifically for this purpose where nothing of that sort can be found.

France has been in a state of emergency for 23 months, and anyone who has forgotten or gotten used to that disturbing fact should read JEAN PHILIPPE DEROSIER’s powerful „No“.

CRISTINA SAENZ PEREZ describes how difficult judicial and police cooperation between the EU and the UK will be after Brexit.

JACK SHELDON has suggestions as to what powers a future English parliament should have.

DIRK VOORHOOF pays tribute to a new ruling by the European Court of Human Rights, which ensures journalistic sources robust protection, and so does ROSELINE LETTERON.

Next week we will have to deal with the fallout of the elections in Austria which will probably bring another proto-Orbánite coalition to power, and with the upcoming next Independist event in Northern Italy, where Lombardians and Venetoans (is that how you call them?) will express their regional will in another round of referenda next Sunday. So, no danger of tedium there, at least.

My thanks go to Eloisa del Pino for helping me find the facts about confidence in the Spanish Constitutional Court, and to Argelia Queralt for getting me in touch with her.

Take care, and all the best,