„Thanks for submitting your application. We’ve reviewed your account and unfortunately at this time it isn’t eligible for access to the branded content tool. It’s our policy not to discuss the standards we use in evaluating accounts for access to the branded content tool. This decision doesn’t limit your ability to grow and develop your account and followers. Thanks again for taking the time to contact us.“

Ok, let’s see. Facebook regulates. It sets rules, demands their observance and sanctions their non-observance. Facebook grants and denies access: I get this tool or I don’t, a distinction is made. My window of access to Facebook itself is one mouse click, I can’t explain anything, I can’t even ask a question. The request is rejected, and not only the reasons, but also the standard of assessment are not communicated to me. I’ll never even know the criteria according to which I get or get not discriminated. And that, in turn, is communicated to me. Quite explicitly. Just so that I don’t get that wrong. It’s intentional. „It’s our policy.“

Facebook is a gigantic, global public space with currently about 2.3 billion so-called users who produce a gigantic amount of publicity every day. But these users have no share in the public space they create. They’re not citizens, they’re not stakeholders in a res publica when they use Facebook… well: they are users, that’s what they are. Users of a technology. Users of a service that Facebook offers them. Their relationship with Facebook is not a public one: Facebook is a private company and they are its customers, but what services Facebook offers and to whom, and to whom not – that’s up to them alone. Facebook sets „community standards“, but that only means that Facebook reserves the right to withhold its services from people they consider bad for business, and who that will be and how that gets determined and by which procedures and which criteria, in short: how Facebook justifies itself, that remains undisclosed, and as a matter of course, too. It’s private. A matter of Privatautonomie, as German civil law likes to call situations where the right to justification doesn’t count.

German constitutional law, and that’s one of it’s features I really love about it, is rather strict about defending the public space. In one of it’s key decisions back in the 1950s, the Federal Constitutional Court defined freedom of opinion as the „constituent per se“ of the liberal democratic order of the state, as „it alone permits that constant intellectual interaction, the conflict of opinion, which is its vital element“. In recent years, the FCC has made several increasingly daring inroads into Privatautonomie to defend that vital element from drying up in a fenced-in desert of privatized public space. Anyone who creates a public space cannot simply invoke private autonomy and treat the reasons and criteria according to which he decides and differentiates as his private matter for which he mustn’t be held accountable by anyone.

I don’t think I will simply accept Facebook’s „policy not to discuss the standards they use“. I cannot not use Facebook, much as I’d want to, most of all because I use Facebook as a means of publication: A quarter of all readers access Verfassungsblog via Facebook and rely on Facebook to tell them what’s going on on Verfassungsblog. So, I’m sorry, but when Facebook makes decisions about me and my accesses, at least I want to know what the criteria are.

On Verfassungsblog, we have started an online symposium this week, together with KARIN LOEVY from the NYU School of Law, on „an Israel of, for and by the Jewish People“: It is about the controversial new law that defines Israel as the nation state exclusively of the Jewish people. TAMAR HOSTOVSKY BRANDES argues that the law does threefold damage: as a pretext for discrimination, as a violation of the rights of the Arab minority, and as an obstacle to the development of social solidarity in Israel. Further contributions by KARIN LOEVY, HASSAN JABAREEN, ROB HOSWE and others will follow in the coming days.

In Germany, and not only there, the UN Migration Pact was one of the big issues this week, not least thanks to the excitement that the AfD is spreading on the occasion of the imminent adoption of the pact in December. DANA SCHMALZ took a closer look at the motion of the AfD against Germany’s accession and finds there not only the „little surprising rejection of migration …, but also an extremely crude understanding of international law and state sovereignty“.

DANIEL SARMIENTO is pleased with the ECJ’s Bauer ruling on direct effect of the right to paid leave in the Charter of Fundamental Rights, „probably the most important set of judgments on fundamental rights in a long time“.

MARCO ANTONIO SIMONELLI, against the background of the discussion about the Polish „judicial reform“, raises the problem of the way in which the judges and Advocates General at the European Court of Justice are elected to their offices. 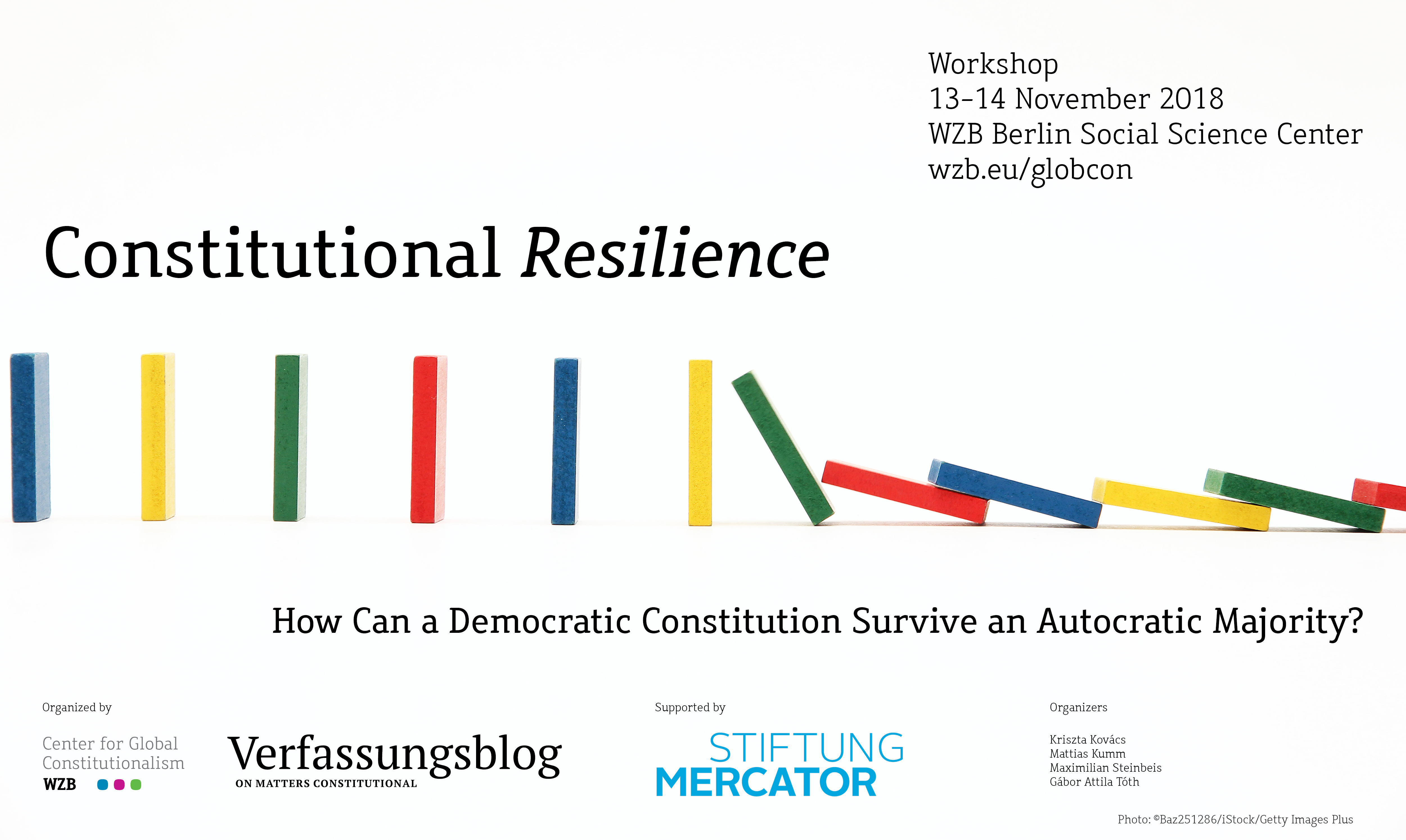 At last, some big news: This week, our workshop „Constitutional Resilience: How can a Democratic Constitution Survive an Autocratic Majority?“ will happen in Berlin. We bring some of the most experienced experts from Hungary and Poland in the hardest hit areas – judges‘ elections, media supervision, electoral law, opposition rights, etc. – into conversation with corresponding experts from Germany to find out how well the German legal and constitutional order would be armed against assaults like those that have happened in Poland and Hungary. The results will be published in an online symposium here on the blog. Stay tuned!