Enemies of the People?

We rub our eyes in surprise: In the motherland of parliamentary democracy, a court decides that it is not for Her Majesty’s Government to exert its Royal Prerogative and push the Brexit button all by itself, but that the representation of the People has to be involved, the sovereign Parliament of the United Kingdom. What, one would think, is democratic if not this?

Anyone who believes that has reckoned without the British tabloid press and the hardline brexiteers among the Tory deputies: 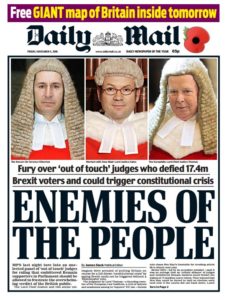 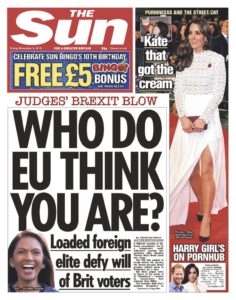 The Judges V the people https://t.co/fZLVcfTCfH

Unelected judges calling the shots. This is precisely why we voted out. Power to the people! https://t.co/TocS1bJnEM

Enemies of the People: Joseph Stalin would have been wildly amused by this way of putting things…

Leaving aside such 30s reminiscences, it seems to me too simple to reduce this phenomenon solely to the disgracefulness of the British boulevard press and Tory backbenchers. There is something more fundamental going on. Not only in the United Kingdom. But in the entire Western democratic constitutional space.

In Poland, we can currently witness live and in color how precarious the position of the judiciary can quickly become when it claims the authority to take constitutional questions out of the hand of political majorities and to answer them by means of legal reasoning in court proceedings. It can be branded at any time as a political actor, judges as members of an imagined or even an real elite, serving entrenched power structures in order to keep the true will of the people unheard and unfulfilled. Against this genuinely political accusation it is very hard for a judge to defend herself. Anyone who tries, as the President of the Polish Constitutional Tribunal Andrzej Rzepliński has done with admirable courage and enormous stamina, just digs himself deeper and deeper into the hole that his opponents have shoveled for him. With every interview, with every public speech, he only confirms what his opponents claim anyway: the man fights a fight, and it is not a legal one. It is all just politics.

In the US, the debate about judicial activism and the politicization of the Supreme Court has been going on for many decades. The judiciary tries to shield itself by adhering to judicial self-restraint and declaring itself incompetent to adjudicate on large parts of politics via the political question doctrine. But this goes only so far. Everybody knows which judges are liberal and which conservative, and if it weren’t for Justice Kennedy who votes sometimes with one, sometimes with the other camp, one could more often than not calculate with one’s fingers how politically hotly contested disputes will end. This has been the case for a long time and has not improved the Supreme Court’s standing at home or abroad.

Recently, though, the debate has assumed a new quality. Republican senators, including „moderate“ heavyweights such as John McCain, have announced that they will block any nomination by Hillary Clinton if she becomes president. They rather let the seat of Justice Antonin Scalia, who died a year ago, remain unoccupied for a half-decade or even longer than to allow a Democrat president to add another judge to the bench, thus shifting the majority in the liberal direction. Some in the US even demand to confirm no new judges at all and to starve the court down from nine to six judges. As long as Scalia’s position is unoccupied no side has a majority, and the court is in many cases structurally prevented from setting precedents. Which does not bother the Republican hardliners much, on the contrary: if one is against judicial activism, what is not to like if the Supreme Court simply shuts up for a while?

In Germany, being devoted to the Federal Constitutional Court is, so to speak, part of our constitutional DNA. But we too are not immune to gene mutations. When the left-wing party leader Katja Kipping recently, after the Karlsruhe court declined to stop CETA, publicly started driveling about „class justice„, she swiftly backpedaled. But that was alright. We have got the message.

The Second Senate of the Federal Constitutional Court itself has set out on a dangerous tightrope walk when it offered itself during the Eurocrisis as a forum for popular discontent, thus raising unfulfillable expectations of its ability to answer politically contested questions ex cathedra.

It is not just the (constitutional) judiciary as an institution that is being undercut, though. It is constitutionalism itself. And along with it the confidence that will be permanently possible to safeguard peace and freedom through constitutional law.

This conviction is under attack. All over the world. People are frustrated and disillusioned and find, mostly quite rightly, that the political system does not deliver what it is supposed to deliver, that too many feedback loops are built into it to make the powerful more powerful and the powerless increasingly powerless. The legal ties are to blame, they say. Anti-discrimination laws and supranational regulations, say the one. Free trade agreements and investment protection rules, say the others. You cannot do anything at all any more without those lawyers showing up and saying that it is forbidden and/or expensive.

For those having or aspiring to political power, whether it is Donald Trump, Theresa May or Jarosław Kaczyński, this „will of the people“ is a huge reservoir of political capital: the people wants less legal ties? Be my guest! Especially if the subject of this will, if not legally constructed, becomes all the more politically malleable. Whoever sets the agenda, who formulates the referendum questions, who feeds informations to the electorate controls to a large extent what the „will of the people“ will actually turn out to be. This way, not only judicial but also democratic institutions are much easier swept aside when they become inconvenient: who needs a parliament when the people has already spoken?

The democratic constitutional state is a magnificent castle, full of battlements and towers, with strong walls. For many ages it has withstood the „will of the people“ as defined by the respective interested parties.

Even in a supposedly thoroughly stable democracy like Great Britain it can happen – perhaps it has already happened – that we wake up one day and notice: Where the night before stood a magnificent castle, we find in the morning only a pile of wet sand.