The analysis of Germany’s strategic restraint to date is indeed, as Isabelle Ley has written in her lead article for this blog symposium, of double importance for German arms export policy:

First, what has been and continues to be apparent here is a strategic reticence in the sense of a strategy deficit and, above all, a deficit in the culture of debate – both with regard to parliament and to the general public and the media. In this respect, a repositioning of the Federal Republic’s arms export policy seems necessary. This must be embedded in a foreign, security and defense policy strategy in which the most important security risks, interests and values with options for action, priorities and approaches to the resulting political measures are worked out. Further, the strategy must be discussed in diverse forums and then substantiated and defined both politically and legally.

Additionally – and here lies the difference to Germany’s general military restraint – Germany, and all German governments in recent years and decades, have supplied war weapons and other armaments to all regions of the world on a very substantial scale, without such a basis for discussion, strategy or action. According to the most recent SIPRI figures, Germany ranks fourth in the global arms trade for 2016-2020, with a share of 5.5%, behind the USA, the Russian Federation and France, but ahead of the People’s Republic of China. Third countries, i.e. those that are not part of NATO, a NATO equivalent or the EU, accounted for up to four-fifths of the war weapons licenses issued for export since 2014, including torture states such as Egypt and human rights violators such as Saudi Arabia, the United Arab Emirates, Algeria or Qatar, i.e. all countries with a „very poor human rights situation“.

By far the largest recipient of German military equipment last year was Egypt: Germany issued export licenses for state-of-the-art Iris-T frigates and air defense systems worth 4.34 billion euros. At the same time, Egypt, which is ruled by a quasi-dictatorial regime, has come under fire for human rights violations and its involvement in the conflicts in Yemen and Libya. In comparison, recent arms export decisions are particularly striking: First, Germany refused to supply any weapons to Ukraine – a democratic country – which is in a situation of self-defense according to Article 51 of the UN Charter. Only later did Germany then offered 5,000 helmets and some old weapons from the GDR army stocks, along with some more modern portable anti-aircraft weapons. 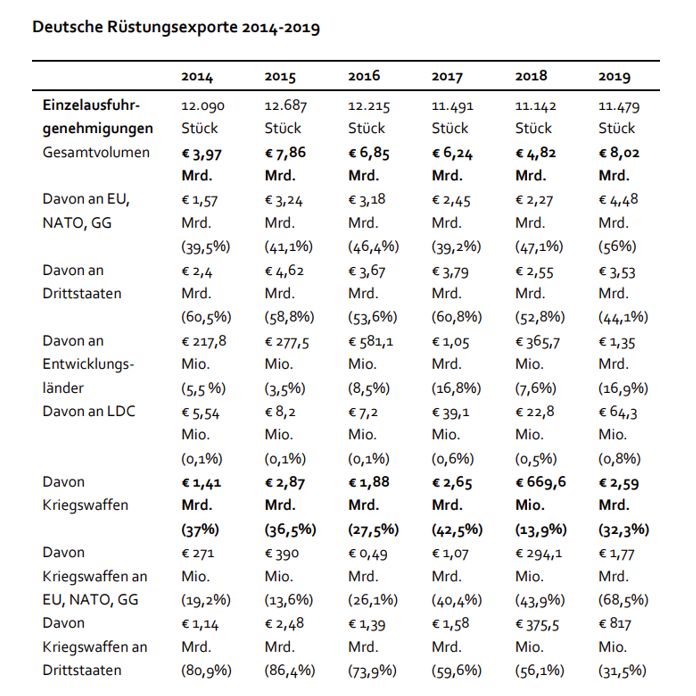 The question arises to which extent this arms export practice is subject to laws, regulations or other rules and whether these are indeed being adhered to.

German arms export policy is essentially governed by rules of varying binding force and precision at the level of EU law (Council Common Position 2008/944/CFSP of December 8, 2008, defining common rules governing exports of military technology and equipment), the German constitution (Article 26 (2) of the Basic Law), other national law (the War Weapons Control Act, the Foreign Trade and Payments Act, the Foreign Trade and Payments Ordinance) and the „Political Principles of the Federal Government for the Export of War Weapons and Other Military Equipment“.

Against the backdrop of Germany’s experiences of the previous world wars, the constitution already stipulates that licenses are required for manufacturing, transporting and distributing war weapons, and this includes all foreign trade on the matter. The War Weapons Act and the AWG, as implementation laws, in turn specify the licensing requirement. However, they lack specificity as to which recipient states war weapons and other military equipment may be exported to. In quite general terms, it is stipulated that licenses are to be denied if there is a risk of an act disturbing the peace, a war of aggression or a violation of the obligations of the Federal Republic of Germany under international law (Section 6 (3) War Weapons Act). In addition, arms exports may be restricted in order to safeguard essential security interests of the Federal Republic, to prevent a disturbance of the peaceful coexistence of nations or a significant disruption of foreign relations, or to safeguard the public order or security of the Federal Republic or another EU member state (Section 4 (1) AWG).

The 2008 EU CFSP Joint Statement sets out eight specific criteria with which member states must assess export licenses. These range from compliance with international obligations on human rights and international humanitarian law, the internal situation in the country of final destination, the maintenance of peace in a region and the risk of diversion of the military equipment received to compatibility with the economic situation of the recipient country. However, as measures of the Common Foreign and Security Policy, these criteria are in principle exempt from judicial review by European courts (Art. 24 para. 1 subpara. 2 last sentence TEU, Art. 275 para. 1 TFEU). According to Article 29 TEU, Member States must only „ensure that their national policies conform to the positions of the Union.“

Regarding the destination of arms deliveries, the aforementioned „Political Principles“ are more specific: According to these, the export of war weapons and other military equipment is not to be restricted if the destination is a EU member, NATO or NATO-equivalent state, unless a restriction is required in individual cases for special political reasons (item II.1.). Exports to third countries, i.e. all other countries, are „handled restrictively“ (III.1.). The export of war weapons subject to licensing under the War Weapons Control Act and the Foreign Trade and Payments Act is not even subject to licensing except in special cases involving particular foreign and security policy interests of the Federal Republic of Germany (Section III.2.).

If we now look at Germany’s arms export practice against the backdrop of these rules, the findings are clear, as shown in the table presented at the beginning: The export of war weapons to third countries, some of which are highly troublesome, has become the rule rather than the exception, contrary to the abstract legal requirements and self-imposed principles. For example, according to calculations by the Bonn International Center for Conversion (BICC), in 2019, Germany approved arms exports to 55 states whose human rights situation were classified as “very poor”. In the last nine days of its term in office alone, the Merkel government approved exports worth 4.91 billion euros. The non-binding nature and/or lack of precision and explicit target orientation of the aforementioned legal and political requirements mean that they are in no way able to curb the generous licensing practice and the arms exports on which it is based. On the contrary, they ultimately favor a case-by-case, expansive ad hoc practice that escapes political and legal control.

Daring to be more binding

In light of the above, the legal specification of the provisions regarding the reservation of authorization – in accordance with the coalition agreement – is urgently needed. Here, too, we need an effective national contribution to countering the trend toward the deprivation of rights in international relations, which is currently becoming apparent once again in connection with the Russian Federation’s war of aggression against Ukraine.

In order to specify or expand the criteria for refusing to grant a permit for arms exportation, the  Common Position of the European Union provides a suitable basis. The provisions of the EU Common Position already apply to the member states but are currently hardly subject to judicial review at the European level (Article 24(1)(2), last sentence, TEU, Article 275(1) TFEU). For the War Weapons Act, the decisive binding provision in Section 6 (3) could look like this:

(3) The permit shall be refused,

if there is a danger

and if the recipient country is neither a member of the EU, nor of NATO, nor a NATO-equivalent country.

In general, the people potentially affected by arms export decisions are not entitled to sue in Germany, and the people potentially interested in Germany are not affected parties in the legal sense. Therefore, we require a collective action option as in other areas of law, e.g. environmental law. This is not about limiting the federal government’s political decision-making power and transferring it to the courts, but rather about the possibility of judicial review of compliance with existing regulations and procedures. To this end, the War Weapons Act (KrWaffKontrG) could introduce a possibility for collective action. A corresponding provision for other military equipment should be anchored in the AWG.

Preventing offshoring by spin-offs or shareholdings

In order to circumvent German arms export regulations, German arms companies are increasingly relocating the production and/or development of armaments abroad. Subsidiaries there then export to third countries without German authorities being able to intervene. In order to prevent this, an enabling basis for ordinances to control and prohibit the acquisition or establishment of foreign defense companies by German firms should be established in foreign trade law.

Technical assistance provided by German defense companies to defense manufacturers abroad has so far only been subject to approval in connection with NBC weapons, corresponding missiles and in the case of embargoed countries. There is a legal loophole here that allows German defense companies to support the development of defense industrial capacities abroad, thus internationalizing their production and circumventing German arms export controls. This loophole must be urgently closed by extending the existing authorization reservations in the Foreign Trade and Payments Ordinance (AWV) to all military equipment and countries.

Verification of the whereabouts of military equipment supplied abroad has so far only worked inadequately and only in respect to a few countries and certain weapon systems. In principle, this should always be possible, not least in the interests of domestic suppliers, in order to be better able to verify and sanction the unauthorized transfer of military equipment.

In light of the repeated pleas of various federal governments that Germany’s arms export policy be restrictive, the question arises as to whether and, if so, which „hidden agenda“ has shaped the concrete licensing decisions to date. At any rate, the political interest in an explicit, comprehensible arms export strategy embedded in a coherent foreign, security and defense policy strategy is obvious. Against this backdrop, GKKE even calls for an explicit obligation to justify arms export decisions in the Foreign Trade and Payments Ordinance.

So far, there is no such provision. There has not even been a significant debate on the strategic nature of the reasons for arms export licenses in the central forum for this, the German Bundestag. The case law of the German Federal Constitutional Court (GFCC) has probably also contributed to this. As a result, its rulings make foreign and security policy decisions a policy field exclusively subject to the executive assessment prerogative of the federal government. The 2014 ruling of the Federal Constitutional Court on the information claims of members of the Bundestag established very narrow limits on parliamentary information rights from the constitutional principle of separation of powers and from private and governmental need for secrecy.

Against this backdrop, too, a broad debate aimed at an explicit arms export strategy for Germany as part of a comprehensive overall foreign, security and defense policy strategy is essential. This follows not least from the statutory provision (Gesetzesvorbehalt) of the Basic Law on war weapons in Article 26 (2) of the Basic Law and from the parliamentary reservation for any out-of-area deployment of the Bundeswehr in the Parliamentary Participation Act in implementation of the GFCC decision of 12 June 1994 (BVerfGE 90,286). If, in general, a decision by the German Bundestag is required for the latter, this also applies a fortiori to the export of war weapons, as is taken for granted, for example, by the Swedish Parliament with its corresponding cross-party advisory body. A purely administrative Federal Security Council decision is no alternative. The Swedish council is even consulted ex ante before the government decides on arms exports and makes its decision in full knowledge of the government’s strategic position. Perhaps this would constitute a suitable model for Germany also. 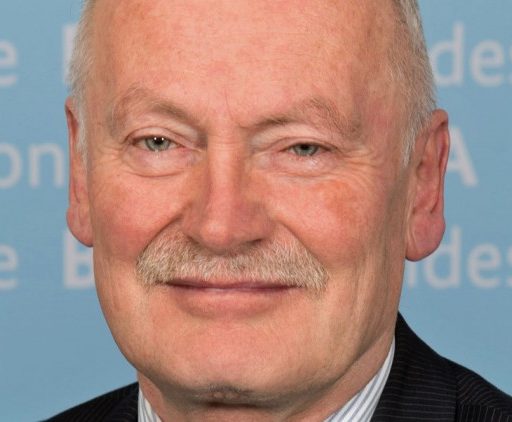