Genocide Denial, Power-Sharing and the Freedom of Expression in Bosnia and Herzegovina

In July 2021, the High Representative for Bosnia and Herzegovina Valentin Inzko used the last days of his term to criminalize genocide denial by decree. This move has sparked a prolonged political crisis which seems to be coming to a bizarre end that is nothing but a horse-trading at the expense of the freedom of expression.

Boycotting the Ban of Genocide Denial

Denial and trivialization of the genocide committed in Srebrenica in the summer of 1995 is still widespread in Bosnia and Herzegovina. The genocide was confirmed by the ICTY and the ICJ and its recognition is an important element of post-conflict re-building of the society and a pre-condition for a peaceful coexistence between the previously conflicted parties – Serbs and Bosniaks. In response to the High Representative’s decree, however, the political parties of the Republika Srpska, one of the entities of Bosnia and Herzegovina, have been boycotting the institutions of Bosnia and Herzegovina.

But there is a solution on the table: Milorad Dodik, the Serbian member of the Presidency of Bosnia and Herzegovina, leader of the party SNSD and informal leader of the Bosnian Serbs, has agreed to keep the genocide denial clause under the condition that another criminalization is introduced. He proposed to ban the use of the attribute “genocidal” when used to describe a state, entity or canton in Bosnia and Herzegovina. The crime shall be punishable by imprisonment of up to five years. Bakir Izetbegović, the president of the biggest Bosniak political party supports this proposal under the condition that it leads to the end of the boycott.

A horse-trade of this sort is not an unfamiliar concept in Bosnia and Herzegovina. Ever since the Dayton Accords, which were architected by the American administration and ended the war in 1995, the idea of a compromise between the leaders of the three ethnic groups Bosniaks, Serbs and Croats as the paramount modus operandi has been promoted by the international community. Given the lack of flexibility of the ethnic leaders, the Office of the High Representative has used its „Bonn Powers“ to jump-start the functioning of the state – which is what lead to the boycott in the first place. What makes this trade-off stand out, however, is the absolute lack of consideration for the value of freedom of expression in a democratic society – a value whose construction is one of the purported aims of all actors, domestic and international.

(Not) a Big Deal: The Compromise and Free Speech

With the sensitivity of the topic in question, the High Representative Inzko showed consideration for the freedom of expression as a democratic value when criminalizing genocide denial. Thus, not all genocide denial is punishable – merely when the denial is carried out in a manner likely to incite to violence or hatred against such a group or a member of such a group. This means that free speech can be restricted only if it reaches the standard of potential real-life damage.

Turning to the other side of the deal, very little attention is paid to the implications for the fundamental right to freedom of expression. Republika Srpska, the entity inhabited almost exclusively by Serbs has often been called genocidal by members of the Bosniak public. This has been perceived as an insult worthy of blocking the institutions. In fact, Republika Srpska already enactedthis very prohibition just after Inzko’s decree. The relevant section of the Penal code is called “Violation of the reputation of the Republika Srpska and its peoples”, and it determines that if Republika Srpska is marked as an aggressor or genocidal creation or its people as aggressor or genocidal, the perpetrator shall be punished by imprisonment for a term between six months and five years.

The proposal designed to end the boycott, however, is slightly different. SNSD has put forward “The Law on the Prohibition of the Abuse of the Term Genocide” in an urgent procedure, which means that the bill can only be adopted in the proposed form, amendments are out of question. This ultimatum by the SNSD follows the logic of the law enacted in Republika Srpska, but incorporates several important changes.

First off, it is not an amendment of the Penal Code of Bosnia and Herzegovina, but a separate law. Supposedly, by amending the existing Penal Code, the prohibition of genocide denial would be tacitly approved. The proposed law states that an individual that “speaks, writes, or in another way makes public texts, pictures or any other representation of ideas about genocide, by belittling or exposing to public mockery” the various federal entities – Bosnia and Herzegovina, Republika Srpska, the Federation of Bosnia and Herzegovina or the Brčko Distrikt (a territory not a part of any of the entities) – as well as groups or individuals based on their “race, skin color, religion, origin, state, national or ethnic affiliation in a way which could incite violence or hatred towards the aforementioned”, is to be punished by a minimum of six months and a maximum of five years imprisonment.

How do these prohibitions – the existing one in the Republika Srpska and the proposed one on federal level – fare with general standards of freedom of expression? The author of this text could not find a contemporary democratic regime with a similar prohibition.

The proposed law seeks to protect the reputation of the Republika Srpska and its people. It falls under the scope of defamation law, which has been decriminalized in Bosnia and Herzegovina almost 20 years ago, with protection of freedom of expression being one of the main reasons to do so. Individuals still may raise private suits, so the balance is adequate. Feelings of a collective, however, are not worthy of restricting the freedom of expression. In a democratic system, the actions or omissions of the government must be subject to close scrutiny, not only by legislative and judicial authorities, but also by the press and public opinion. The idea of criminalizing (collective) defamation would be a significant step back bringing to mind the verbal crimes of communist times.

The use of potentially insulting epithets is a form of a value judgement, and the line between free speech and defamation should be carefully drawn, if at all. It is highly questionable, if the wording of the proposed draft of the SNSD manages to do so. How are “belittling or exposing to mockery” to be differentiated from other, acceptable forms of value judgment? Why would we punish these two forms of expression anyway? Exposing a state or one of its entities to public mockery seems like a normal part of everyday political debate – at least of satire. Additionally, the proposed law bans „representations of ideas of genocide” – a highly abstract concept which may lead to legal uncertainty.

Balancing the reputation of the state’s entities and the individual’s right to freedom of expression should be a no-brainer. The state’s interest is the prevention of violence or hatred. This goal is already attended to by general hate speech provisions. In contrast, prohibiting an individual from commenting on the history of an entity may lead up to tabooing the topic of genocide in Bosnia and Herzegovina. That kind of atmosphere is in stark contrast to the core principles of contemporary freedom of expression, such as the concepts of marketplace of ideas and robust public debate. The ECHR has given special deference to free speech pertaining to matters of public interest. Debating a genocide in a post-conflict society is a matter of public interest par excellence.

Furthermore, the provision in Republika Srpska’s law features no additional conditions such as incitement to violence or hatred, thus allowing for a wide limitation of the freedom of expression in private and in public. The proposal at the level of Bosnia and Herzegovina seems to take into account these deficiencies and limits the scope of the law enacted earlier in the Republika Srpska by asking for public expression which may incite violence or hatred. However, this whitewashing does not cover up for the above mentioned: the free speech concerns regarding the content of the prohibition should result in a prima facie rejection of the proposed law.

What are the Long-Term Consequences of Short-Term Pragmatism?

The overall political climate in Bosnia and Herzegovina might prevent such a reasonable response of the Parliamentary Assembly. The boycott has been happening simultaneously with another crisis developing between Croats and Bosniaks regarding the electoral reform. The double crisis, coming in a time of an ever-stronger presence of Russia and China in the region, sounded the alarm for the EU and the US which have engaged in a diplomatic offensive reconciling the three ethnic groups.

Unfortunately, the approach of this reconciliation follows the matrix established during and after the war – the participants of the negotiations are not the members of Bosnia and Herzegovina’s institutions, but the leaders of the biggest ethnic political parties: Milorad Dodik, Bakir Izetbegović and Dragan Covic. This ethnic chieftain approach, as I call it, has served to deepen the divide between the ethnic groups.

So far, the mission civilisatrice by the EU’s Angelina Eichhorst and Matthew Palmer is silent regarding this bizarre horse-trading at the expense of the freedom of expression. Does the Latin maxim qui tacet consentire videtur apply here? In the decades after the war, the Western mediators have shown that the basic functionality of the institutions of Bosnia and Herzegovina is the main priority to which everything is to be sacrificed, including the decades of discrimination towards Jews, Roma and „others”, and even the three ethnic groups at times.

The proposed horse trading is yet to materialize. The fact that there was neither a reaction to the law enacted in the Republika Srpska nor to this rotten compromise is worrisome. Putting the consensus of ethnic leaders before any other value leads Bosnia and Herzegovina further astray from the Western democratic ideals. Seemingly, the fundamental right of freedom of expression, the proverbial oxygen of democracy, is sacrificed next. The long-term consequences of this short-term pragmatism are yet to be seen, but any reasons for optimism are hard to come by. 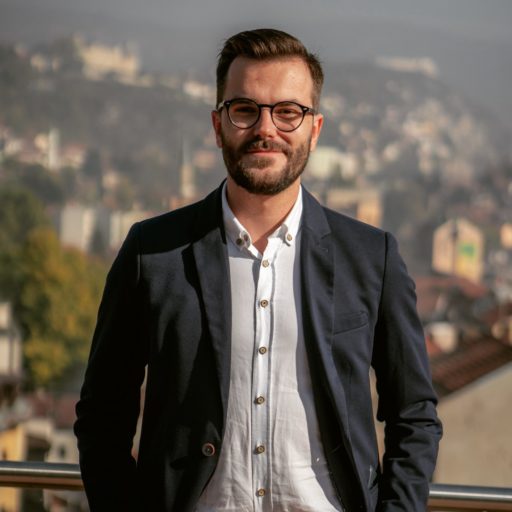 Tahir Herenda Tahir Herenda is a Teaching and Research Assistant at the Faculty of Law of University of Sarajevo, where he is also a PhD candidate at the Department for Legal History and Comparative Law.

Other posts about this region:
Bosnien und Herzegowina No Comments Join the discussion
Go to Top