Wanting to Know the Facts

If I, as a journalist, want to reveal juicy facts about a person that were previously unknown to the public, I must have contacted that person beforehand and confronted him or her with these facts. This is one of the most elementary principles of my profession. To refrain from doing so is an absolute no-no. The temptation may be great not to complicate the supposedly already crystal-clear scoop by making an unpleasant phone call – but it is imperative to resist it. Not only for reasons of fairness. Also in one’s own interest. Then I know more and can defend myself better if things get nasty afterwards. After all, I don’t want to have to be ashamed of what I’ve written.

The week before last, the Frankfurter Allgemeine Zeitung landed such a scoop in the context of the abominable anti-Semitism scandal at the Documenta exhibition in Kassel: The writer Emily Dische-Becker, who is currently being dragged through the newspapers (€) as Documenta’s alleged „anti-Semitism advisor“, had a dubious past, FAZ staff reporter Lena Bopp revealed. According to her, Dische-Becker had worked as recently as 2015 for a Lebanese newspaper in Beirut that supported Hizbullah, the terrorist organisation committed to the destruction of Israel. „Connected to Hizbullah“ (Der Hizbullah verbunden) was the headline (meanwhile the online version toned it down a bit to „Writing close to Hizbullah“, Schreiben in Hizbullah-Nähe). Wow! Close to BDS, that’s what many had assumed about those left-wing critics of Israel anyway. But a terror organization like Hizbullah!

None of this is true, it seems. Emily Dische-Becker, as she immediately clarified on Twitter, had co-authored a single article in Beirut for the Al-Akhbar newspaper in 2006, at the time the only left-wing, independent newspaper in Lebanon. From 2010 to 2012, she worked part-time for the newspaper’s English-language internet portal – which was editorially independent of the Arabic-language newspaper – as a researcher for Wikileaks, for which Al-Akhbar was the partner for the Arab region. It was only in 2011 that a new editor-in-chief took office and, after the uprising in Syria against Assad, turned the paper into a Hizbullah mouthpiece. This had been preceded by a fierce internal editorial conflict over the fact that the paper was becoming increasingly partisan and uncritical of Hizbullah and Assad. As a result, Dische-Becker quit and left Beirut in 2012 altogether, disappointed by the splintering of the Lebanese left into Assad opponents and supporters.

Emily Dische-Becker, who, by the way, is Jewish herself (which Lena Bopp was „of course“ aware of, according to FAZ, but failed to mention in her article), has explained this to me in detail on the phone, and the key parts of this version of events seems to me to be well documented by affidavits from the Al-Akhbar editorial staff at the time. Had FAZ staffer Lena Bopp asked Emily Dische-Becker for a comment, she would have found this out, too. She hasn’t.

Distance & Convergence: re:constituting Democracy and the Rule of Law in Europe

Public conference on 8-9 September in Berlin

Join experts from academia and practice to look at the impact of recent and upcoming EU democracy and rule of law developments. Participate in interactive sessions designed by re:constitution Fellows, alumni and partners and explore the ‘democracy and RoL marketplace’.

Shouldn’t Lena Bopp be in trouble now? So one would think. To a newspaper like FAZ, as it says on its website under „Our self-image“ referring to its founders back in 1949, „‚the truth of the facts must be sacred. And it should always do justice to those who disagree with it‘. Today, some 70 years later,“ the self-description continues, „these principles still apply“. I asked the FAZ press office about the principle of contacting people before reporting on them. The answer: „The Frankfurter Allgemeine Zeitung has stood for quality journalism for decades. It takes journalistic due diligence seriously. The F.A.Z. editorial staff is committed to the rules of journalistic professionalism.“ Just to be sure, I had also asked the managing director of the German Press Council, Roman Portnack, to confirm that asking the other side to comment is part of the standards of good journalistic practice. Of course it is.

Meanwhile however, Lena Bopp’s boss, feuilleton Herausgeber Jürgen Kaube, instead of reprimanding his staffer, has taken up the pen himself. „Manifestly untrue“ (€) is the title of his article, and this does not refer at all to Lena Bopp’s text, which he rather defends in the most paternal way, but again to the positions of Emily Dische-Becker and her defenders. A popular move nowadays. It is called victim blaming, I think.

Now, one could say: Come on, there are worse things, emotions run high when it comes to anti-Semitism, a tactical foul like that is not so unusual.

I don’t find that so easy. Norms like the requirement to hear the other side are much more than mere professional standards of good practice. They have a constitutional dimension. They contribute to the possibility of agreeing on a common reality in a free, democratic and diverse society, and thus to keeping this free, democratic and diverse society possible in the first place. They are part of the condition of the possibility to disagree about this reality, its description and its assessment, and to argue about it with each other. That is why the press, just like the judiciary, arts, research, enjoys special constitutional protection. Journalistic professional ethics are not, of course, a constitutional norm in the formal sense of the term, but they are part of the web of conventions and rules of fairness that every written or unwritten democratic constitution relies on to thrive.

The problem is not so much that Lena Bopp’s article is full of half-truths and falsehoods. That’s bad enough, but well, stuff happens. The problem is that she doesn’t seem to care one bit about what actually happened in Beirut ten years ago. Not even now.

After Lena Bopp did not respond to my request for a telephone call, I sent her an email with six questions. Why, I wanted to know, does she call the article from 2006, the only one Dische-Becker ever wrote for Al-Akhbar, an „exception“? Exception of what? Why does she call it „curious“ that this the only article that can be found on the internet? I was answered by an assistant on behalf of the head of the FAZ feuilleton editorial team, with the following information: „To find only one article by someone who has worked in a responsible editorial position over a long period of time is curious.“ Oh, is it? So, the conclusion is simply the premise now? If that’s how you operate, the whole world must seem extremely curious to you all the time, of course. But then again, if you find a thing curious, wouldn’t you be a bit more… curious about it? Wouldn’t you want to know? Wouldn’t you perhaps, you know: ask? No one from FAZ, according to Emily Dische-Becker, has ever contacted her, to this day.

I also asked directly whether Lena Bopp feels obliged by the norm of giving people she reports on the opportunity to comment, and, if so, according to what criteria she decided to make an exception here. Instead of an answer came a „counter-question: Is there a norm at Verfassungsblog to contact and listen to people whose actions are being reported on (e.g. Tiziana Chiusi, Ursula von der Leyen, Georg Thiel) in advance?“ That I can answer very quickly. If we take part in public debates on the basis of undisputed and commonly known facts (Chiusi), comment on a politician’s policies (von der Leyen) or reflect on a government office on the occasion of a public hearing (Thiel), then the answer is obviously no, because what would be the point? If, on the other hand, we reveal facts about someone, which is not what we usually do on VB and happens rather rarely (here, to give one example), then I would answer the question emphatically in the affirmative. Okay, I don’t want to be arrogant, mistakes happen all the time, and should we have committed one or two over the years, then may the Annette Schavan demon haunt us. But at least we would be extremely embarrassed. Whereas the heads of the FAZ feuilleton editorial team, it seems, simply don’t give a damn at all.

Max Planck Law connects ten Institutes in Germany and Luxembourg to form one of the world’s largest frameworks for doctoral and postdoctoral training in law.

Find out more about our academic opportunities here and keep up-to-date with our numerous activities, including courses open to the public, by subscribing to our newsletter here.

My friend and brother-in-law Stephan Detjen has compared the matter to the McCarthy era, much to the chagrin of Jürgen Kaube. There is some truth in that. But even more so, a more contemporary US phenomenon seems to suggest itself as a standard of comparison: Trump. Tucker Carlson. Fox News.

That’s where we are now, folks. The irony that we, a digital medium with the word „blog“ in its name, are wringing our hands over this moral decay, while the erstwhile leading conservative newspaper of the Federal Republic is conducting itself like the worst Twitter troll, has not escaped me.

Is the planned decriminalization of cannabis use in Germany in line with European and international law? Kai Ambos thinks it does, whereas Robin Hofmann disagreed and referred to Art. 71(2) Schengen Agreement and the EU’s accession to the Vienna Drug Convention of 1988. KAI AMBOS‘ reply: The arguments put forward fall short of European law and do not acknowledge the dominance of international law agreements.

Michał Stambulski and Karol Muszyński’s critique of what they believe to be the shortcomings of “doctrinal constitutionalism” of scholars attacking the rule of law policy in Poland are critizised in turn by DARREN HARVEY, who argues that the authors fail to define what they mean by this term and to offer any alternative solutions to a rule of law crisis that the authors themselves readily acknowledge to be a problem.

Earlier this month, the UK High Court quietly issued a landmark decision, which will strongly impact the course of UK climate policy over the coming decades. CATHERINE HIGHAM and JOANA SETZER believe the decision to be an important victory in the context of a growing number of cases around the world which demonstrate the critical role of the law and the courts in creating accountability for climate action.
++++++++++Advertisement++++++++ 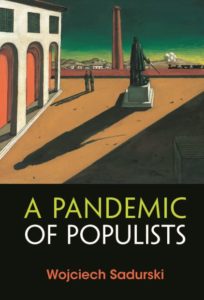 A Pandemic of Populists – Wojciech Sadurski

Over the last decade, the world has watched in shock as populists swept to power in free elections. From Manila to Warsaw, Brasilia to Budapest, the populist tide has shattered illusions of an inexorable march to liberal democracy. The book highlights the variety of constitutional (and anti-constitutional) strategies that populists in power have used to undermine the institutional fabric of democracy. Wojciech Sadurski offers a vibrant, contemporary account of modern populisms and, significantly, considers what we can do to fight back. Paperback discount price: £18.39, $ 23.99.

That’s all for this week. Our series of summer specials written by other authors than me is just interrupted, not finished yet; I will return to my weekly editorial duty later in August.

See you then, stay healthy and safe, thanks for your support, and all the best!