How to Strengthen Democratic Accountability

Regulation (EU) 2019/1896 gave the Parliament a range of tools affording it oversight of the agency’s activities. Recital 116 and Article 106(2) of the Regulation provide that Frontex must report on its activities to the European Parliament, Council, and Commission ‘to the fullest extent’. This right to information covers operational information on a periodical basis (see for instance Articles 32(11), 65(1) 50(7)). Moreover, in its cooperation with third countries, Parliament must be informed about the content and parties foreseen for a working arrangement prior to its conclusion (Article 76(4)), about the conclusion itself (Article 68(2)), and about Frontex’ activities in that framework (Article 73(7)). Additionally, parliamentary input is guaranteed for the annual programming document (Article 100(k) and Article 102(1)) and for the European multiannual strategic policy on integrated border management (Articles 8(4) and Article 29(2)). The Regulation (recital 107 and Article 104(7)) allows for the invitation of an expert of the Parliament to the meetings of the Management Board (MB). This is now being carried out by a member of the secretariat of the Frontex Scrutiny Working Group.

Moreover, the Parliament is involved in the appointment of the executive director. Article 107(2) guarantees the right to have a hearing with the candidates put forward by the Commission and to recommend the appointment of one of the candidates. Though the recommendation is not binding, the MB has to justify the way in which it has taken it into account. Section IV (Articles 115 and 116) provides for financial accountability to the Parliament and Council. The discharge procedure is Parliament’s most important tool for checking how public funds have been spent and EU projects carried out.

The Bellingcat/Lighthouse report as a catalyst for better control

Next to the oral exchanges of views in the LIBE Committee, Frontex was subject to control by the Schengen Scrutiny Group – a working group of the LIBE Committee- which primarily focused on Member States’ compliance with the Schengen Border Code. However, the October 2020 revelations by a consortium of investigative journalists on Frontex’ complicity with pushbacks, made the LIBE committee decide to better equip the Parliament for its oversight role. In January 2021, it established the Frontex Scrutiny Working Group (FSWG) to monitor all aspects of the functioning of the agency, including compliance with fundamental rights. Its first task was to investigate within four months if the Agency was aware of fundamental rights violations and how it acted upon this knowledge, and to what extent it was actively taking part in pushbacks. This inquiry included internal management, procedures for reporting, and the handling of complaints. In its final report, presented mid-July 2021 with an annex, the FSWG concluded that ‘the Agency found evidence in support of allegations of fundamental rights violations in Member States with which it had a joint operation, but failed to address and follow-up on these violations promptly, vigilantly and effectively. As a result, Frontex did not prevent these violations, nor reduced the risk of future fundamental rights violations.’

The FSWG drew this conclusion from a series of ’serious shortcomings‘ it found in the management and governance of the Agency. It was shocking to notice that the Executive Director completely disregarded all opinions and recommendations from the Fundamental Rights Officer (FRO), including seven expressions of concern about fundamental rights related situations,  inter alia related to Frontex’ operations in Hungary and Evros (footnote 36 in the parliamentary report has listed the recommendations which were not responded to). Moreover, the Executive Director refrained from any response to external reports about fundamental rights violations from authoritative bodies like UN, Council of Europe or national Ombudsmen, and sometimes seven denied that they were sent to him. Some serious incidents reports indicating pushbacks by the Greek authorities, were deliberately ‘re-classified’: this precluded the FRO to handle the reports. Examinations of signals of wrongful acts were superficial, oftentimes closed after the host Member State had simply denied the allegation. The FSWG concluded that the procedures for internal and external signals and complaints were not effective and that the internal culture contributed to ignoring or even covering up human rights violations. Apart from highlighting the destructive role of the Executive Director, the FSWG emphasized that the MB had failed to take its responsibility to ensure compliance with the Regulation. It recommended a more proactive role of the MB and urged the Member States and the European Commission to step up their efforts to ensure that the agency’s border surveillance activities go hand in hand with adequately preventing and combatting fundamental rights violations.

The FSWG also drew lessons for its own scrutiny role. It found that the Parliament before it started its inquiry, was not adequately informed by Frontex about its activities and evaluations. To the extent that information was shared, its confidential nature seriously hampered the actual democratic control. The inquiry even revealed that on crucial fundamental rights cases, the Executive Director had informed the Parliament incorrectly. The FSWG’ final Report – at footnote 48- lists a number of these false statements, apparently meant to mislead the Parliament. The FSWG realized it had to diversify its sources and limit its dependence from the Executive Director. It urged the MB to enable the FRO and Consultative Forum (CF) to share their opinions and recommendations with the Parliament, which is currently impeded by confidentiality rules. The Working Group also requested the FRO and the CF to report back on their activities to the European Parliament and to alert the MB (and if needed the Parliament and the Commission) when their independence is at risk. It invited the Council to discuss how to improve the scrutiny role of both Parliament and Council, and requested the Commission to step up its information sharing with the Parliament in order to strengthen and guarantee democratic oversight. But the FSWG also emphasised that the Parliament itself must make full use of its competences. Two risk-factors need to be acknowledged. First the overwhelming workload and ‘new crises’ distracting from a permanent scrutiny of Frontex, and second the increasing politicisation around the Agency, which affects the objectivity and persistence necessary to ensure that the Parliament exercises its scrutiny role in a serious and integer way.

Public scrutiny as a driver for parliamentary scrutiny

These risk-factors make external attention and public pressure indispensable, which is illustrated by the parliamentary inquiry. The public pressure in the aftermath of revelations by investigative journalists and NGOs made the Parliament fulfill its tasks and hold the Agency accountable. This is why the FSWG also urges the Agency to increase its transparency and to ensure that documents like serious incident reports, reports on the use of force, and individual complaints are only classified as restricted if necessary. The report also reiterates its resolution calling upon Frontex to refrain from seeking to recover the (excessively high) costs of external lawyers from applicants in court cases based on access to information requests.  The call from the LIBE Committee to disclose the OLAF report, on its investigation of Frontex, which led to the resignation of the Executive Director, intended to enable democratic accountability but also to increase public scrutiny.

Putting money where the mouth is: the budgetary control

The parliamentary inquiry has immediately triggered the use of its prerogatives. In April 2021, the Parliament’s plenary decided for the first time to postpone granting discharge to Frontex in respect of the implementation of its budget for the financial year 2019 and the closure of its accounts. In October 2021, MEPs agreed to close Frontex’ accounts but asked for part of next year’s budget to be frozen, and make the availability dependent on the fulfillment of a number of recommendations in the FSWG report. In May 2022, in the aftermath of the findings by OLAF on attempts of the Executive Director to cover the up human rights violations, the Parliament refused to grant discharge to the Agency over the year 2020 as well. It cited, as reasons behind the decision, a failure to fulfill the conditions set out in Parliament’s previous discharge report, as well as the findings by OLAF, presented in the CONT Committee. MEPs point to the fact that they had not seen the full OLAF report and thus were unable to take a well-informed decision to grant discharge. Furthermore, the Parliament recalled that the reported violations in Greece were not addressed and the operations in Hungary were continued in spite of the ruling by the Court of Justice that return operations in Hungary were incompatible with EU law. Again, these arguments were drawn from the FSWG report.

Everything under control now?

The revelations on Frontex’ involvement in pushbacks proved to be a key trigger for the Parliament to effectively hold Frontex accountable. It is an essential duty of the MEPs now to maintain this role and push the Council and Commission to fulfill their tasks since respect of European legality is also part of the very idea of rule of law, to which the EU is committed.  Especially given the sensitiveness of the Agency’s working area, and the fundamental rights related to it, democratic accountability needs to be exercised publicly. That makes transparency a core ingredient for democratic accountability, which requires Frontex to move towards greater openness, also in light of the new mandate of the Agency, entailing the possibility to use service weapons. Public scrutiny, enabled by transparency, investigative journalism, and informed opinions, feeds the democratic debate on border control and fundamental rights, which is intrinsically linked to the democratic accountability of Frontex. In order to bring public scrutiny closer to the citizens, national parliaments can and should step up their involvement as well. National governments have their own responsibility to take human rights-compliant decisions related to their position in the Management Board of Frontex, the deployment of staff in Frontex operations and their bilateral support border control activities at the external borders. Recently, the Belgium federal parliament gave an encouraging example by taking positions and demanding clarifications from its government. It is high time that in a joint effort the European Parliament and national parliaments give meaning to Article 112 of the Frontex Regulation, which provides for a cooperation model to exercise their scrutiny role more effectively. Such cooperation does not necessarily mirror the joint parliamentary scrutiny as provided in Article 51 of the EUROPOL Regulation; most important is the awareness of a joint responsibility for democratic scrutiny of Frontex, sincere cooperation and the political readiness to make full use of their respective mandates.

Tineke Strik was the rapporteur of the final report by the Frontex Scrutiny Working Group, of July 2021. 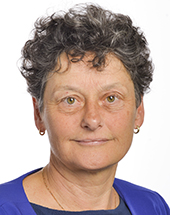 Tineke Strik Tineke Strik is a member of the European Parliament for the Greens/EFA group, and professor of Citizenship and Migration Law at Radboud University. She was the rapporteur of the final report by the Frontex Scrutiny Working Group, of July 2021.