The crisis erupted unexpectedly and disrupted the summer calm of the Greek political landscape at the end of June, when the leader of PASOK-KINAL (third biggest party in the Parliament) and member of the European Parliament Nikos Androulakis found evidence of an attempt to infect his cellphone with the illegal spyware called Predator. Scrutiny by the European Parliament’s services revealed a suspect link associated with the program, which grants the hacker full and constant access to the target’s mobile phone. The politician had received a text message on September 21, 2021, inviting him to follow the link, which he did not do. Mr Androulakis filed a complaint with the Supreme Court Prosecutors’ Office claiming that an unknown party or parties had attempted to tap his cellphone during the leadership race in the ranks of the socialist party last year (September 2021).

The “Predator case” remains to be investigated by the Greek and the European authorities (the journalist Thanasis Koukakis was also targeted). The event that finally triggered the political turmoil, however, was another one. In the beginning of August, a committee of ADAE (Hellenic Authority for Communication Security and Privacy) requested and obtained information on the telephone connection from the provider of Mr Androulakis. It emerged that the National Intelligence Service had submitted an application to lift the secrecy on Androulakis’ mobile phone for reasons of national security. Simply put, Mr Androulakis was tapped for three months (during his campaign for the socialist party elections, until December 2021), according to the ordinary procedure prescribed by law, namely following the official order of the Prosecutor in charge of dealing with these requests from EYP. This exact judicial order, whose motives and justification are still unclear and unknown to the public, coincides chronologically with the failed attempt to intercept his mobile phone with the Predator spyware.

After the Prime Minister Kyriakos Mitsotakis was informed on the case, the Prime Minister’s general secretary Grigoris Dimitriadis (responsible for EYP, which was placed under the control of the Prime Minister’s Office, according to law nο. 4622/2019) and the EYP chief Panagiotis Kontoleon, appointed by the government, were asked to resign. The Prime Minister declared that he was unaware of the surveillance, which was “lawful but mistaken” and “politically unacceptable” and therefore “should never have been allowed”. The President of the Hellenic Republic Katerina Sakellaropoulou has also intervened and accentuated the need for an immediate and complete investigation of the case, taking into account its great importance for democracy and the rule of law. Τhe largest opposition parties SYRIZA and PASOK-KINAL denounced a flagrant violation of the law and pointed to the major responsibility both of the Government and personally of the Prime Minister, speaking of a democratic backsliding.

The Androulakis case not only challenged and altered the Greek political agenda, but also provoked substantial concerns about the protection of the right to secrecy of communications and in a wider sense the quality of rule of law in Greece.

Article 19 par. 1 of the Greek Constitution provides that “1. Secrecy of letters and all other forms of free correspondence or communication shall be absolutely inviolable. The guaranties under which the judicial authority shall not be bound by this secrecy for reasons of national security or for the purpose of investigating especially serious crimes, shall be specified by law”. The “absolute” protection of the right portrays its fundamental value in a democratic society, given its strong connection with personal autonomy and private life. Hence, the Constitution allows two – and only two – restrictions on the confidentiality: for national security reasons and for the penal investigation, detection and prosecution of serious crimes, defined exhaustively by the law. These exceptions shall be strictly interpreted by legal agents so as not to distort or reverse the rule-exception anatomy of the constitutional provision.

Furthermore, according to article 19 par. 2 of the Greek Constitution, the confidentiality of communications is guaranteed by an Independent Authority. Specifically, law no. 3115/2003 and presidential decree no. 40/2005 have established ADAE. The latter supervises the lawful interception and access to communications data procedure and is also in charge of controlling the security of communications in the publicly available electronic communications networks and services. Consequently, the constitutional and institutional framework, complemented with article 8 of the European Convention on Human Rights and article 7 of the Charter of Fundamental Rights of the European Union, aims at the highest level of protection for this right. In addition, every restriction for reasons of national security or for the investigation of a serious crime must comply with the principle of proportionality (article 25 par. 1 of the Constitution, article 1 of presidential decree no. 40/2005). However, the Androulakis case has exposed the conflict of the existing legislative framework (law no. 2225/1994) with the Constitution, the ECHR and the Charter of Fundamental Rights of the EU, alongside with the de facto abuse of power from EYP.

Violating the rule of law

The main law about the confidentiality of communications is law no. 2225/1994. The law does not define “national security” or specify the exact circumstances of surveillance. Constitutional theory has interpreted the vague concept of “national security” as the protection of the country from external threats, which is not to be extended and confounded with the internal “public order”. When public authorities request the waiver of confidentiality for the purpose of verifying crimes, the judicial order (of the Judicial Council) should include the suspect’s name, address and the judge’s reasoning. In contrast, the name of the person and the underlying reasons for the surveillance are not mentioned in the order for national security, issued within the extremely short time-framework of 24 hours. Furthermore, there is no time limit regarding the duration of the abovementioned judicial order, renewed indefinitely by the Prosecutor of the Court of Appeals.

The limited and urgent deadline, the absence of justification and the potentially excessive period of the lift of secrecy provide insufficient, to say the least, safeguards in terms or necessity and proportionality. Effective judicial scrutiny is also foreclosed. On an institutional level, the National Intelligence Service is supervised by a public Prosecutor, specially appointed to the service and responsible for the orders. This “in house” judicial authority with one Prosecutor in charge (law no. 4531/2018) has been criticized for jeopardizing judicial impartiality and transparency.

Last but not least, a provision included in law no. 4790/2021 as an amendment, has suppressed the right of the person that has been intercepted to be notified by the independent authority (after the surveillance has been terminated), for her/him to be able to claim judicial protection (for instance a pecuniary compensation). In other words, the person concerned never knows about the interception, which becomes a blind spot. The amount of discretionary power the domestic legal framework delegates to the State authorities is not very far away from pure arbitrariness of the executive. Without the appropriate checks and balances, the procedural legality of the interception could indirectly cover a political dispute or other obscure purposes. This is clearly incompatible with the strict provision of the Constitution and the ECHR standards.

The European Court of Human Rights has repeatedly highlighted the basic principles regarding the legal framework governing secret surveillance of mobile telephone communications. The surveillance system should “clearly have a basis in domestic law and be justified by national security interests. Given the present-day threats of global terrorism and serious cross-border crime, as well as the increased sophistication of communications technology”, the Court confers to the State a “considerable power of discretion (“a wide margin of appreciation”) to decide on setting up such a system of bulk interception” (Centrum för rättvisa v. Sweden, 25/5/2021, §178). Τhe safeguards have been mentioned and developed in the Roman Zakharov v. Russia case (4/12/2015). The Court gave emphasis to the clear duration and the renewal of the interception, the (ex post) notification and the available judicial remedies for the victim and the requirements about the content of interception requests or authorizations (for instance the name of the person).

To sum up, the current legislative provisions, particularly in the case of the protection of national security, should be revisited and aligned with the European and constitutional standards. In the light of the events, the recent Act of Legislative Content (published in 9/8/2022), drafted by the government and aiming to “address the exceptionally urgent need to adopt regulations to bolster the integrity of the National Intelligence Service” provides that a second Prosecutor of the Court of Appeals approves or declines the request for the waiver. Moreover, the Act entitles the standing parliamentary committee on institutions and transparency to offer an advisory opinion (not a veto) for the appointment of the EYP chief. Nonetheless, more adequate guaranties should be introduced, particularly for the members of the Parliament, in compliance with their exceptional legal regime and immunities.

Besides the rule-of-law problem, the available data indicate that there is another dark side of the National Intelligence Service. The constant increase, during the last decade, of waivers for reasons of national security depicts the abusive practice and the broad interpretation of that concept by the Greek authorities. For instance, in 2021, the annual report of the independent authority (ADAE) confirms that 15,475 judicial orders of surveillance have been signed by the (one and only) competent Prosecutor, whereas 3097 orders were signed for the investigation of serious crimes. We shall  bear also in mind that each of these waivers may refer to more than one suspects.

The wiretapping case raises fundamental questions, normative and factual. After the heated debate of the political leaders in the Parliament, an inquiry parliamentary committee is expected to investigate over the following months all the issues that arise. Nobody contests the republican value and constitutional goal of preserving national interests, particularly in a complex and unstable international environment. There is no doubt that the function of an intelligence service should not be entirely accessible and open to public eyes. Secrecy is the condition for achieving its goals.

On the other hand, the law must not be diluted in the abuse of political power, and national security must not be fatally turned into a risk for our own rights. The authority of the law and the State relies upon its citizens’ trust that there are sound reasons for the limitation of their freedoms. A radical revision of the legal framework is the first step for ensuring transparency and accountability and adjusting to the requirements of the rule of law. Bringing to light the full background of the Androulakis case, the surveillance of a political leader and member of the European Parliament, is not just a matter of compliance to the law or of political responsibility. It is an urgent and vital necessity for the sake of Greek democracy. 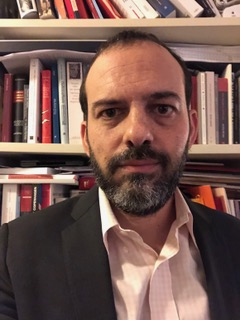 Other posts about this region:
Griechenland No Comments Join the discussion
pixel_not_set
Go to Top