Independence as an Assertion 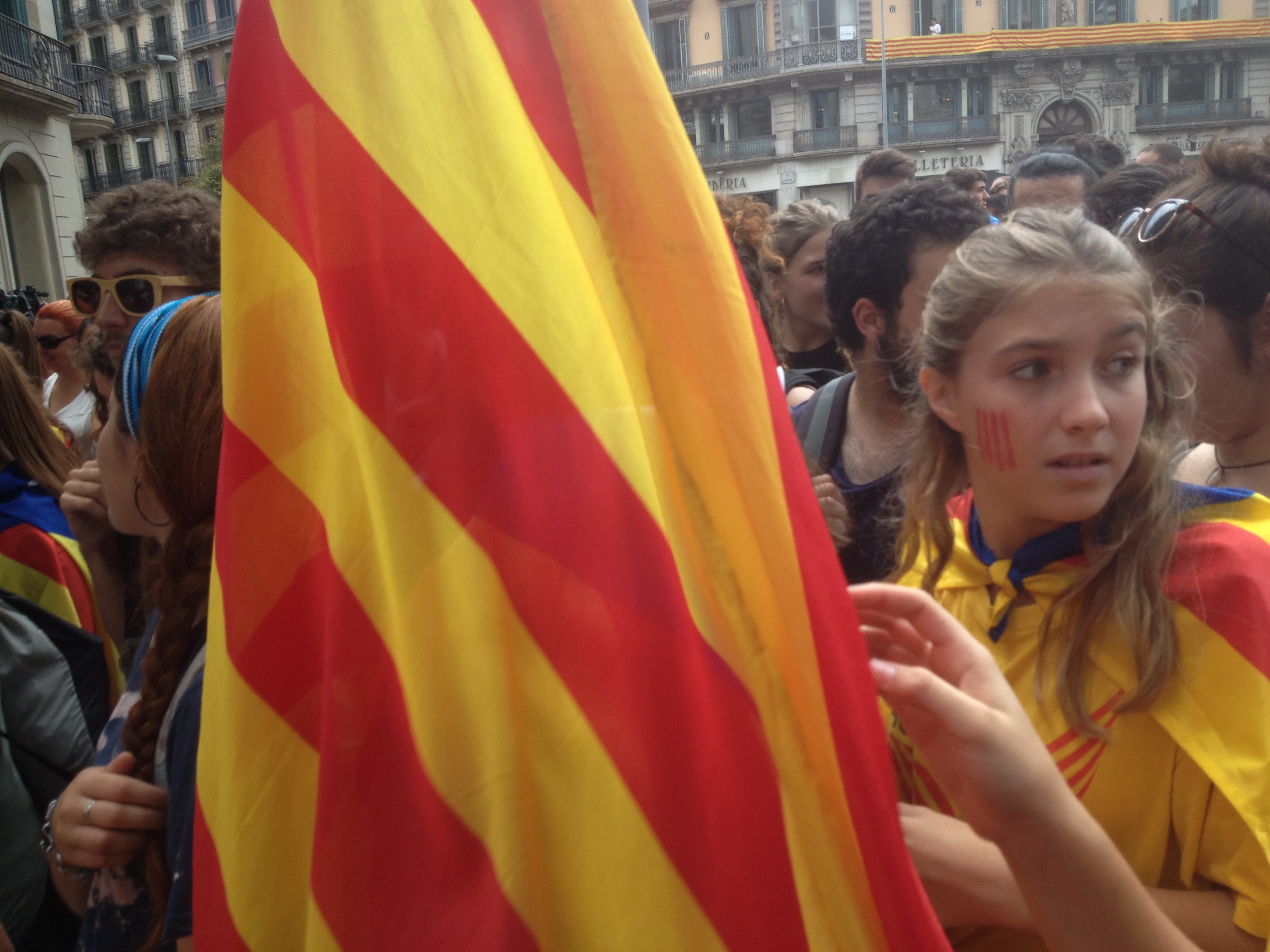 Catalonia’s government asserts that Catalonia wants to become independent and, to prove it, points to something that, depending on one’s inclination, can be interpreted as 2.3 million slips of paper in Tupperware boxes or as the will of the nation. During most of this mind-boggling week it looked as if Spain was inexorably caught up in an automatism of escalation that made some people seriously think of Yugoslavia. Nothing is certain yet, but at least there have been some cautious signs of relaxation in the last few days. The first Independistas publicly call for a truce. The session of parliament on Monday, at which the independence of Catalonia should have been proclaimed – according to the Spanish Constitutional Tribunal „radicalmente nulo y sin valor ni efecto alguno“ (radically void and without value nor any effect) – will be postponed. The toxic effect of King Felipe’s disastrous TV speech – „mode Milošević ON„, as one of my interlocutors shudderingly wrote to me – seems to be slowly waning. In Barcelona, the red-yellow striped furor of the last days seems, at least in some places, to give way to the classic colour of parlay: the Plaça Sant Jaume between the regional government and the town hall is packed with people in white, demonstrating for negotiations under the motto Parlém (Let’s talk). Who knows: maybe we will get off with no more than a fright for now.

One thing that still strikes me as remarkable is that the Catalan nation’s desire for independence is an assertion for which I cannot, for the time being, see any evidence at all. The so-called vote last Sunday was a farce, notwithstanding the undeniable fact that the Spanish central government, with its blundering and bludgeoning, has contributed significantly to its farcicality, nor the equally indisputable fact that this has been a brilliant way to convince large numbers of law-abiding Catalans of the urgency to abandon Spain in the first place. Quite apart from that, with hundreds of thousands of ballot papers disappeared, votes in an unknown number cast twice, thrice, god knows how many times over, no independent electoral commission guaranteeing a correct procedure – you don’t have to be a legalist to come to the conclusion that you can’t possibly ground anything on a foundation as wobbly as this, least of all the fate of a nation. It is clear that millions of Catalan citizens want independence, but it is hardly less clear that millions do not. On the basis of this poll, neither side can expect the other to consider themselves legitimately outvoted. These 2.3 million „votes“ can be seen as yet another demonstration, in the form of paper instead of presence on the streets, and an undoubtedly impressive one as such. But they are by no means a collectively binding decision of Catalonia. Declaring them thus and invoking democracy for it is a contradiction in terms.

Democracy means that the minority must yield power to the majority, which they won’t if they anticipate that the majority will have their way with them afterwards. This is what a liberal constitution is for: to make democratic yield of power to the majority something that can be actually expected of people, in most parts with a powerful constitutional court to back this expectation. This is the model that has made the transition to democracy possible for so many formerly authoritarian countries in Europe and elsewhere in the last six decades, including the Federal Republic of Germany in 1949 and the Kingdom of Spain in 1978.

The Spanish Constitution, as interpreted by the Spanish Constitutional Tribunal, which the Catalan governing majority no longer accepts as binding for themselves, categorically excludes the issue of Catalan independence as a matter of politics, and certainly a unilateral declaration of it. If the regional parliament in Barcelona goes forward with it anyway, that will be a revolutionary act. That happens. Has happened many times, as several thriving European states can testify. But it would still remain for the Catalan government to prove that there is in fact such a thing as Catalan state authority over Catalan territory. That the Catalan people pay their taxes to Catalonia. As opposed to Spain. And that the Catalan state can effectively protect them from being convicted by Spanish courts and arrested by Spanish policemen for not paying taxes to Spain. I’d like to see how they achieve that without entering into a full-blown civil war. Or, in fact, I’d rather not, of course.

I could imagine that only few people in Catalonia really want to see this through to the end. But that’s precisely why the strategy of the independentists makes sense from their point of view. The Spanish repressions that have taken place and are still to be expected, provoked by them, spare them the need to deliver on their promises for the time being and can be used to effectively reactualise the Catalan national myth of sacrifice, so that at some point not just one-third to half of the population, but the Catalan nation as such feels and articulates the desire for liberation from the yoke of oppression. Assertion of independence as a self-fulfilling prophecy with a negative sign, so to speak.

The Catalan independentists are certainly not right-wing populists in terms of content, but operationally speaking they are. We know the pattern: Something outrageous is asserted, and that provokes outrage which seems to justify the outrageous assertion in retrospect and saves the person making the assertion from having to answer for and justify his assertion. The Spanish Government, along with the Constitutional Court and the King, has so far gone out of its way to counter and confirm the independentists‘ declaration of enmity with their own, thereby effectively ensuring that all the independentists need to say is: „See?!“ What makes you think you’re oppressed? „See?!“ What makes you think Spain is a dictatorship and its liberal democratic constitution only a facade? „See?!“ The Partido Popular as an operational Antifa, so to speak, relieving the independists of the burden of justification for their declaration of enmity. You couldn’t make that up.

If this automatism of escalation loses steam or even stops now (which, as I said, is anything but certain), this is not due to the actors involved, but presumably because of an external factor: Companies are moving away from Catalonia in droves. This pulls the rug from underneath the feet of yet another assertion of the independentists, which is that Catalan cultural superiority and its spirit of entrepreneurship and probity is the principal reason of their economic success (sounds familiar to us Germans, doesn’t it?). The important thing here is the effect, though. Escalation is a game of two. It’s a High Noon situation: One on the left, one on the right, both lurk who draws first, and no one can escape from this duel on his own. If a third party joins in, the situation changes fundamentally. In this case, this third party are the markets. The relocation of the Sabadell bank to Alicante cannot be faulted to the scoundrels in Madrid – this has its own economic logic. And to meet this challenge, Barcelona has to come up with something different than frowning under their hat and clutching their holster.

At the beginning of the week I was in Barcelona myself to watch the „referendum“ and its consequences from close. My report of what I have experienced, seen and heard there is here, here and here (in German).

NIKOS SKOUTARIS lists five conditions under which the constitutional crisis in Spain could be resolved – i.a. by creating a constitutionally feasible way to hold a proper referendum on independence, but one which is linked to a supermajority. CARLOS CLOSA MONTERO analyses the prospects of an independent Catalonia to remain or become a member of the EU and disagrees with the assertion that Art. 2 TEU commits the Union to respect Sunday’s vote as an expression of democratic action. And NICO KRISCH shows that the cause of the independentists is not so easily swept off the table from an international law, democratic and constitutional point of view as some in Madrid and elsewhere like to believe.

There has also been a great deal of action outside Catalonia this week, of course – including a ruling by the European Court of Human Rights in Strasbourg on the practice of pushing off refugees at the border of the Spanish enclave of Melilla back to Morocco, as if there were no ban on collective expulsion in international refugee law. DANA SCHMALZ examines what the court has decided – and what it has not (in German).

The new German Bundestag will expand from 598 to 709 seats in parliament for bizarre electoral law reasons difficult to explain, which is why HUBERTUS BUCHSTEIN and MICHAEL HEIN have come up with an innovative proposal: a citizens‘ assembly whose members are determined by drawing lots, that would take the task of reforming the electoral law off the shoulders of the apparently overtaxed Bundestag (in German).

Catalonia in particular and separatism in general is, unsurprisingly, the main topic this week: ZORAN OKLOPCIC interprets the referendum as a constitutional watershed in Spain. VICTOR FERRERES COMELLA, whom I visited in Barcelona on Monday, examines the strategy of the independents and the constitutional quality of their arguments, with predominantly negative results, while ANTONI ABAT I NINET passionately accuses the Spanish government for its policy of a de facto state of emergency. STEPHEN TIERNEY, author of an important book on constitutional referenda, places the Catalan case in the general context of the advancement of referendums as „perhaps the most challenging constitutional development of our time“. MIGUEL ÁNGEL PRESNO LINERA considers the action of the Spanish police to be broadly proportionate. MANUEL MÜLLER puts the quest for independence in so many regions of Europe into a European perspective. DANIEL SARMIENTO shows why the call for an EU sanction procedure under Art. 7 TEU against Spain sounds like a „bad joke“.

ANJA PALM examines the Memorandum agreed between Italy and the Transitional Government of Libya on migration and border control and its worrying implications.

So much for this week. The next one will be very intense and exciting for me: Just in time for the Frankfurt Book Fair, my book „Mit Rechten reden“ (Talking to Rights), written together with PER LEO and DANIEL PASCAL ZORN, will be published by Klett Cotta. The first reviews appeared in the „Freitag“ and „Tagesspiegel“ even before the end of the blocking period, both quite enthusiastic, which makes us happy. If you want to pre-order the book (and read German): here.

All best, and take care,

Maximilian Steinbeis Maximilian Steinbeis is a legal journalist and writer and the founder and chief editor of Verfassungsblog.
5 comments Join the discussion
to receive information about new articles and services of Verfassungsblog.de. I know that I may withdraw my consent at any time. More information in the privacy policy.
Verfassungsblog complies with the new GDPR.
Read about it in our Privacy Policy. I opt-out
permanently of anonymized tracking via Google Analytics on Verfasssungsblog.de. This will create a cookie on your device to save your decision.
Go to Top