You can’t get elected to change the constitution. The new German „traffic light“ coalition has won a majority in the Bundestag, can govern, pass and change laws. But the legal basis for all this, the constitution, is beyond their reach. According to Article 79 (2) of the Basic Law, the constitution can only be amended by a two-thirds majority in both chambers of Parliament, which is why normally the elected government majority needs the votes of the outvoted, the opposition, to do so. And that is a good thing, because it ensures that the rules of the game in the competition for the majority and for the latter’s dealings with the minority cannot be manipulated by the temporary winner to improve his chances and thus devalue the whole game, as has become the sad rule in so many former democracies all over Europe in recent years.

Of course, this is not quite true. The elected majority can engage in constitutional politics, of course, and indeed the red/yellow/green coalition agreement contains quite a bit of that. The coalition intends to strive for some proper changes of the constitutional text (race as constitutional concept: out. Prohibition of discrimination on the grounds of sexual identity, voting rights from the age of 16 in federal elections, children’s rights: in), but also for changes on the sub-constitutional level of constitutional law, the nuts and bolts of the Federal Republic’s power-exercising and law-making machinery, which are regulated in ordinary federal laws and thus are well within the reach of a simple governing majority. Electoral law, parliamentary law, party law, things like that.

Electoral law, for example: the coalition announces another reform within a year. The aim is to keep the Bundestag, with currently 736 seats already grotesquely overpopulated, from ballooning into unmanageable dimensions in future elections, as the divergence between shrinking proportionate vote shares on the one hand and directly won voting district mandates on the other keeps growing, and thus the number of additional mandates necessary to keep those so-called surplus mandates (Überhangmandate) from distorting the proportional composition of the Bundestag. Their reform will reduce the number of seats „in the direction of the standard legal size“ of 598, the coalition announces.

The last reform of the Federal Election Act has only been in 2020 and had been enacted by the so-called „grand coalition“ (nothing grand about it) of CDU/CSU and SPD against the will of the opposition at the time. The opposition filed a motion for constitutional review at the Bundesverfassungsgericht in Karlsruhe: In their view, the reform has made the electoral system, already quite a puzzle to begin with, so convoluted and impenetrable that it has become utterly hopeless for the citizens to figure out the effect of their most noble democratic act. In August, weeks before the federal elections, the Federal Constitutional Court declined to temporarily halt this reform by interim injunction, but it did indicate that it found the concerns of the opposition at the time not entirely implausible.

Two of the then opposition parties are now in government, two of the then governing parties are now in opposition. One of these is the CSU, the Bavarian twin of Angela Merkel’s CDU. It was mainly the CSU that forced this brain-bending electoral law reform because it has so many surplus mandates since its proportionate vote share slumped to 30%+ while it still wins almost all direct mandates in Bavaria. To keep those was top priority for the CSU. The liberal, the Green and the Left opposition parties had presented a counter-proposal that would stop the bloating of the Bundestag through surplus and compensatory mandates by reducing the number of constituencies and thus the number of direct mandates from 299 to 250 and increasing the number of total mandates from 598 to 630. But that was a no-go for the „grand coalition“.

Although the SPD had voted for that reform in 2020, I would be surprised if they made great efforts to defend it now. That doesn’t necessarily mean that they share the Green/liberal inclination to resolve the conflict by cutting the number of direct mandates, of which the SPD possesses quite a few itself, particularly in the Northeast. Their commitment that the reform should be completed „within the first year“, however, can perhaps be interpreted as an indication that they expect these differences to be overcome quickly.

If this were now to become the norm, that the majority can mess around with the nuts and bolts of the power-exercising and law-making machinery against the will of the outvoted minority, then I would find that extremely disturbing. Two years ago, I wrote a scenario about what a charismatic party leader in possession of a simple majority in the Bundestag can do to unhinge the entire constitutional order within one legislative period on the basis of a single election. Of course, I do not acutely suspect the „traffic light“ coalition of pursuing any such aim, nor the CDU, for that matter (CSU? not so sure). But four years go by quickly. And who knows what will come then.

The GroKo electoral law reform is not all-out majoritarian as it provides for an commission to comprehensively review the need for reform of parliamentary and electoral law, explicitly including the problem of the bloating of the Bundestag. This commission was set up in April, consisting of eight MPs from all parliamentary parties and eight experts, and it is to continue its work in this legislative period. According to the coalition agreement, its topics are to be: equal representation of women and men in parliament, the bundling of election dates, the extension of the legislative period from four to five years and the limitation of the term of office of the Federal Chancellor. Whether the electoral law reform is also to be negotiated in this body, I don’t know; the coalition agreement seems to indicate otherwise. Perhaps this means that the coalition doesn’t want to find common ground with the opposition about this any longer? We shall see.

There would be so much more to say about this coalition agreement, especially about its European chapter, which promises the most exciting things for the further development of the EU constitutional setup. But this editorial is already getting far too long. So now to… 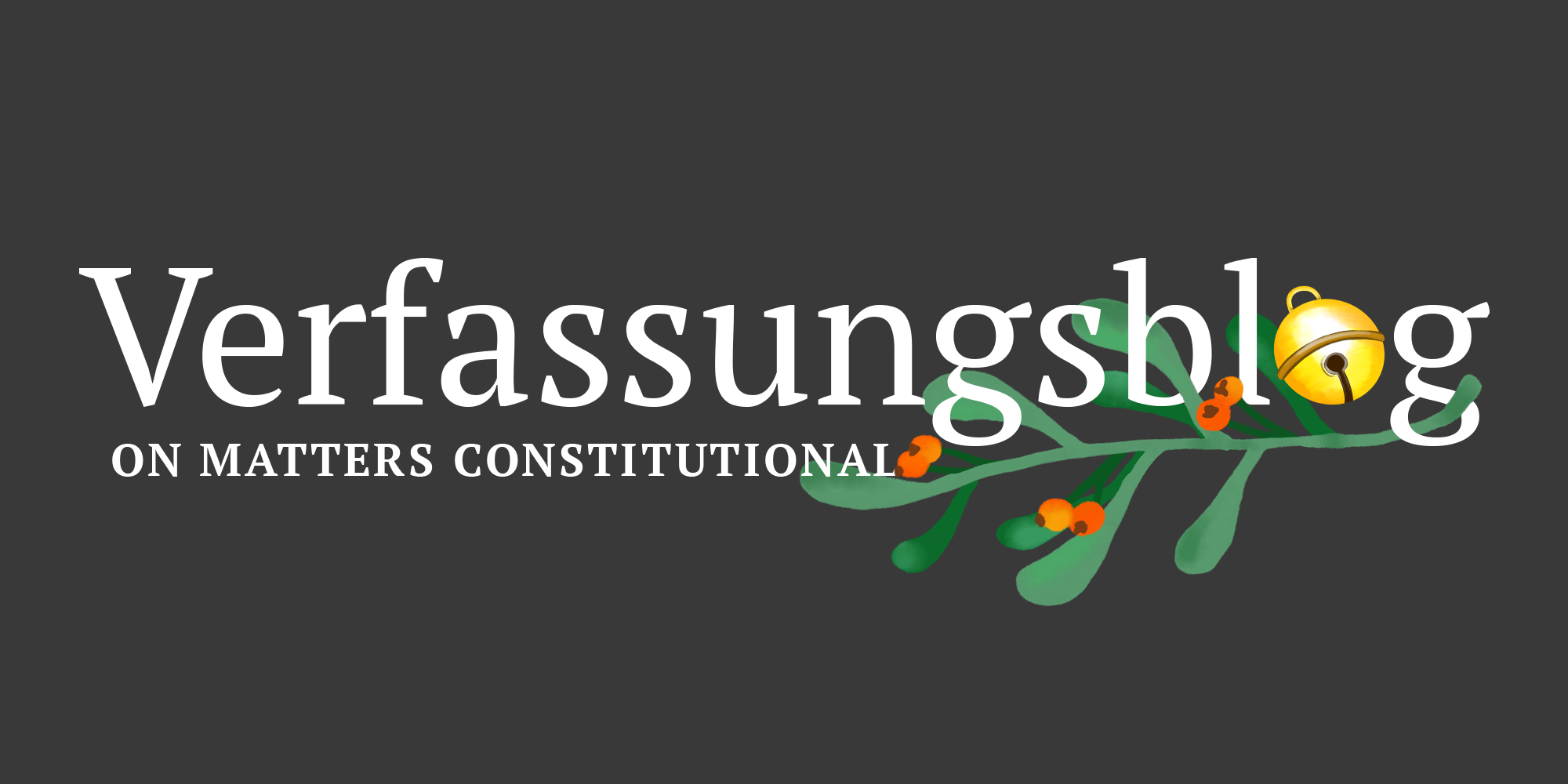 We have prepared a Christmas surprise for you. We will pack 200 parcels, and you will get one, too, if you book our Steady Christmas special package and support us with 5 euros a month (while stocks last, i.e. these 200 parcels, shipping within EU only). We won’t tell you what’s inside, but we’re having lots of fun designing the content right now, and hopefully so will you unpacking it. So, either for yourself, or if you are in need of a present idea for someone else: that would be something, wouldn’t it? Or perhaps your grandma or aunties have already inquired what gift would make you happy? This, we believe, is a great opportunity for everyone involved. Convinced? Then this way, please.

„We are introducing the controlled dispensing of cannabis to adults for consumption purposes in licensed shops,“ says the traffic-light coalition agreement. How all this is to be implemented in concrete terms remains to be seen. What is being discussed surprisingly little is the question of whether this is even possible under European and international law. ROBIN HOFMANN describes the hurdles.

In the meantime, the COVID wave is piling up higher and higher, a nationwide vaccinated-or-recovered-customers-only policy seems to be the order of the day, and the unvaccinated are held responsible for being so. UTE SACKSOFSKY examines the question of how the unequal treatment of vaccinated and unvaccinated people is to be measured, and with what result.

Do the unvaccinated have to go to the end of the line in the triage case? We hear this more and more often. The taboo is becoming less effective – even in jurisprudence, to the horror of WEYMA LÜBBE.

In Switzerland, the Academy of Sciences has published a study on the role of science in Switzerland’s response to the COVID-19 pandemic. According to this study, there is no legal basis in Swiss legislation for scientific policy advice. MONIKA PLOZZA argues against this: the individual members of scientific advisory bodies are protected by their freedom of research in communicating their findings, and the population has a right to evidence-based policy.

Also in Switzerland: This Sunday, voters will decide whether the judges of the Federal Supreme Court, who have so far been appointed according to party proportional representation, should in future be appointed in a rather revolutionary way, namely by drawing lots. ANNE SANDERS and ELISABETH FALTINAT think this idea is highly interesting, not only for Switzerland but for the whole of Europe, where the independence of the judiciary is coming under increasing pressure.

Speaking of dependent judges: The Polish „Constitutional Tribunal“ found this Wednesday that the Xero Flor ruling of the Strasbourg Human Rights Court of May this year violates the Polish Constitution. So after EU law, the PiS government is now also taking on international law. OLIVER GARNER and RICK LAWSON report on the background to this so-called judgement.

Not only in Poland, but also in Hungary, judges now have to expect disciplinary proceedings if they send the wrong questions to Luxembourg. PETRA BÁRD analyses an important ruling by the ECJ on this and on the question of whether a higher court can overrule a lower court’s referral.

If you want to draw attention to a conference, a job offer, a CfP or a book release, you can do so on Verfassungsblog. Our weekly editorial is sent out to more than 13,000 constitutionalists world-wide!

Recently, the new Chief Prosecutor at the International Criminal Court, Karim A. A. Khan, closed the preliminary investigation against Colombia for possible crimes in the guerrilla wars on grounds of complementarity. This is not the first time that the prosecuting authority has chosen such a path. It has not been without criticism – for NORMAN PAECH an occasion to take a closer look at this practice.

The EU Treaties oblige the European Central Bank to support general economic policy in the EU. Yet the ECB has long ignored this part of its mandate. In the recently completed Monetary Policy Strategy Review, it is only briefly mentioned. NIK DE BOER and JENS VAN ‚T KLOOSTER consider this neglect of the ECB’s secondary mandate illegal.

In Greece, two human rights defenders face trial, allegedly for aiding and abetting the illegal entry of third-country nationals. EIRINI FASIA considers the accusations to be exaggerated and the whole procedure to be another example of the ongoing criminalisation of humanitarian assistance to refugees and asylum seekers in Europe.

Many German federal agencies have had the Nazi past of their staff investigated. The historian Friedrich Kießling and the criminal lawyer Christoph Safferling have now written an institutional post-war history of the Office of the Federal Public Prosecutor. The thorough investigation brings to light a wealth of revealing details. KLAUS FERDINAND GÄRDITZ has written a review.

The UK Supreme Court has delivered its eagerly awaited judgment in Lloyd v Google – a case of great significance for the development of data protection law in the UK. ELENI FRANTZIOU is not too happy about the decision.

That’s all for now. Until next week, all the best, stay healthy and don’t infect anyone!