Rise together, fall together 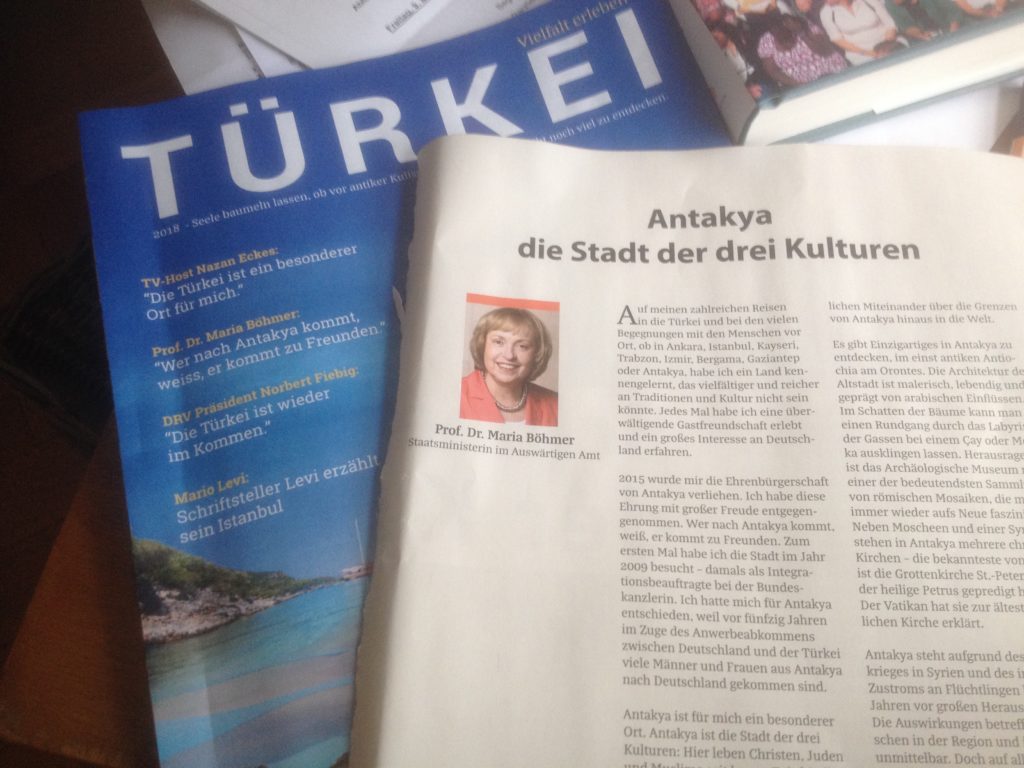 „Whoever comes to Antakya knows they come to friends.“ With these warm words, Maria Böhmer, the current German Undersecretary of Foreign Affairs, invites her readers to put aside their fears and travel to Turkey, to Antakya at its southernmost point near the Syrian border. There, „in the shade of the trees“, croons Madam Undersecretary, „you can end your tour through the labyrinth of alleys sipping at your çay or kahvesi„. The cabinet member’s recommendation, published in an advertising newspaper supplement by the name of „Turkey – experience variety“ this week, adds a jaunty dash of savoir-vivre to the travel warning of her very own Foreign Office, according to which visits to the province of Hatay, of which Antakya is the capital, are „urgently discouraged“ because of „enhanced risks for travellers“ who in general must expect to be „arbitrarily arrested … in all parts of Turkey, including the regions frequented by tourists“.

Even less concerned about human rights than Turkey is the mass-murderer and war criminal Bashar al-Assad down south, whose idyllic fiefdom in Syria, pacified by the tireless hands and guns of the army and the secret police, was visited last week by a number of German MPs from the far-right AfD. How great that must have been! Not one barrel bomb dropped on their heads. Absolutely safe to send the refugees back there. Another çay or kahvesi?

At the beginning of this week, I attended a conference, organised by the German Bar Association, about Turkey and the European Court of Human Rights. The Strasbourg Court has so far dismissed all complaints by Turks who, after the coup attempt in 2016, lost their freedom, their livelihood and their dignity under the state of emergency. The reason: the plaintiffs had not yet exhausted their domestic legal remedies in Turkey. For sacked civil servants, that remedy exists since January 2017 in the form of a government commission, a bottleneck through which they must squeeze before they can go to court, and once they do they face a judiciary which has been thoroughly purged itself and is accordingly reluctant to come to their rescue, until ultimately they reach the Turkish Constitutional Court which has declared itself incompetent to review any emergency decrees and has dismissed two of its own members for being linked, according to „information from the social circle“ (sic!), with the Gülen organization. In short: domestic remedies in Turkey are a cynical joke, and everyone knows it.

How long does the Court believe it can keep the victims of one of the most brutal regimes ever to have enjoyed the privilege of an ECHR membership at arm’s length in such a Kafkaesque manner? It’s not as if there wasn’t a lot at stake for the Court, as well. It is understandable, as the former Turkish ECtHR judge Riza Türmen said at the conference, that the Court is afraid of being overwhelmed by the expected wave of lawsuits from Turkey. But if it fails to protect its own fundamental values, that may cause an much more fundamental damage to its credibility.

Give the Court time, pleaded the former ECtHR Deputee Registrar Michael O‘ Boyle and the University of Essex law professor and Human Rights litigator Francoise Hampson. Perhaps our expectations will already be met very soon: On 20 March the ECtHR will hand down its verdict on the case of Altan and Alpay v. Turkey. The plaintiffs are two journalists who were arrested after the coup attempt and have been held in pre-trial detention ever since. This is the same case in which the Turkish Constitutional Court actually, to the surprise of all, did declare the detention unconstitutional, just to be point-blank ignored by the criminal courts.

The case is certainly a good opportunity to send a clear signal to Ankara. But much will depend on what Strasbourg makes of it. If, for example, the Court concludes that pre-trial detention infringes the right to freedom in Art. 5 (1c), Başak Çalı, international law professor at the Hertie School of Governance, pointed out that it might end up in the same situation as it did in the Mammadov v. Azerbaijan case of 2014 when, after it found Mr. Mammadov’s pre-trial detention illegal, the detention was ended swiftly by convicting the poor fellow in trial. It will also be extremely interesting to hear what the Court has to say about Article 13 (right to an effective remedy), Article 15 (emergency measures) and Article 18 (bad-faith restrictions on human rights).

But the case is also an opportunity to send a signal to the whole of Europe. There is plenty of reason to do so. In Switzerland, the right-wing populist SVP party is currently drumming up support for its so-called „self-determination initiative“, which, if successful, would most likely force Switzerland to be in constant breach of its Human Rights obligations. Denmark, which is currently chairing the Committee of Ministers of the Council of Europe, intends to submit to the member states‘ vote in April a draft declaration that shows much interest in strengthening the member states‘ position and remarkably little in enforcing their implementation of the Court’s decisions. Russia has already successfully neutralized the Court in virtually all politically explosive cases, and in the UK withdrawal from the Convention on Human Rights has become an established topic of political debate. The case of Turkey comes as an opportunity to demonstrate how wrong and self-centered the widespread view is that the Convention and the Court are nice but expendable pet projects of liberal elites to help all sorts of minorities live out their sensitivities at the expense of the common good. It demonstrates that Convention and Court are all that is still there when your own domestic institutions have vanished under the thumb of an autocratic ruler. Human Rights protection from Strasbourg: it has never been more valuable. Or in the words of Başak Çalı: Turkey and the ECtHR rise together. Or fall together.

The other body of judicial protection in Europe, the European Court of Justice in Luxembourg, caused quite a stir this week with its thunderous Achmea judgement: it is about investor protection, it is about arbitration courts, it is about the integrity of the Union’s legal system and the powerful position of the European Court of Justice watching over it. DANIEL THYM interprets the Achmea ruling as a deathblow for autonomous investor-state dispute resolution bodies (German, for an English version of the article see here). STEFFEN HINDELANG, on the other hand, reads the decision rather more cautiously and would not consider it an established fact just yet that arbitration courts will no longer play a role in intra-EU investment protection agreements.

Our series of questions and answers provided by LAURENT PECH and KIM LANE SCHEPPELE on the EU’s ability to defend itself against the disintegration of the rule of law in Poland continues this week – including a question the EU and particularly Merkel’s and Juncker’s European People’s Party is hard pressed to give a satisfactory answer to: „Why Poland and not Hungary?“

In Austria, the new right-wing government sets out to appoint judges of their own liking to the Austrian Constitutional Court, the oldest of its kind in the world, designed by the titanic Hans Kelsen back in the day. The ÖVP/FPÖ coalition’s candidate is Andreas Hauer, an administrative law professor from Linz. INES RÖSSL and PAUL HAHNENKAMP, within a historical account of political appointment decisions in Austria, take a look at Professor Hauer’s scientific publication record and find a number of rather chilling statements (German).

And Poland again: Katowice will be the scene of the next climate conference in late autumn, and to make sure that there won’t be any trouble, the Polish legislator has without further ado banned all participation in spontaneous assemblies during the COP24. HANNAH BIRKENKÖTTER examines in what ways this law infringes fundamental rights.

In Pakistan, the Supreme Court has declared the disgraced former Prime Minister Nawaz Sharif incapable of presiding over a party and nominating candidates for parliamentary elections. ADEEL HUSSAIN comments on the Court’s self-assumed role as a guardian over Muslim moral probity in politics.

US President Trump threatens to terminate the nuclear agreement with Iran. Is he even allowed to do that under international law? PAULA FISCHER and BERND SCHOLL see reasons to answer this question in the negative (German).

STEPHAN KLENNER is investigating whether electing Andrea Nahles as chairperson of the Social Democratic Party by primary election instead of party congress resolution would be in accordance with the German party law (German).

DIRK VOORHOOF and DANIEL SIMONS discusses a decision of the Strasbourg Human Rights Court in a Russian case on the rights of journalists who report about a demonstration and, while doing their job, get themselves arrested by the police.

In the first two months of 2018, DANIEL SARMIENTO has observed a European Court of Justice that has been „unashamedly picking up the reins of EU constitutional principle-setting“.

STEPHEN WEATHERILL reflects on what the British Prime Minister Theresa May might have had in mind when speaking of „mutual recognition“ between the EU and the UK.

EUGENE VOLOKH reports on a lawsuit in the US state of Oregon alleging that it amounts to age discrimination not to sell weapons to a 20-year-old.

NICOLETTA PERLO, on the occasion of the momentous parliamentary elections, looks back on the long and tortuous history of electoral reforms in Italy, and the election outcome makes JEAN-PHILIPPE DEROSIER think of Sergio Leone and „Western Spaghetti“ (both in French).

ITZIAR GÓMEZ FERNÁNDEZ asks why there are so few women on the bench of the Spanish Constitutional Court (Spanish).

JULIANO ZAIDEN BENVINDO questions whether the Brazilian judiciary should „moralize“ the elections.

So much for this week. All the best, and take care,