Have you ever been to Zittau? No? Me neither, don’t worry. No one has ever been to Zittau. Zittau is the most remote place you can imagine, the outermost periphery, the finis terrae of Saxony, beyond which there is nothing, only…

Yes, what actually is there beyond Zittau?

Or, if you’re from Warsaw: what is there beyond Bogatynia? Or if you’re in Prague: what’s behind Hrádek nad Nisou?

Looking at the map, two things strike me: First, what does periphery actually mean here? Remote in relation to what? Directly to the east of Zittau begins Poland, directly to the south the Czech Republic. The same applies mutatis mutandis to Bogatynia in Poland and Hrádek nad Nisou in Czechia. This place is right in the middle of Europe. It could hardly be more central.

Secondly: See for yourself. 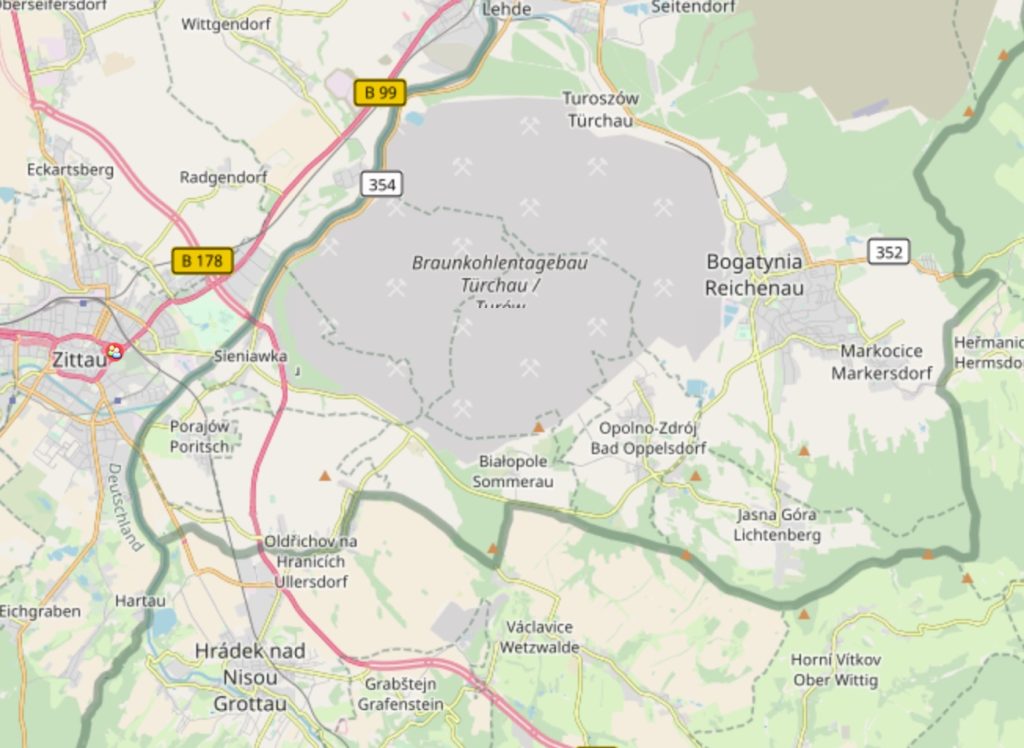 Braunkohletagebau, probably one of the most German words existing, means opencast mining for lignite coal: basically the removal of complete landscapes to excavate and turn into electric energy immense amounts of particularly dirty carbon-not-yet-dioxide. The mining field of Turów is currently the object of a legal dispute between the Czech Republic and Poland before the ECJ. The operating permit had expired in 2020 and was extended by the Polish authorities until 2026 without conducting a regular environmental impact assessment. This is particularly delicate because the impacted environment in question is quite predominantly – see the map – not in Poland, but in Germany and the Czech Republic.

For this German and Czech environment, a lot is at stake. According to expert calculations, if opencast mining continues as planned until 2044, there is a risk of ground subsidence of half a metre or more in the city centre of Zittau. On the Czech side of the border, the groundwater level threatens to sink to such an extent that access to drinking water is at risk. In other words: on this side of the border, dredging is taking place, and on the other side, wells are going dry and houses are collapsing. It is hard to show more poignantly what perverse institutions state borders are, if you really take them at their word: as markers of territory where one state’s responsibility ends and another’s begins.

What a relief there are no such borders here! What a relief that the states involved all share the same supranational space of freedom, security and justice! The European Union, of course, once founded as a commitment by the member states to stop enriching themselves at the expense of each other, as a legal obligation, guarded by the Commission and enforceable before the European Court of Justice.

In February 2021, the Czech Republic filed a lawsuit against Poland. It is extremely rare for one member state to sue another and has only happened nine times in all EU history, and never before over environmental policy. The Czech Republic applied for a temporary injunction and got it: The Vice-President of the ECJ s Rosario Silva de Lapuerta ordered last Friday that lignite mining in Turów be stopped until the ruling is issued.

Meanwhile, however, the excavators keep digging. The Polish government is not in the least inclined to obey the ECJ Vice-President’s ruling. Instead, it has started negotiations with the Czech government to see if it can be persuaded with a pile of money to withdraw their lawsuit.

What is it we are gradually getting used to here?

The ECJ issues an order which is simply disregarded. Not for the first time either. In 2017, the ECJ ordered Poland to temporarily stop logging in the Bialowieza primeval forest. The PiS government only condescended to comply with this order when the ECJ imposed a penalty payment of 100,000 euros for each day of non-compliance. That was four years ago. Since then, the PiS government has left not the shadow of a doubt that it intends to honour its EU law obligations exactly as long and as far as it finds it useful, not just when it comes to inconvenient judges, but in general and on principle. So, what do we need EU law for at all then? Good question.

The EU is creating a legal basis to sanction certain cases of rule of law violations by cutting transfer funds. But the Council swiftly declares that the Commission will only start sanctioning after a) the ECJ has approved the whole mechanism and b) the Commission has defined guidelines. Both the suspensive effect of the ECJ proceedings and the necessity of any directives as a precondition to start sanctioning are plucked out of the blue as far as European law is concerned, but hey: the masters of the Treaties want it that way! But there’s more: the chief guardian of the Treaties, Commission President Ursula von der Leyen, is in that capacity herself a member of the European Council and has personally and expressly agreed to this suspension of her own responsibility.1)

The Commission and the member states thus have a free hand to distribute the 672 billion euros of Covid-19 reconstruction funds without having to bother with these cumbersome rule of law issues. Poland can look forward to 23.9 billion euros in non-repayable grants. Only the European Parliament keeps pestering the Commission about its duty to defend the Treaties against and to enter into conflict with Poland, and wants to take the Commission to the ECJ for failure to act under Article 265 TFEU if it does not at least activate the very first stage of this already terribly protracted rule of law mechanism by 1 June and inform the Member States concerned in writing that it finds their respective state of the rule of law amiss (Article 6(1) of Regulation 2020/2092). Oh yes, says the Commission, the necessary talks with the Member States are going to begin soon. Some time „in early autumn“ most likely.

Thanks for valuable input to Walther Michl

The ink of the BVerfG’s seminal climate change ruling is hardly dry, and already the next judicial hammer falls: the ruling of the District Court of The Hague in Milieudefensie v Royal Dutch Shell. A revolution, says ANDRÉ NOLLKAEMPER, and the first judgement of its kind in which a multinational corporation is held responsible for its contribution to climate change, among other things on the basis of international law. With respect to the BVerfG ruling, CHRISTIAN CALLIESS examines how the Karlsruhe reasoning relates to its „Elfes“ jurisprudence. And KATJA GELINSKY and MARIE-CHRISTINE FUCHS analyse when and which case law from Latin America the Federal Constitutional Court cites and what this reveals about the court’s interest in a transnational legal dialogue.

AMBREENA MANJI places the no less epoch-making ruling of the High Court of Kenya on the „basic structure doctrine“ and on the preconditions for fundamental constitutional amendments in a historical context.

In August, a new protocol to the European Convention on Human Rights will enter into force, raising the bar of admissibility for the ECtHR even higher. BLAGA THAVARD explains what rather nasty consequences this could have.

The EU is responding to growing geopolitical rivalry in trade policy. In recent weeks, the Commission proposed a regulation to combat foreign subsidies and launched a public consultation on an „anti-coercion“ instrument. THOMAS VERELLEN thinks a new balance between democratic accountability and efficient decision-making is needed in the EU.

In Brazil, the lower house of parliament passed a controversial bill on environmental licensing that could lead to increased deforestation in the Amazon, according to DANIELLE HANNA RACHED and MARCO ANTÔNIO MORAES ALBERTO.

When the WHO declared a pandemic on 11 March 2020, the spread of the virus in China was already under control. Since then, Beijing has been actively engaged in health diplomacy. For MORITZ RUDOLF, this is China’s way of displaying itself as a „responsible great power“.

In Spain, a new law entitles workers to be informed about how algorithms influence their working conditions and determine access to employment. CARMEN VILLARROEL LUQUE thinks the law is ambitious. Whether it will be a success, however, remains to be seen.

On 20 May 2021, the Federal Constitutional Court did not accept for decision a constitutional complaint by prominent musicians against the Covid-19 „Bundesnotbremse“ (federal emergency brake). For JAKOB HOHNERLEIN, the decision is a missed opportunity. The Chamber does not dare to demand from politics to keep art (beyond digital formats) possible even under pandemic conditions with comprehensive protection concepts.

In its draft platform for the Bundestag elections, the FDP calls for a reform of public broadcasting. KARL-E. HAIN clarifies that reforms are constitutionally possible as long as they respect the functional mandate and the programme autonomy of the broadcasters. The transformation to digital must not lead public broadcasting into a digital niche.

If you want to draw attention to a conference, a job offer, a CfP or a book release, you can do so on Verfassungsblog. Our weekly editorial is sent out to more than 11,000 constitutionalists world-wide!

That would be all for this week again. We couldn’t do what we are doing it without your support. If you are already a Steady member, we bow our heads in gratitude. If you want to become one, this way please. If you don’t want to do either: just throw us a reasonable amount of your choosing into our Paypal hat or transfer it to our account (IBAN DE41 1001 0010 0923 7441 03).

Explore posts related to this:
ECJ, PiS, Rule of Law

Explore posts related to this:
ECJ, PiS, Rule of Law