First Sweden, then Italy: parties are winning elections all over Europe at the moment that until not very long ago would have been considered right-wing extremist. The „Sweden Democrats“ were founded by SS veterans and neo-Nazis. The „Fratelli d’Italia“ are directly descended from Mussolini’s fascists. That is where they come from – but where, it seems, they are no longer. Between their origins and where they are today, it seems, the distance is widening, while that between the so-called centre and them is narrowing. The extreme seems to be moving towards the middle and losing their extremeness as they do. Without directly denying their extremist origins, they are striving to rid themselves of anything that makes them identifiable with them. Their politics, their programmes, their public statements become less and less suitable for bipartisan scandalisation. What does extreme even mean under these circumstances? They’re just right-wing, aren’t they? Which you may find horrible and dangerous. If you’re left-wing. Rather normal, isn’t it? Right-wingers forming a government alliance with right-wingers, what’s wrong with that?

Of course, you can disbelieve the de-extremisation of the extreme right and think it’s just camouflage: They only pretend to lull the centre into a sense of security, while in reality they are exactly as extreme today as they were 100, 50, 30 years ago. But to claim what one cannot prove is, at best, a helpless and inconsequential confessional gesture and, at worst, an essentialist move as one would be well advised to leave to the right to begin with. Either way, it obscures the view of what is perhaps actually a lot more interesting story: what if it the right and the extreme right have indeed become pretty much indistinuishable? If the distinction between good old state- and Europe-supporting conservatives and bad, dangerous, unsavoury right-wing extremists is no longer distinguishing much at all – what does that mean? 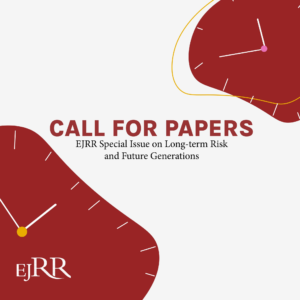 The European Journal of Risk Regulation is calling for expressions of interest from potential contributors by October 15 for a special issue on Long-term Risks and Future Generations, for more details see here.

As a category of German Verfassungsschutz, the distinction between the centre and the extreme has always been a questionable one. It defuses the paradox of curtailing freedom to protect freedom by inserting it with a rule-exception relationship, with the „centre“ of the righteous and respectable enjoying their liberties as a rule, confirmed by the exception of those who, on the basis of their distance from this alleged centre, can be qualified as left-wing extremist/right-wing extremist/Islamist, people who have little in common amongst themselves except being far out there from the centre’s point of view. Against these people, the constitution must be protected according to the law, as the very constitution that is supposed to be protected demands, but the state of exception, and who decides according to which criteria and with which powers, is notoriously hard to legalise. On top of that, the authorities who patrol the „Boden des Grundgesetzes“ (premises of the constitution) have long since interspersed the enemy territory beyond the border with so many informers and spies that the border line has become widely irrecogniseable in many places. Twenty years ago, when the government tried to have the neonazi NPD party banned by the Bundesverfassungsgericht, the whole exercise collapsed because the NPD turned out to be staffed with so many state informers that it was simply no longer clear where the protection of the constitution ended and what the constitution is supposed to be protected against began. At that time, the neonazi terror organisation NSU had already begun its series of murders; enemies of the constitution as clear and extreme as one could possibly imagine, but the Verfassungsschutz, up there on its watchtower, somehow still allowed them to go their murderous ways unhindered. We still don’t know exactly how and why that happened. But we do know who is withholding intelligence (sic!) from us.

The inside and the outside blur into one another. Anyone who has watched Viktor Orbán at work over the last twelve years knows that it is not necessary to overthrow and overrun the liberal democratic constitutional order from the outside in order to destroy it. It is much more efficient to detect and exploit its internal weaknesses until it turns against itself and becomes a mere tool of the government’s hold on power. When Orbán started this, the extremists were with Jobbik or even further out. Orbán’s Fidesz party represented the bourgeois-conservative centre.

In Germany, the NPD has in the meantime become too insignificant even to be banned. It has been replaced by the AfD, which, with hands sweating with zeal, presents itself as the most ardent supporters of the Basic Law the republic has ever seen (I won’t link to it, but if you don’t believe it and have a robust enough stomach, google „Stephan Brandner Gemeinsam für das Grundgesetz“).

I am not surprised that the right is finding it easy to win elections right now. In times like these, many people in Europe are attracted by the promise that they can for a while longer be spared the imposition of having to re-internalise all those externalised costs of our food, energy consumption, social, foreign and economic policies. The less well someone is off, the bigger the attraction, I imagine. Which is what makes it so hard for the left.

MAX PLANCK LAW connects 400 researchers, 20 Directors, and 10 ten Institutes across Germany and Luxembourg to form one of the world’s largest networks for legal research.

Find out more about our academic opportunities here and keep up-to-date with our numerous activities, including courses open to the public, by subscribing to our newsletter here.

Meanwhile, the extreme right in Europe has realised what an enormous opportunity it has here: All they have to do is stop being extreme, and all sorts of real power opportunities open up for them. This is not particularly difficult for them, especially since the historical border markers between them and the conservatives become less relevant for positioning themselves on current political issues, as the time distance to the great national crimes of the past grows, and any well-founded suspicion of anti-Semitism can be dispelled in the most convenient way by paying a visit to Yad Vashem and unreservedly supporting Israel and its occupation policies. In return, they get access to real state power, and they would not be the extreme right if they did not use all the opportunities that present themselves, strictly in conformity with the constitution, so as never to have to give it up again.

Whether they succeed in doing so depends not least on how vulnerable the constitutional order they meet with is. And that, in turn, depends not least on how clearly society in general and its conservative section in particular see what they are up to with respect to this constitutional order. The distinction between the centre and the extreme makes this view dimmer, not clearer. Giving it up is not a loss.

On September 25, 2022, Italians voted for a new government, led by Giorgia Meloni’s right-wing party, Brothers of Italy. ANTONIA BARAGGIA offers a first analysis of the elections. CARLO FUSARO looks at the probability of the new government making changes in the constitutional field. And FRANCESCO PALERMO analyzes Giorgia Meloni’s electoral programme.

TILL PATRIK HOLTERHUS & SVEN SIEBRECHT assess the chances of success of legal action against the trusteeship of Rosneft Deutschland.

MAARTEN DEN HEIJER explains why, under refugee law, EU countries should seriously look into asylum claims of Russian draft evaders instead of issuing blanket refusals. TOM DANNENBAUM argues that the well-founded fear to be forced to commit war crimes is a legitimate basis for the claim for asylum. ALEKSANDRA JOLKINA raises the issue of how Schengen visa restrictions for Russian citizens severely affect Russian family members of EU citizens and residents.

This could be your ADVERTISEMENT!

You have a job to offer? Planning a conference? Want to publish a CfP? Advertise your book release?

What better way than booking an ad in the VB editorial – and support Verfassungsblog by it?

Do get in touch!

ÁGNES KOVÁCS gives an overview of the latest scandal around the Hungarian Supreme Court and its Chief Justice. ANNA LUKINA responds to BALÁZS MAJTÉNYI’s essay on amoral law in Hungary and its invalidity.

PETER ČUROŠ takes stock of the reform of the judiciary in Slovakia over the past two years in two parts (here and here).

LEONID SIROTA, in the wake of the demise of Queen Elizabeth, explains why it’s a good thing that unanimous provincial consent would be needed for Canada to become a republic.

YASSAR AULIA & AZEEM AMEDI analyze the democratic and constitutional demise in Indonesia under the administration of President Joko Widodo.

That’s all for now. All the best, and see you next week!